“Foreclosing a patentee from enforcing all its properly asserted patent claims could violate the due process clause. But the Federal Circuit has held that district courts may limit the number of claims as long as they provide the patentee with a ‘safety valve.’” 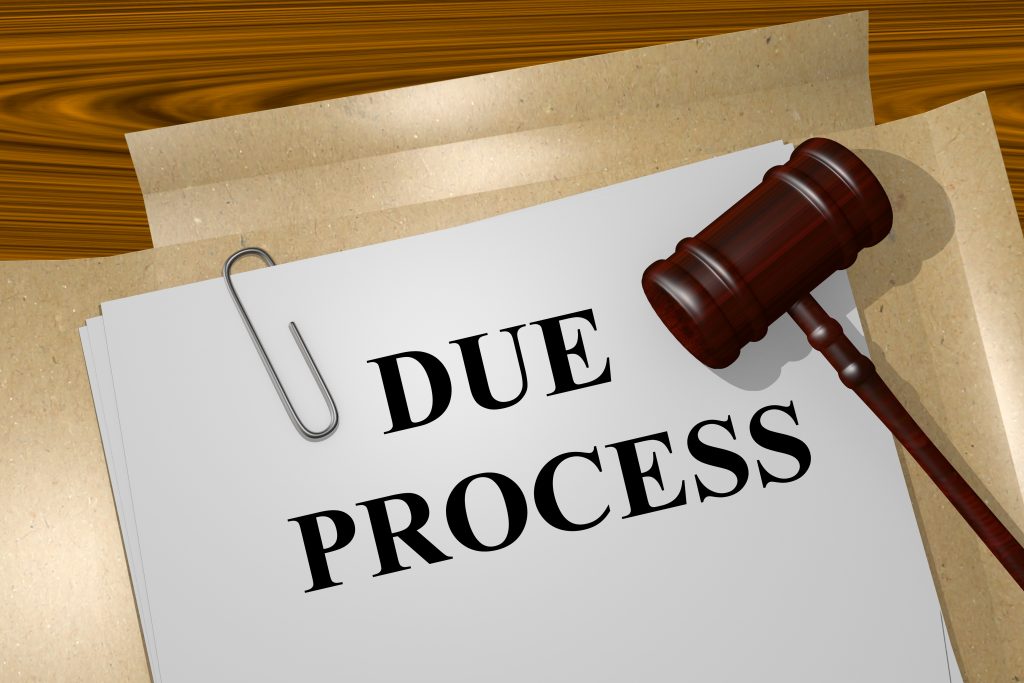 Courts construe, administer, and apply the Federal Rules of Civil Procedure so as “to secure the just, speedy and inexpensive determination of every action and proceeding.” Fed. R. Civ. P. 1. Large patent portfolios have contributed to the increase in numbers of unwieldy cases that assert many patents and claims. A court presiding over such a case usually makes every effort to convince the parties to agree on how to narrow the issues or otherwise manage it efficiently. Realistically, neither side wants the trouble and expense of a lengthy and complicated multi-patent trial. Sometimes, however, the parties refuse to stipulate on a case management strategy, and the judge is left to decide how best to narrow an unmanageable case and issue the necessary orders. But is it fair or even lawful for a district judge to order parties to withdraw claims?

The concern is that foreclosing a patentee from enforcing all its properly asserted patent claims could violate the due process clause. The Constitution provides that “the Congress shall have power…to promote the progress of science and useful arts by securing for limited times to authors and inventors the exclusive right to their respective writings and discoveries.”  U.S. Constitution, Art. 1 § 8, cl. 8. Congress exercises that power through the U.S. Patent Act. Congress determined that a patent gives its owner “the right to exclude others from making, using, offering for sale, or selling the invention throughout the United States.”  35 U.S.C. § 154(a)(1). Further, the act provides that a “patentee shall have remedy by civil action for infringement of his patent.”  35 U.S.C. § 2181. Thus, courts should initially presume that every issued patent claim can be asserted.

The Court of Appeals for the Federal Circuit has been reluctant to interfere with district judges’ decisions about how to manage their own dockets. See, e.g., Keranos, LLC v. Silicon Storage Tech., Inc., 797 F.3d 1025, 1035 (Fed. Cir. 2015) (patent local rules fall within a court’s broad power). In 2011, however, the Federal Circuit squarely addressed how district courts can limit the number of claims a patentee can assert but avoid running afoul of the due process clause. In re Katz Interactive Call Processing Patent Litig., 639 F.3d 1303, 1311-13 (Fed. Cir. 2011). The Katz court held that a district court may limit the number of claims as long as the court provides the patentee with a “safety valve”—the ability to seek leave to assert additional patents by showing good cause. Id. at 1312. Good cause exists when limiting the number of claims would unfairly prejudice the patentee’s opportunity to present its claim. Id. at 1312-13. The court considers whether the patentee needs to assert more claims than the district court’s initial limit allows because specific additional claims present “unique issues of liability or damages” in light of the accused products and proposed defenses. Id.

Since then, a few dozen district courts have applied Katz. Most closely follow its example, ordering the patentee to limit the number of claims but allowing it to show cause why it should be allowed to assert more. See, e.g. Masimo Corp. v. Phillips Elecs. N. Am. Corp., 918 F. Supp. 2d 277, 284 (D. Del. 2013). The Masimo court ordered the patentee to “identify” 30 claims “truly representative”— directed to material issues. But like Katz, the court left open the possibility that the plaintiff could add claims on a showing of good cause. Id. at 286. This claim-limiting approach seems more popular than others, probably because the Federal Circuit approved it—on the specific facts of Katz. These district court cases beg the question: is Katz’s safety valve enough to avoid violating due process? Or is the good cause standard so high in practice that it is a safety valve in name only? Another issue is at what stage in the proceedings to do so. For example, some courts order a patentee to elect a limited number of claims before a Markman hearing. Others allow it to have the benefit of a claim construction before it must decide which of its patent claims to press. For now, decisions on timing seem to be within the district court’s discretion.

The more experimental strategy for managing a patent mega-case is to stage the proceedings by severing the infringement claims and staying proceedings on most of them. The parties then litigate a manageable number of claims until a motion or trial resolves them. After those claims have been adjudicated, the court will consider how to proceed with the stayed claims if necessary. But the hope is that, after the first case, the parties will have enough information about their likelihood of success on the merits of their remaining claims and defenses to reach a settlement.

For example, in a patent mega case now pending in Delaware, Judge Richard Andrews distributed primary responsibility for the patents at issue among the four defendants. TQ Delta v. 2Wire et al; Case No. 13-cv-1835 (D. . April 10, 2017). The court determined to hold 10 trials, with each defendant responsible for several patent families. All other claims against the defendants were stayed. After those 10 trials, the court would consider how to handle the remaining claims, and issues of damages, including FRAND royalty rates and terms for patents found standard-essential, if necessary. The court conducted the first trial in May. The jury found four patents valid and infringed. The experiment continues to unfold.

The Northern District of California’s Judge William Alsup’s “patent shootout” approach has received much attention, but it is effectively just an aggressive variation of sever-and-stay. Judge Alsup’s first shootout was in Comcast Cable Commc’ns. v. Open TV, Inc., 3:16-cv-06180-WHA (N.D. Cal.);  See also Peter S. Menell, Patent Showdown at the N.D. C[ORRA]L, 18:3 Chi-Kent L. Rev. 101, 124 (1919) at 124. The court ordered each party to choose one claim—the patentee, its “silver bullet, which may lead to a preliminary injunction if you win…” and the defendant, the patentee’s “most ridiculous” claim. Transcript of Proceedings at 26-27, Comcast Cable Commc’ns. v. Open TV, Inc., No. 3:16-cv-06180-WHA (N.D. Cal. Mar. 2017) (Document 79). The parties were then to move for summary judgment on just those two claims. The court also warned that if it held that the patentee’s chosen claim was infringed, it would likely issue a permanent injunction. If not, however, it would likely sanction the patentee by awarding the alleged infringer its attorney fees. Id. After a hearing on the motions, the court found for the accused infringer and chastised the patentee. Transcript of Proceedings of Aug. 3, 2017, at 35-36, Comcast Cable Commc’ns. v. Open TV, Inc., No. 3:16-cv-06180-WHA (N.D. Cal. Aug. 4, 2017, Document 184). That case quickly settled.

Pleased with that outcome, Judge Alsup decided to deploy the shootout, or “showdown,” in another massive case. He assured the parties that neither would have to give up claims or defenses. After the showdown, “we’ll eventually get around to all the other claims in the case.”  Transcript of Proceedings of February 22, 2018, Finjan, Inc. v. Juniper Networks, Case No. 3:17-cv-05659-WHA (N.D. Cal. Mar. 7, 2018) (Document No. 44). This time, however, one claim could not be resolved on summary judgment, so the showdown was a jury trial in December 2018. And the parties did not settle. Proceedings on the next patent claim and defenses resumed. The Court scheduled a second showdown trial for October of this year. In August, however, the parties agreed to dismiss all the pending claims and counterclaims with prejudice. All issues previously decided in the first trial or on a dispositive motion are ripe for appeal and the Court entered its final judgment on August 13, 2019.  Finjan, Inc. v. Juniper Networks, Case No. 3:17-cv-05659-WHA (N.D. Cal. Aug. 2, 2019) (Document No. 606).

Federal Circuit May Weigh In

The sever strategy appears to avoid at least some of the due process concerns raised by ordering a patentee to pursue only a limited number of its claims. The patentee keeps the right to assert all its claims against all the products it accuses. It just has no right to enforce them all at the same time. Professor Menell has identified concerns about the showdown approach, however. First, it is not clear that showdowns will result in swifter and less costly litigation. Patent Showdown at the N.D. C[ORRA]L, 18:3 Chi-Kent L. Rev. 101, 124 (1919) at 136. Not all issues are appropriate for summary judgment. Id. And it should be up the parties to decide whether to move for summary judgment or proceed to trial. Id. at 137. A patentee may not have enough information to identify its “silver bullet” claim. Further, one patent claim may not be representative of the strength or weakness of other claims. As to remedy, a non-practicing entity is rarely entitled to an injunction. And courts should only award attorney fees to prevailing parties in exceptional cases. Id. citing Octane Fitness, LLC v. ICON Health & Fitness Inc., 572 U.S. 545 (2014). There’s also the matter of the Seventh Amendment right to a jury trial. Id. at 138. The deadline in Finjan v. Juniper for either party to file a notice of appeal is fast approaching, so the Federal Circuit may well get the chance to consider whether the showdown case management strategy is lawful or whether the Katz strategy is the only proper way to narrow a case when the parties cannot agree on how to do so.

Elizabeth Rader is an independent appellate attorney practicing at Calliope Legal in the Washington DC Metropolitan area. Before entering private practice she started her legal career clerking in the U.S. Court of [...see more]