“One hundred years ago, a craftsman sketched a new design for a hammer and had a blacksmith forge it – using conventional metalworking and materials. Nearly twenty years ago, Mr. Brumfield sketched out the invention-at-issue here…and had it constructed by TT Consultants in the forge of the 21st century.” 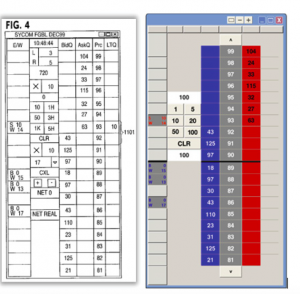 On August 15, Trading Technologies International, Inc. (TT) petitioned the Federal Circuit again for panel rehearing and rehearing en banc of its recent decision that found TT’s Ladder Tool invention to be subject to the USPTO’s Covered Business Method (CBM) review process and abstract under Section 101. TT argues that the PTAB did not follow the precedent of the Supreme Court or Court of Appeals for the Federal Circuit (CAFC) when reviewing its patent claims. The latest brief relates to U.S. Patent No. 7,725,382 (the ‘382 patent), while TT’s request for rehearing filed July 31 related to U.S. Patent No. 7,693,768.

I. TT’s Claimed Ladder Tool Invention Solved Technical Problems and is Indistinguishable from a Mechanical Tool, Making It Clearly Patent-Eligible and Not Subject to CBM Jurisdiction

In section I of the brief, TT argues that the Ladder Tool claimed in the ‘382 patent is just a part of a family of related patents directed to different aspects of its Ladder Tool invention. This family of patents includes the ‘304, ‘132, ‘382, ‘132, ‘411, ‘768, and ‘996 patents, which share the same specifications and claim aspects regarding the structure, makeup, and construction of the tool. According to experts and persons with ordinary skill in the art, the prior art conventional order entry screens were optimal because they met the technical design criteria for order-entry screens, including displaying the most important information at designated locations and conserving screen real estate. This concept for order entry remained the same until the Ladder Tool invention, which has seen growing usage 20 years after its release.

According to TT, the Ladder Tool fixed the technical-accuracy problem with the conventional prior art. In the prior art, the price levels associated with order-entry locations could change unpredictably as soon as the market shifted. Because of this, orders could be sent with incorrect pricing. Traders involved in large volume trading could therefore take a monetary hit from unpredictable mass errors in price. Lead inventor Harris Brumfield designed the invention to address these speed and accuracy problems, while also improving volume and market performance. The invention also provided a novel tool for tracking and cancelling pending orders and was eventually assigned to TT. The Ladder Tool series of patents captures the different inventive aspects of the tool, with the preferred embodiment being a tool constructed of graphical user interface (GUI) structural elements. TT contends that the ‘382 patent does not simply claim a result or computer process, which was previously done manually, because the claimed tool did not even exist before invention, either mechanically or in GUI form. 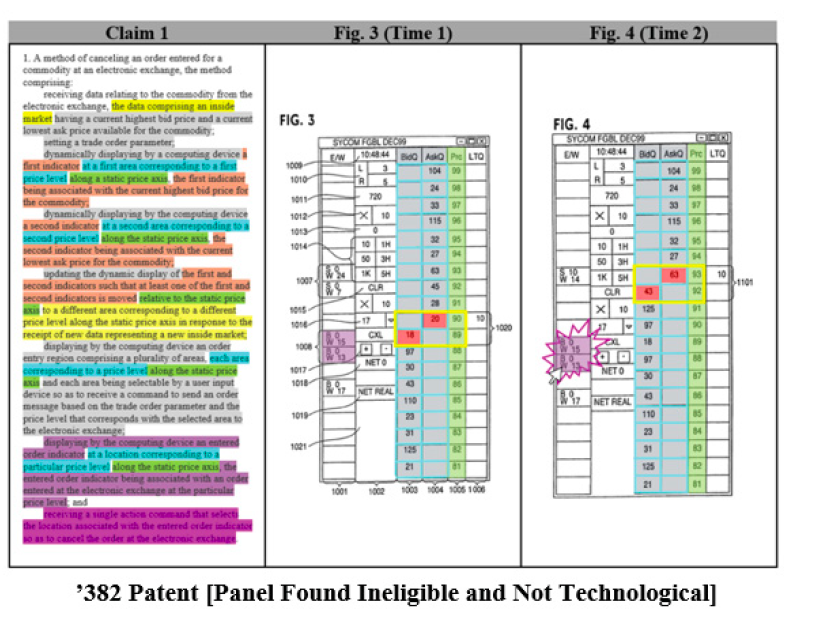 Diving further into the invention, TT explains that the Ladder Tool reduces the value-shifting inaccuracy problem by combining a static price axis with an order entry region, having locations corresponding to price levels along the axis for sending trade orders to the exchange. It also improves usability/efficiency by combining working order indicators with the order-entry GUI, which allows users to work more quickly and efficiently track working orders. Additionally, TT asserts that an added benefit of the tool is improved visualization of market changes. The prior art focused on displaying changing bid/ask prices and quantities, so it was unable to provide a good visualization of the direction of the market. Going against conventional wisdom, the invention solved this problem by adding inside market indicators that would move to reflect market changes. The petitioners thus urge that this invention is not abstract in any way, in that it does not merely arrange data on a screen. TT holds that the claims require a combination of elements to form the tool, no different than an improved hammer or surgical tool, and thus meet the requirements of Section 101. 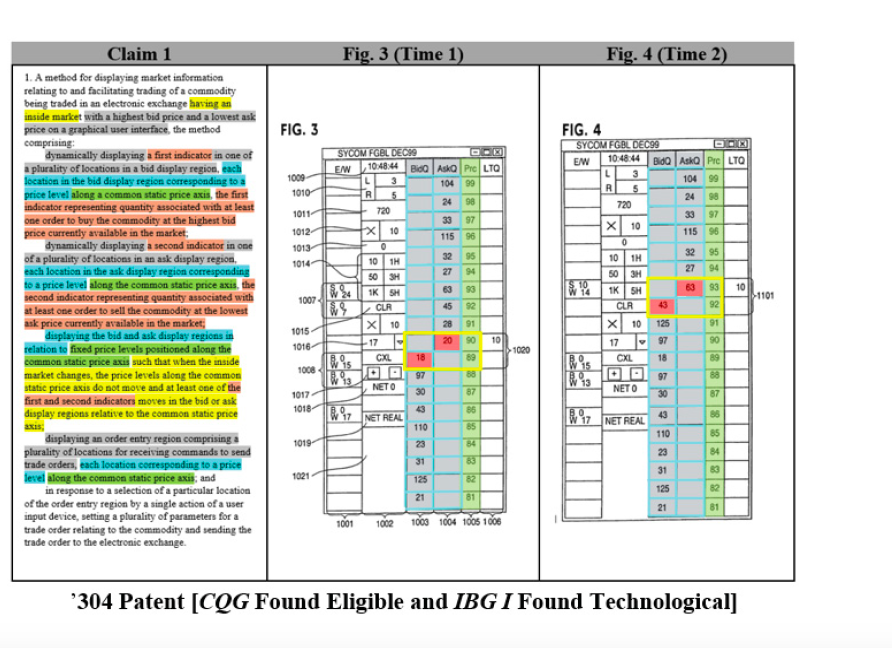 TT further argues that the revolutionary significance of the invention was noted by the Federal Circuit in IBG LLC v. Trading Techs. Int’l, Inc. (IBG I), 757 F. App’x 1004 (Fed. Cir. 2019), involving the ‘132, ‘304, ‘411, and ‘996 patents. They argue that the court declared that there was a large amount of objective indicia of non-obviousness involving the patents. TT contends that this evidence of non-obviousness applies equally to the ‘382/’768 patents, and the advantages of the tool were declared by well-known executives and industry experts far before litigation ensued. They also argue that the patents underwent thorough examination at the USPTO in the “business method” art unit, which is notorious for allowing only 11% of applications. The European Patent Office also allowed comparable claims in a filing for a European Patent. In Trading Techs. Int’l, Inc. v. CQG, Inc., 675 F. App’x 1001, 1006 (Fed. Cir. 2017), the Federal Circuit also found that the similar claims in the ‘132 and ‘304 patents were indistinguishable from claims to a mechanical device and solve speed, accuracy and usability problems of prior GUI devices. However, other Federal Circuit panels recently found four patents to fall under CBM Review and to be ineligible under Section 101. TT argues that the claims in these patents are indistinguishable from the ‘132, ‘304, ‘411’ and ‘996 patents for CBM/ Section101 purposes because they are all directed to the construction of a tool addressing classical technical problems, and therefore IBG IV/V is irreconcilable with IBG I, CQG and Supreme Court precedent.

II. A Test That Focuses on “Improving the Trader” Highlights the Confusion Regarding CBM and Patent Eligibility

Under section II of the brief, TT argues that in IBG IV, the Federal Circuit incorrectly found the ‘768 patent to be subject to CBM jurisdiction and thus ineligible because the claims focus on improving the trader opposed to computer function. TT notes that the Ladder Tool inventions not only improve the user but improve the computer’s functionality by providing classic technical benefits. The computer is transformed into a new tool that did not previously exist with improved efficiency without the sacrifice of accuracy. Therefore, the invention is a concrete technology, not a CBM. The brief adds that rules dismissing inventions that provide user benefits would go against years of precedent, because any invention eventually provides user benefits, whether it be directly or downstream. They also stressed that this confusion is precisely why an en banc rehearing is required to address the confusion surrounding these issues.

Finally, TT cites the Diamond v. Chakrabarty decision, in which the Supreme Court held that man-made inventions are patent eligible where they have markedly different characteristics than any found in nature and have the potential for significant utility. TT argues that the Ladder Tool is a similarly man-made and tangible product, and different from a computer-implemented business method. Therefore, using Alice Corp v. CLS Bank to strike down the patent is inappropriate. The brief concludes:

GUI Tools like TT’s Ladder Tool are a new generation of human creation. One hundred years ago, a craftsman sketched a new design for a hammer and had a blacksmith forge it – using conventional metalworking and materials. Nearly twenty years ago, Mr. Brumfield sketched out the invention-at-issue here…and had it constructed by TT Consultants in the forge of the 21st century—to create a tangible product that saved a company and changed an industry. The claw hammer and the Ladder Tool are anything but abstract. They are patentable tools designed in the mind and built in tangible form.