“Between 2013 and 2017, there was a 1200% increase in filings from China and the fees for a large number of trademarks that have been identified as fraudulent were paid for by only three credit cards.” 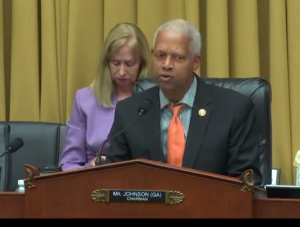 At a hearing of the House Judiciary Committee’s Subcommittee on Courts, Intellectual Property, and the Internet this morning, titled Counterfeits and Cluttering: Emerging Threats to the Integrity of the Trademark System and the Impact on American Consumers and Businesses, members of Congress expressed concern over the steep rise in trademark applications by Chinese filers, many of which have been found to be fraudulent. The problem has been exacerbated by poor enforcement on the part of platforms like Amazon, eBay, and Walmart; by the limited authority of the U.S. Patent and Trademark Office (USPTO) to revoke registrations once issued; and by incentives offered by the Chinese government in the form of subsidies to Chinese applicants for U.S. trademarks, said panelists.

The Scale of the Problem

Mary Boney Denison, Commissioner for Trademarks at the USPTO, was the sole witness on the first panel; she told the Subcommittee members that the USPTO is aggressively tackling the problem of inaccurate trademark filings via examiner training, a new requirement for foreign applicants to use U.S. attorneys, and better technology solutions for identifying fraudulent specimens, among other efforts. Subcommittee members including Representatives Lou Correa (D-CA) and Ted Lieu (D-CA) and Subcommittee Chair Hank Johnson (D-GA) repeatedly asked Boney Denison for recommendations on what additional statutory powers the Office would like to have to help combat the problem. She declined to provide specific suggestions but said the Office has been brainstorming with congressional staff on the topic. 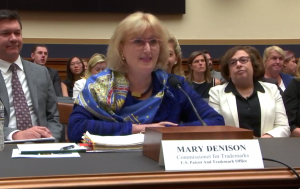 Some witnesses who spoke after Boney Denison suggested that allowing the USPTO to revoke registrations found to be fraudulent after they have been issued would be helpful. Presently, the Office can only stop registration up to the time of issuance; once a registration has been granted the USPTO relies on third parties to challenge registrations via cancellation or opposition proceedings. Jeanne Fromer, Professor of Law, New York University School of Law, explained that the cost of a trademark opposition ranges from $95,000 to $500,000 according to two studies on the topic. “Many small businesses will throw up their hands and give up,” Fromer said. “The USPTO should have authority to take more initiative to audit crowded parts of the register.”

According to Boney Denison, between 2013 and 2017, there was a 1200% increase in filings from China and the fees for a large number of trademarks that have been identified as fraudulent were paid for by only three credit cards. “Did that not set off alarm bells?” asked Representative Martha Roby (R-AL). Boney Denison said it did, and that the Office is taking it seriously. For instance, a Task Force has been formed to identify problems as they come in going forward. 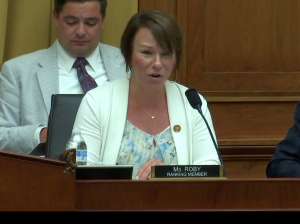 Many witnesses and representatives felt that the platforms on which these fraudulently registered brands are eventually being sold are not doing enough. Roby said that 20 of 47 phone chargers purchased by the Government Accountability Office from third-party sellers on popular e-commerce websites were counterfeit. “Some were so defective they posed a significant risk of catching fire or electrocuting consumers,” Roby said.

Representative Doug Collins (R-GA), rather than questioning Boney Denison, took his time to call out Amazon, eBay and Walmart for not being present.

“I know that Amazon, eBay and Walmart are listening. We cannot hide from this discussion. I need them to be part of these discussions at the table. The way you solve problems is not by avoidance but by actually taking the issues on. We’re trying to make this better for you and the customer.” 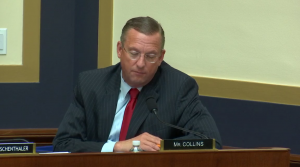 Collins added that during a recent roundtable discussion on brand owners and platforms, he heard that Chinese headquartered e-commerce site Alibaba is doing the most to curb counterfeit products by employing cutting-edge technology to scan for and detect counterfeits and by working closely with brand owners. “I find it shocking that U.S. counterparts are so far behind,” Collins said. Later, Joseph Cammiso, President, Automotive Anti-Counterfeiting Council, Inc., who showed disturbing video of what can happen when consumers mistakenly purchase counterfeit parts, said that most platforms mandate rights holder participation, which requires time and resources. “It’s very cumbersome and I don’t think solutions are scalable to the extent they need to be,” he said.

China is also actively incentivizing Chinese citizens to file for U.S. trademarks via substantial subsidies that have led to the creation of “filing factories,” said Boney Denison. In response to an edict of China’s Central Committee about protecting intellectual property, regional and local governments began subsidizing fees for Chinese filers of U.S. trademarks, which has led to large-scale filings. Boney Denison also said that she has heard that China’s college entrance examination now has IP questions on it, underscoring the importance of IP to the Chinese government. “It’s considered very prestigious in China to say you have a U.S. trademark registration,” Boney Denison said she has heard anecdotally.

The USPTO receives approximately 400,000 trademark applications per year, with about 60,000 of those originating from China. About half of those received a refusal or request for more information, said Boney Denison. In FY17 the Office issued about 20,000 registrations to Chinese applicants and in FY18 about 38,000. “Hopefully, most were legitimate,” Boney Denison said.

While some of the applications coming in are clearly for legitimate businesses, the USPTO has scaled up its efforts to identify which ones contain fraudulent specimens of use via new examination guidance, an instruction to examiners that they must issue a refusal on suspicious applications by default, rather than simply asking for more information first, and working to compile a database of specimens of use, which currently doesn’t exist. 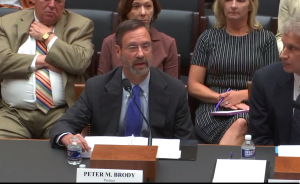 Peter Brody of Ropes & Gray, LLP and the International Trademark Association, who spoke on the second panel, pointed to a failure of the courts to help curb the problems as well. Brody advocated for legislation that would restore the rebuttable presumption of irreparable harm warranting injunctive relief in trademark cases, which has been gradually eroded since eBay v. MercExchange in 2006. “The kinds of harm trademark infringement causes cannot be remedied with damages alone.,” Brody said. He called the courts’ extension of eBay to trademark law “deeply flawed.” “The Patent Act provides for guaranteed monetary remedy in form of a reasonable royalty, and patent infringement does not cause the unquantifiable harm to goodwill or reputation that the Lanham Act is intended to address,” Brody said.

The Subcommittee members asked Boney Denison to provide them with regular updates from the newly formed Task Force that will be monitoring fraudulent filings in order to determine next steps.