Big Tech Under Fire in Congress

“Over the last two hours we listened to something that could have been a hearing in 2005 or maybe almost like a fantasy zone. If we’re to believe what [the tech companies] are saying, we live in a time of incredibly fierce competition…. I think everybody knows that’s not true.” – Timothy Wu 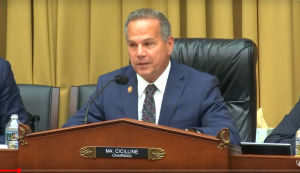 Is Antitrust the Right Approach?

In his opening statement, Cicilline took issue with the 30% commission Apple charges on every developer sale in the first year, and 15% thereafter, pointing to this year’s Supreme Court decision in Apple v. Pepper which held that iPhone owners can sue Apple for monopolizing the retail market for the sale of apps, thereby raising prices for consumers. “A former Apple executive who oversaw app store approvals for seven years has also described Apple as having ‘complete and unprecedented power over their customers’ devices and using this power as a weapon against competitors,’” Cicilline said. 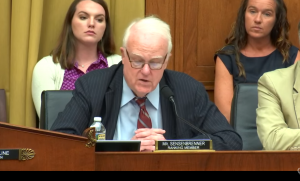 He added that the current environment is reminiscent of United States v. Microsoft, a landmark antitrust case that resulted in a settlement in which Microsoft agreed to loosen up the restrictions it placed on third-party companies uninstalling Microsoft programs or running their own on Microsoft PCs.

Committee Ranking Member Jim Sensenbrenner (R-WI) sought to take a more measured approach than Cicilline in his opening statement. “Just because a business is big doesn’t mean it is bad. Antitrust laws do not exist to punish success, they exist to foster it. There might be genuine issues of anticompetitive conduct but we should not rush to amend the antitrust laws or to break up companies by congressional fiat,” he said.

Addressing Matt Perault, Head of Global Policy Development at Facebook, Sensenbrenner pointed out that “there was a time when Facebook was fledgling, and people thought MySpace was the future” and asked Perault what factors allowed Facebook to prevail. Perault said it was Facebook’s innovativeness, citing features like its policy of requiring real names, the Newsfeed and the Like button. “And we continue to innovate today,” Perault said. “We competed aggressively with MySpace.”

“Did MySpace complain about what you were doing?” asked Sensenbrenner, “No, I don’t believe so,” Perault replied. 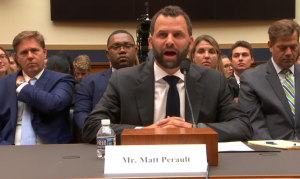 Several representatives questioned Amazon Associate General Counsel, Competition, Nate Sutton, about whether the platform collects data and tracks which products and sellers are doing well in order to create competing, lower priced Amazon-branded products that eventually knock the smaller sellers out. Sutton said Amazon does not use seller data, but also said that such practices have been common in brick and mortar retail stores for decades. “We don’t use individual seller data to directly compete with them. The algorithms are made to predict which products customers want, regardless of brand,” he said.

Cicilline pointed to an example of a seller who had sold headphones on Amazon and was doing well until Amazon created the same product and her product was buried in search results, but Sutton stood firm, even after Cicilline at one point reminded him he was under oath. “Our incentive is to help the seller succeed because we know they’d go elsewhere if not,” Sutton said.

Neguse had strong words for Facebook, beginning his questioning of Perault by asking, “Is Facebook in your view a monopoly?” When Perault replied “No,” Neguse continued:

“I assume the reason [you say that] is because Facebook has a number of competitors. What’s the largest social media network company by active users? I can tell you that it’s Facebook…The third largest is WhatsApp [owned by FB]… The fourth largest is Facebook messenger…The sixth largest is Instagram [owned by Facebook]. So, you can understand the skepticism.”

Jayapal was concerned about Facebook’s practices around buying up smaller competitors. She asked Perault about Facebook’s strategy for identifying promising tech startups and whether the company specifically targets startups that might otherwise be its competitors. “Our strategy is to acquire companies and services that allow us to innovate more effectively,” Perault said, pointing to its acquisition of Oculus as one example. But Jayapal asked about the acquisition of companies like TBH, a teen messaging app that was shelved eight months after Facebook purchased it, and the Fitness app Moves, which was shut down last year. “Acquisitions don’t always work, and we have to make a decision,” Perault said. Jayapal compared these acquisitions to the pharmaceutical industry’s practice of buying up smaller companies and then shutting them down to stave off drug competition. 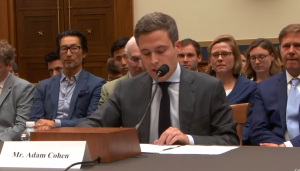 Nor did Google escape criticism; Representative Mary Gay Scanlon (D-PA) told Adam Cohen, Director of Economic Policy at Google, that she has heard concerns about copyright theft on YouTube and asked whether YouTube really has any incentive to combat widespread copyright theft. She said that pirated versions ofYouTube-created content don’t show up in search results, while pirated versions of other shows seem to proliferate. “I’ve not seen any evidence of that discrepancy,” said Cohen, who pointed to Google’s Content ID tool for combating copyright infringing content.

Apple’s Vice President, Corporate Law, Kyle Andeer, might have fared the best of all panelists. While Raskin reiterated Cicilline’s concerns about the App Store’s 30% app commission, citing written comments from Spotify about the “impossible choice” presented by the App Store’s terms, Andeer explained that this applies only to the most successful apps—”84% of apps pay nothing to Apple,” said Andeer. “Spotify is one of our most successful developers and yet they pay commission on less than 1% of their subscribers to Apple.” Later in the hearing, Morgan Reed, Executive Director at The App Association, cited Apple’s App Store as one of the biggest boons to America’s thriving app economy. 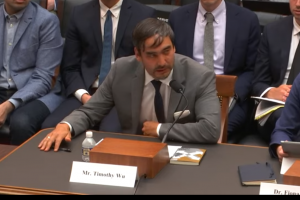 On the panel with Reed were professors, lawyers, and association representatives who weighed in on the tech giants’ testimony and offered tips for approaching the challenges. Timothy Wu, Julius Silver Professor of Law, Columbia Law School, was the most critical of the first panel. He questioned how honest the tech representatives were being and likened their characterization of the current landscape to fantasy:

“Over the last two hours we listened to something that could have been a hearing in 2005 or maybe almost like a fantasy zone. If we’re to believe what they’re saying, we live in a time of incredibly fierce competition—I could go to my garage and start a challenger to Google, Facebook and Amazon, there are no barriers to competition, and competition is only one click away. I think everybody knows that’s not true; there’s no mystery about whether the tech markets have flipped.”

Wu and Fiona Scott Morton, Theodore Nierenberg Professor of Economics at Yale School of Management, advocated for a careful investigation of the tech companies’ practices by the Committee, while many of the remaining panelists cautioned against resorting to antitrust law. Carl Szabo, Vice President and General Counsel, NetChoice, said that the “weaponization” of antitrust law does not benefit consumers. “For Americans, bigger is better,” Szabo said. “Competition is robust and constituents know it.”

Facebook also took a beating earlier in the day yesterday, when the Senate Committee on Banking, Housing and Urban Affairs tore into David Marcus, Head of Calibra, the Facebook subsidiary that is proposing to create a new currency—Libra—by 2020. Senator Martha McSally (R-AZ) summed up the comments of many of her colleagues when, pointing to the company’s various recent missteps and violations, she said, “I don’t trust Facebook…. And now instead of cleaning up your house you’re launching into another business model.”