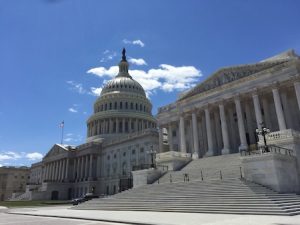 This week on Capitol Hill, the Senate IP Subcommittee will hold its third and final hearing on patent eligibility issues that currently exist in the U.S. patent system. Elsewhere in the Senate, hearings will focus on privacy issues posed by data brokers as well as Federal Communications Commission oversight. Hearings over at the House of Representatives will discuss topics including NASA’s science mission, sexual harassment issues within the scientific professions, and research leading towards increased use of renewable energy sources. The Information Technology and Innovation Foundation will also host an event to explore new tax models affecting U.S.-based Internet services companies.

House Subcommittee on Space and Aeronautics

Discovery on the Frontiers of Space: Exploring NASA’s Science Mission

The National Aeronautics and Space Administration’s (NASA’s) Science Mission Directorate (SMD) is responsible for engaging the United States’ scientific community through various programs which are intended to support NASA’s space exploration activities, including the agency’s goals of sending a manned mission to Mars. In late May the Jet Propulsion Laboratory (JPL), which is building the Mars 2020 rover and will manage its operations for the SMD, announced that it was closing in on installing the Mars 2020 rover’s remote sensing mast instruments, including high-definition cameras. About a week later, the JPL announced that the Mars Helicopter, which will scout study targets for Mars rovers, had passed a number of key flight tests in a simulated Martian environment. The witness panel for this hearing will include Dr. Thomas Zurbuchen, Associate Administrator, SMD, NASA; Dr. Chelle Gentemann, Senior Scientist, Earth and Space Research, and Co-Chair, Committee on Earth Science and Applications from Space, Space Studies Board, National Academies of Sciences, Engineering and Medicine; Dr. David Spergel, Charles Young Professor of Astronomy, Princeton University, and Director, Center for Computational Astrophysics, Flatiron Institute, and Former Chair, Space Studies Board, National Academies of Sciences, Engineering and Medicine; and Dr. Mark Sykes, CEO and Director, Planetary Science Institute.

Data brokers are agencies that collect various data points on consumers, including age, income, gender and consumer preferences, which have come under legislative scrutiny in recent months. California recently passed a state bill requiring data brokers to register with the state’s Attorney General while New York is considering passing a law that would give state residents the right to directly sue data brokers for privacy violations. The witness panel for this hearing will include Dr. Alicia Cackley, Director, Financial Markets and Community Investment, Government Accountability Office; and Pam Dixon, Executive Director, World Privacy Forum.

The multinational presence of Internet services companies have put those companies under an increasing tax liability in those jurisdictions where they create value. In many regions across the world, various countries are actively considering whether to institute “digital services taxes” that would base the taxation of these firms, most of which are American, on those jurisdictions where their users reside, a new taxation model which some have argued is an attempt to collect money from high-profile U.S. companies. This event will feature a discussion with a panel including Barbara Angus, Leader of Global Tax Policy, Ernst & Young; Daniel Bunn, Director of Global Projects, Tax Foundation; and Freddie Wootton, Second Secretary, Economic at Foreign and Commonwealth, British Embassy.

Recent months have seen a growing number of voices on Capitol Hill calling for greater regulation of major Internet companies and advance coverage of this particular hearing indicates that House Antitrust Subcommittee members will focus on the negative impacts that advertising platforms made available by Google and Facebook have had on local news media. While the witness panel hasn’t been officially announced yet, Bloomberg reported that the panel will include Gene Kimmelman, President, Public Knowledge; David Chavern, CEO, News Media Alliance; and Sally Hubbard, Director of Enforcement Strategy, Open Markets Institute.

The State of Patent Eligibility in America: Part III

In mid-May, the National Institutes of Health (NIH) held a meeting to hear stories from women who have reported harassment by advisers or colleagues during the course of projects which have received NIH funding. On June 3, the National Academy of Sciences (NAS) announced an amendment to NAS bylaws which would allow the organization to dismiss members who violate the code of conduct by engaging in harassment. The witness panel for this hearing includes John Neumann, Managing Director, Science, Technology Assessment and Analytics, U.S. Government Accountability Office; Paula Johnson, President, Wellesley College; Dr. Jean Morrison, University Provost and Chief Academic Officer, Boston University; and Dr. Phillip Kass, Vice Provost for Academic Affairs, Professor of Analytic Epidemiology, University of California, Davis.

Oversight of the Federal Communications Commission

In early June, the Federal Communications Commission (FCC) voted in favor of a measure that gives mobile wireless carriers more power to block robocalls being sent to their subscribers. The FCC also recently announced the winning bidders for the agency’s $2.7-billion auction for 28 gigahertz (GHz) and 24 GHz wireless spectrum. The witness panel for this hearing will include Ajit Pai, FCC Chairman, as well as FCC Commissioners Michael O’Rielly, Brendan Carr, Jessica Rosenworcel and Geoffrey Starks.

China’s forays into technological development in the artificial intelligence (AI) sector has threatened U.S. dominance in an area which is increasingly seen as a national security priority. The use of AI to create “deepfakes,” or artificially-created audio or video closely mimicking human speech and movement for spreading misinformation, has been a growing concern among U.S. military and counterintelligence agencies. The witness panel for this hearing hasn’t been announced yet although a press release from the University at Buffalo indicates that David Doermann, Director of UB’s Artificial Intelligence Institute, will appear on the panel.

In early June, California set state records for the most solar power in the state’s electrical grid at one time as well as the most solar power taken off the grid because consumer demand didn’t meet the supply. Advances in energy storage, such as the use of salt caverns to store compressed air energy, could help address situations where the maximum production of renewable energy outpaces consumer demand. The witness panel for this hearing hasn’t been announced yet.