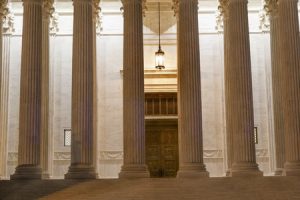 On May 15, SAP America, Inc. filed a respondent’s brief in opposition with the Supreme Court in InvestPic, LLC v. SAP America Inc., a case in which InvestPic’s patent claims covering systems and methods for performing statistical analyses of investment information were invalidated under 35 U.S.C. § 101. Petitioner InvestPic is asking the nation’s highest court to determine whether the “physical realm” test for patent eligibility under Section 101 that the Court of Appeals for the Federal Circuit applied contravenes both the Patent Act and SCOTUS precedent. SAP’s brief contends in response that the mentions of “physical realm” are scant in the case record and that the present case provides a “textbook application” of Supreme Court precedent on claims involving mathematical equations.

InvestPic’s U.S. Patent No. 6349291, Method and System for Analysis, Display and Dissemination of Financial Information Using Resampled Statistical Methods claims a method that involves selecting a sample space, including an investment data sample, generating a distribution function using a re-sampled statistical method and a bias parameter that determines a degree of randomness in a resampling process, and generating a plot of the distribution function. SAP America filed a complaint for declaratory judgment of invalidity of the ‘291 patent in the Northern District of Texas in 2016 and, in 2017, the district court declared the challenged claims invalid under Section 101 on a motion for judgment on the pleadings.

The Federal Circuit’s decision on appeal  was first issued in May 2018, before the opinion was modified that August. In affirming the lower court’s invalidity findings, the CAFC panel of Circuit Judges Alan Lourie, Kathleen O’Malley and Richard Taranto noted that the appellate court may assume that claimed techniques are “groundbreaking, innovative, or even brilliant” yet may still be determined to be patent-ineligible subject matter:

“No matter how much of an advance in the finance field the claims recite, the advance lies entirely in the realm of abstract ideas, with no plausibly alleged innovation in the non-abstract application realm.”

The Federal Circuit’s discussion of the non-physical aspects of InvestPic’s claimed invention mainly take place in the context of discussing other cases decided by the appellate court in which physical aspects of the claimed invention led to determinations that the invention was patent-eligible. In 2016’s McRO Inc. v. Bandai Namco Games America Inc., the challenged claims were directed to the display of lip synchronization and facial expressions of animated characters, which the court determined was physical, unlike InvestPic’s invention, which claimed no improved display mechanism. Likewise, in 2017’s Thales Visionix Inc. v. United States, the claimed improvement was implemented in a physical tracking system. By contrast, the Federal Circuit held that InvestPic’s improvement in the selection and mathematical analysis of information followed by display of the results wasn’t an improvement in the physical realm despite the fact that some claims required databases or processors.

InvestPic’s petition contends that the Federal Circuit’s “physical realm” requirement ignores the primacy of preemption avoidance in Section 101 jurisprudence stemming from Supreme Court case law. In 19th Century cases such as Le Roy v. Tatham (1852) and O’Reilly v. Morse (1853), the Supreme Court struck down patent claims that were overbroad in a way that would preempt future innovation. However, in 1981’s Diamond v. Diehr, the Court upheld claims involving a mathematical equation because only a specific application of the equation was claimed. The Federal Circuit’s “physical realm” requirement is detached from Section 101 preemption jurisprudence, InvestPic argues, despite the fact that preemption concerns are at the center of the Alice patent eligibility test in which the “physical realm” requirement was applied.

InvestPic also contends that the Federal Circuit’s “physical realm” requirement exists in conflict with Congressional allowance of patents on novel processes that are executed by computers. Section 101 of the U.S. patent law allows for the issue of a patent for a “new and useful process” and “process” as defined by 35 U.S.C. § 100(b) includes “a new use of a known process,” such as the ‘291 patent’s use of the known process of resampling in the new application for investment portfolio analysis. Changes to U.S. patent law under the 2011 America Invents Act didn’t amend the definition of “process” in Section 100 and the patent-eligibility of inventions that didn’t exist in the physical realm led to the proliferation of calculator patents in the 1970s and digital patents in the 1990s, the latter period including the “PageRank” algorithm granted to Google.

The application of Section 101 jurisprudence has led to major patent-eligibility concerns in valuable and rapidly growing tech sectors. InvestPic cites to data published in July 2016 by IPWatchdog Founder Gene Quinn, which showed extremely low allowance rates in certain tech sectors post-Alice, including a 1.3 percent allowance rate in Art Unit 3689, which covers financial data processing patent applications. InvestPic also cites an October 2018 guest post on PatentlyO penned by Santa Clara University Law School Professor Colleen Chien which showed that art units affected by Alice saw a rise in office actions that rejected applications on Section 101 grounds, from 25% of all rejections pre-Alice up to 75% after the Alice decision.

The lack of predictability in patent-eligibility matters has led the U.S. Patent and Trademark Office to release revised guidance on Section 101 eligibility this January. InvestPic cites this updated guidance as a result of the “crisis for invention posed by the lower courts’ [Section] 101 morass.” Petitioners also argue that the present case presents an ideal vehicle to restore consistency of the application of Section 101. Unlike the claims in Alice, the invention covered by the ‘291 patent claims is not a trivial coding project and the patent survived Section 102 anticipation and Section 103 obviousness challenges in reexamination proceedings at the USPTO, the Patent Trial and Appeal Board (PTAB), and an appeal of those proceedings to the Federal Circuit, says InvestPic. Further, the ‘291 patent has been cited by more than 50 other issued patents, proving both the narrowness and non-preemptive nature of the patent claims.

In SAP America’s brief, filed May 15, it argues that InvestPic overstates the application of the “physical realm” requirement, as the phrase only appears twice in the Federal Circuit’s decision. A “cursory look at the patent claims” defeats the physical realm argument, as they require physical elements such as databases and processors, which the Federal Circuit held to be generic computing components. SAP also argues that the decision is consistent with 80 years of Supreme Court precedent on the patent-ineligibility of mathematical expressions or formulas in cases such as Mackay Radio & Telegraph Co. v. Radio Corp. of America (1939), Gottschalk v. Benson (1972) and Parker v. Flook (1978).

Because InvestPic’s patent claims elements in the physical realm, SAP argues that the present case isn’t a suitable vehicle for deciding the issue of the Federal Circuit’s test. SAP also cites Federal Circuit decisions following InvestPic in which software patent claims have been upheld as eligible under Section 101, thus contradicting the notion that the appellate court has adopted such a test; these decisions include Ancora Technologies, Inc. v. HTC America, Inc. and Data Engine Technologies LLC v. Google LLC (both 2018).

SAP further pushes back against InvestPic’s contention that an intra-circuit split on the application of Alice exists. InvestPic had cited cases such as DDR Holdings, LLC v. Hotels.com, L.P. (2014) and Ariosa Diagnostics, Inc. v. Sequenom, Inc. (2015) to argue that some Federal Circuit panels held that the absence of preemption conferred patent-eligibility, while others held that preemption was only relevant as a factor. “To be sure, some of these decisions discuss preemption in greater depth,” SAP argues, but none of the cases expressly held what InvestPic contended. While InvestPic’s claims survived Section 102 and Section 103 challenges in other proceedings, SAP notes that Section 101 statutory subject matter is a different matter than Section 102 novelty, noting that the Supreme Court’s decision in Mayo Collaborative Services v. Prometheus Laboratories, Inc. (2012) expressly refused patent-eligibility inquiries outside of Section 101.

Bill Abrams of Foster Pepper PLLC’s Intellectual Property Group and Counsel of Record for InvestPic in its appeal to the Supreme Court, sent the following comments to IPWatchdog:

“InvestPic v. SAP America involves perhaps the most important issue in patent law today—what it means for an idea to be ‘abstract.’ Are software and other computer-implemented inventions ‘abstract’ and, therefore, ineligible for patenting? The answer dramatically impacts patent law and innovation across our modern, digital economy….

“Despite the Supreme Court’s preemption test to determine if an invention is an ineligible abstract idea, the Federal Circuit, in InvestPic and other cases, evaluated the physicality or tangibility of inventive ideas, rather than if the claimed invention would preempt basic fields of technology. This competing understanding of what constitutes an ‘abstract idea’ has resulted in irreconcilable decisions by different Federal Circuit panels. The ensuing uncertainty has made it nearly impossible to predict what inventions are eligible for patent protection. Such uncertainty damages the predictability of the incentive structure that is so central to the United States’ innovation landscape.

“This is why 18 amici, in seven separate briefs, have urged the Supreme Court to grant certiorari and hear this case. The amici recognize the “physical realm” test’s potential to gut patent protection in some of the highest-growth sectors of our economy….

“Continued chaos about the patent-eligibility of non-physical technological advancements imposes devastating costs on innovators and industry. Review and intervention by the Supreme Court would bring much-needed clarity and stability to this vital question of law affecting digital innovations at the heart of our modern economy.”

In the meantime, the coming week should provide an indication of whether or not Congress will get to the matter first.