“Not surprisingly, if the patents were litigated, they were the subject of an IPR proceeding 33% of the time. Sold packages are being asserted and IPRs are the tool for punching back.”

This is part five of a six-part series on Richardson Oliver Insights’  2018 Patent Market Report.

As a buyer, tracking the behaviors of sellers, both in aggregate and individually, allows you to operationalize your buying activities. This is especially true for repeat sellers, who account for 41% of the transactions for patent packages listed in calendar years 2017 and 2018. Knowing who the regular sellers are, often companies with a large portfolio, allows you to contact sellers to create a private deal. Keeping track of a seller’s listings, package sizes, and asking prices can also help you in negotiations because you know their negotiation parameters at the outset.

Similarly, if you are a seller, it is important to get out the word that you are selling. Listing packages on your website, through the IAM Market, or working with brokers attracts buyers to you rather than you having to spend the time and effort to find them.

For the analysis of current sellers and buyers we looked at all of the packages that sold between January 1, 2017 and May 31, 2018 (assignments were last checked on August 15, 2018) regardless of their listing date. Sales continue to be made mostly by operating companies, which is not surprising as they file the majority of patents. Operating companies were the sellers in 67% of transactions. This is remarkably consistent, at 66% in the previous two papers.

If you are an operating company and you are buying to mitigate risk, there is one other thing to consider when tracking company behavior. How can I mitigate the risk of these patents without purchasing them? For other operating companies, solutions such as the LOT Network, license on transfer network and cross-licensing solutions. But unlike last year, when there were no Non-practicing entities (NPEs) on the repeat sellers list, there are two this year. NPEs tend to sell to smaller NPEs. Operating companies should take note of this and decide how best to mitigate future NPE risk.

Buyers are the natural counterparts to sellers. Just as buyers should track sellers, sellers benefit from tracking buyers. Additionally, buyers who track buyers can gain a competitive advantage by knowing what other operating companies of concern (including competitors) are actively buying in the market.

Like last year, the percentage of packages purchased by NPEs has increased and they have retaken the title of largest buyers at 42% of packages, up from 36% last year. Defensive aggregator purchases seem to have followed and increased their buying share to 19%, up from 13% (see Figure 16). Operating companies, on the other hand, have decreased their buying and now make up only 37% of the purchases, down from 47% last year. 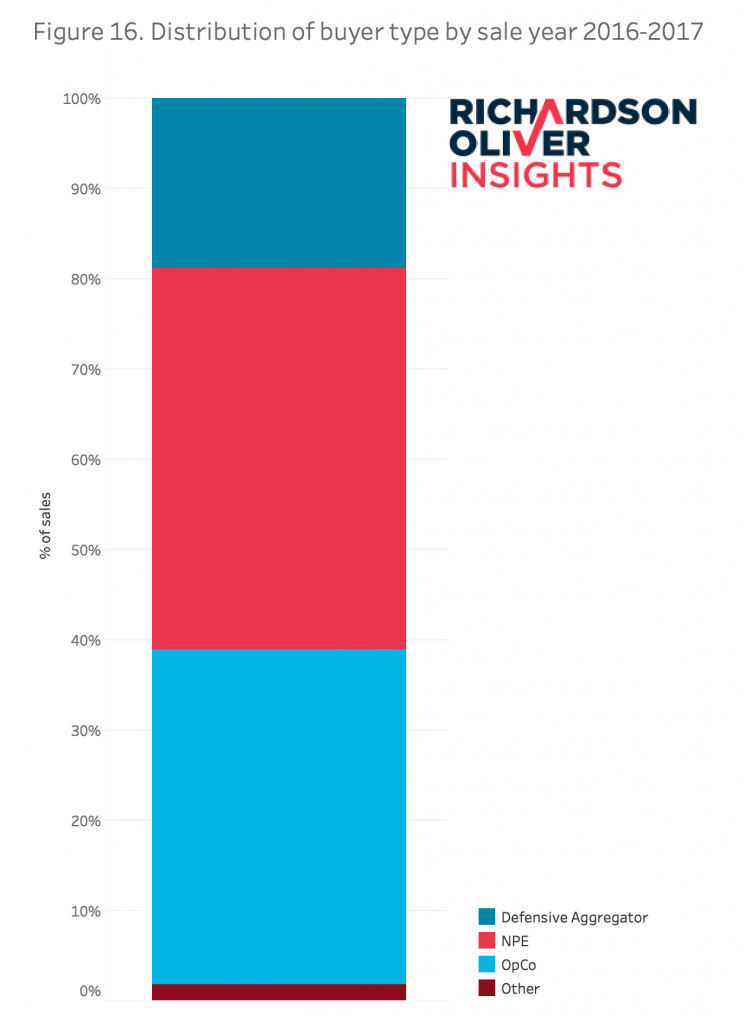 Even though NPE buying activity increased, Intellectual Ventures’ (IV’s)buying dropped to two packages. This likely completes its buying wind down as the number of packages it has purchased on the brokered market has decreased from 40 to 13 to 6 in the previous three years, and IV has announced that it has stopped its buying programs. It is noteworthy that NPE purchases increased despite IV terminating its buying program. 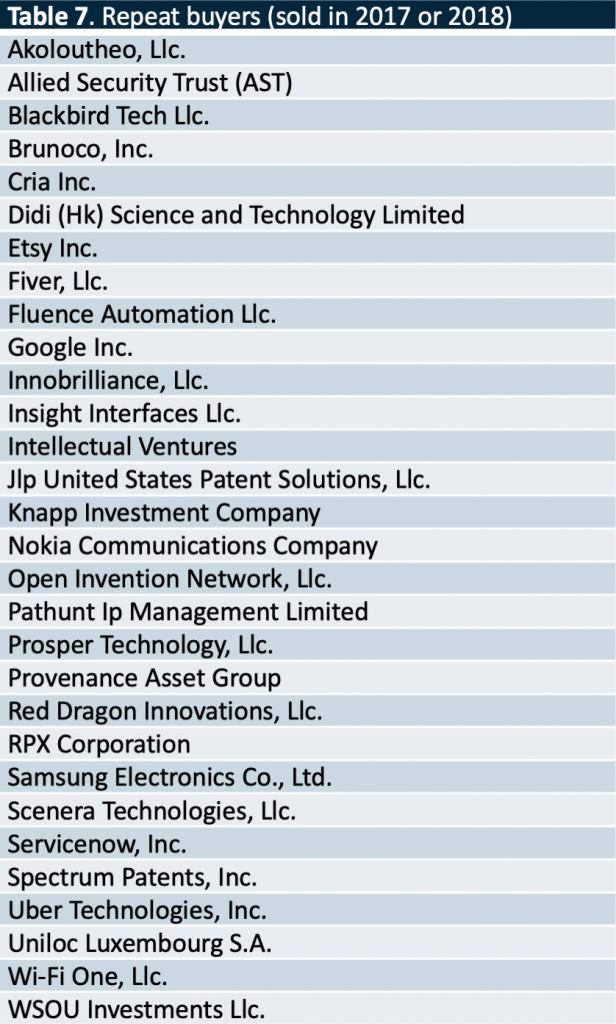 Provenance Asset Group, Uniloc Luxembourg S.A., and Uber Technologies, Inc., purchased 18% of the deals. Defensive aggregators Allied Security Trust and RPX Corporation slowed their open market buying, though each purchased 4% of the packages. Like the rest of our analysis, these numbers include only the brokered patent market and do not include private purchases.

For operating companies, the brokered patent market represents a large pool of litigation risk. Purchased patents do not sit unused. Of the packages that sold, 16.3% had at least one U.S. patent litigated after the listing date. While some of the increase from last year’s 14.3% rate can be attributed to more time having passed for older packages, it appears that the litigation rate of brokered market sales keeps going up. Additionally, 91% of the sold packages that were litigated after the listing date were litigated by an NPE and the average number of NPE-filed litigations for these packages was 11.4 lawsuits. It is important to note that we only have visibility into filed cases and that the numbers do not include private assertions and licensing deals that were settled before litigation was filed. Overall, NPE litigation campaigns regularly use patents bought off the brokered market.

Rates of inter partes reviews (IPRs) for sold packages have similarly increased. Sold packages were six times more likely to be IPRed after listing than unsold packages. Not surprisingly, if the patents were litigated, they were the subject of an IPR proceeding 33% of the time. Sold packages are being asserted and IPRs are the tool for punching back.

This year, in order to analyze international litigations, we worked with Darts-IP. They helped us to search over 14,000 international assets from this brokered patent market dataset and found that only 15 patents were litigated across 16 litigations. These litigations were spread out across six jurisdictions: Canada, China, Germany, Spain, Japan, and at the EPO. Reasons for the much lower litigation rates relative to the United States include: far fewer international patents are transacted, individual market size and impacted revenue are lower, and loser-pays rules impart greater caution in bringing a suit. As China’s patent system continues to mature, and if the EU moves to a unitary patent, litigation trends may change rapidly.

For those interested in changing the balance of negotiations, the international assets make a greater difference today than they did five years ago. However, with relatively low litigation rates, it is still too early to make a call on what will happen with these assets.