“In 2018, the price for single-asset packages dropped by 56% and came more in line with the pricing for other package sizes.”

This is part three of a six-part series on our 2018 Patent Market Report.

In any market, pricing is where the rubber meets the road. As a buyer, you will not be taken seriously if you significantly underbid, yet you want to get a fair price. Conversely, if you are a seller who will not negotiate near the market price, it will be almost impossible to close a deal. We understand that patents are definitionally unique, have varying relative strengths and market applicability, and also that the demand for patents varies by technology area and many other factors. But when it comes down to it, you have to have a place to start. This is where average pricing statistics become useful. And to every seller who says: “My patents aren’t average, so average pricing should not apply to me,” we respond by saying: “We’ll accept that as true, you just have to show us why.” In the vast majority of cases, starting with the average price and moving up or down from there is an effective way to set a price for buyers and sellers.

We believe that the availability of pricing data creates liquidity in the market and the more visibility there is into pricing, the easier it is for both new and established participants to participate in the market. The average asking price is a guide, not an absolute rule. We have helped clients buy patents priced at around $1 million per asset, which is well above the average market price, and have also negotiated deals for a small fraction of market price. In both of these cases, we think the prices were justified, and importantly, the deviation from the average was supported by business models, market data, and other factors that were specific to that deal. 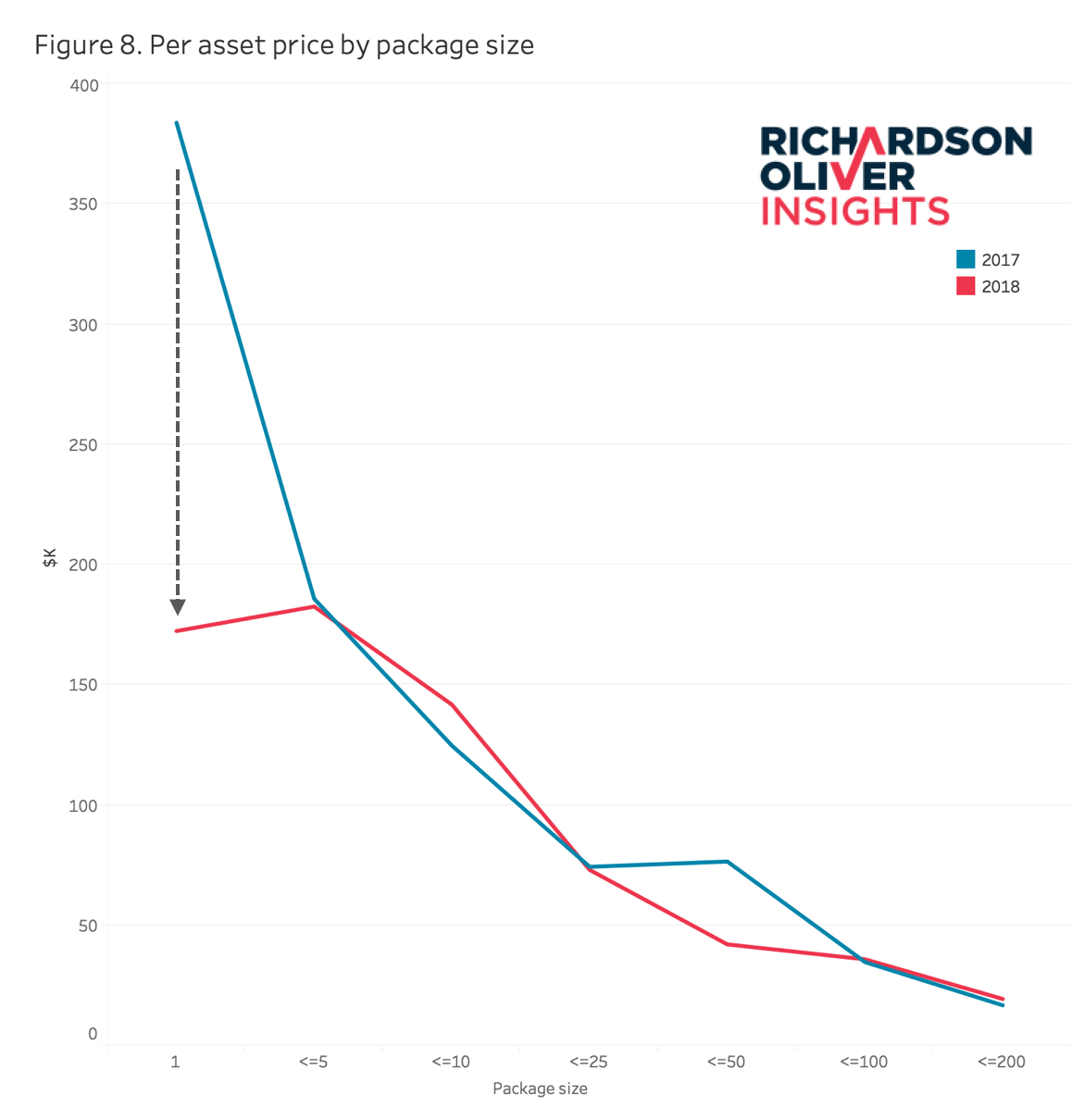 Additionally, among the single-asset packages listed in 2018 that have already sold, a small dataset, have an average asking price of $272,000 versus $129,000 for unsold, a price difference of $142,000 per asset. In 2017, that price difference was only $56,000. It appears that buyers are still willing to pay a premium for some single-asset packages, and sellers dropped the price on others where they could not reasonably support the premium.

Our takeaway from this pricing data is that the premium for single-asset packages seen in all of the previous market years has reduced rapidly. This may have happened now because of the increased interest in international counterparts, which single-asset packages do not have. This price drop also caused standard deviations in the asking price per asset to drop by 24% (to $107, 200) for per asset asking prices and 23% (to $143,100) for per U.S.-issued assets, thereby further normalizing pricing data.

Figure 9 shows the distribution of asking prices. The data shows a continued focus on packages priced between $250,000 and $2 million; 60% of packages fall into this range, down from 69% last year. Here, brokers are able to be profitable, as packages are sufficiently expensive for them to make a significant commission while still keeping purchases within buyers’ budgets. But we also see a large increase in the sub-$250,000 listings, which corresponds to the drop in single-asset package prices that now fall into this price range. 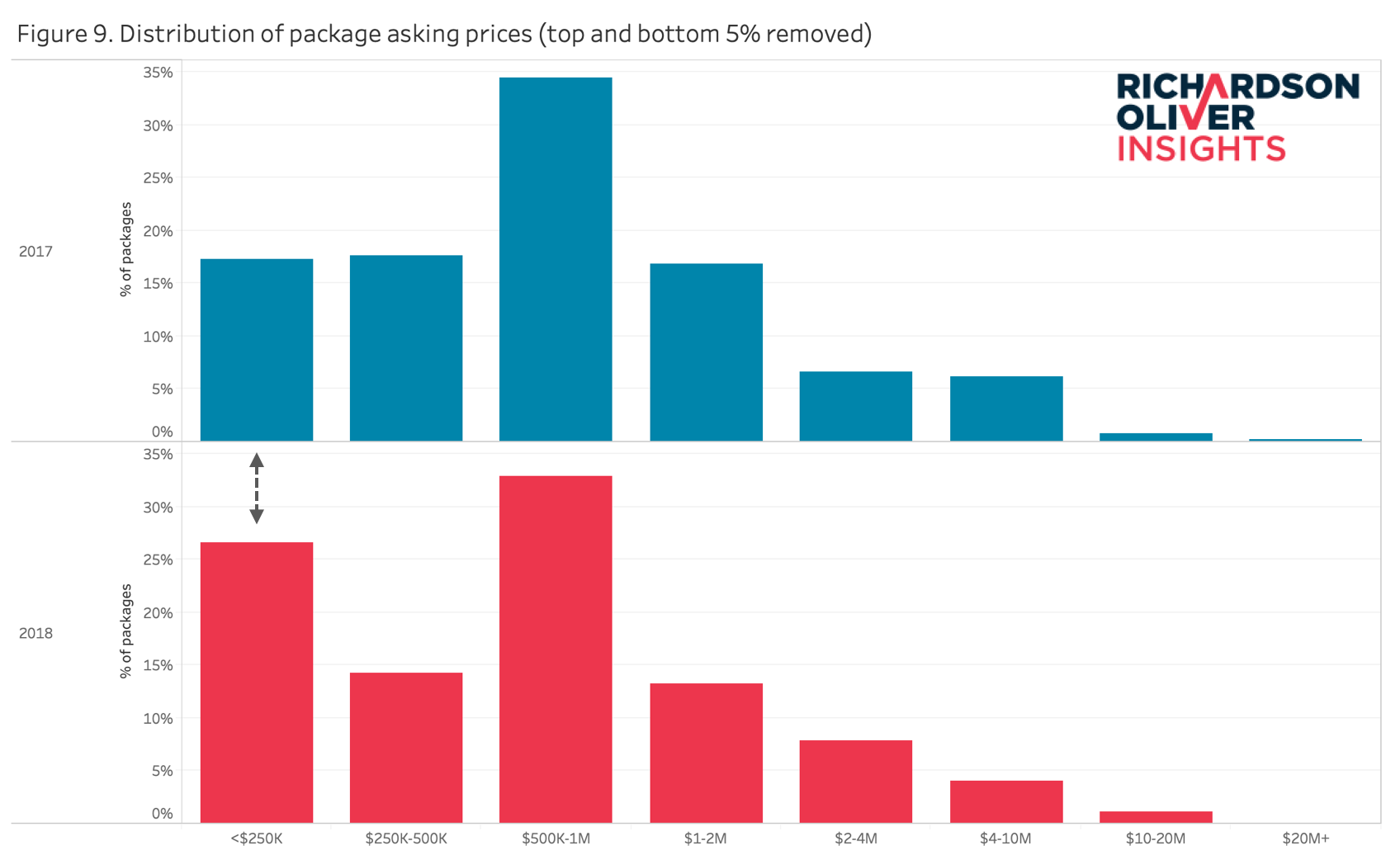 We also continue to track the sub-$250,000 price range separately; we began doing this three years ago. This price range is interesting in that it represents low margins for the brokers. Assuming a 25% commission for brokers, a maximum $62,500 commission is possible for these packages. Additionally, when one takes into account the overall low sales rate of packages (more on this below), the margins look thin, thus causing brokers to find ways to lower their costs.

Evidence of Use materials (EOUs) were delivered for only 13% of packages priced at or below $250,000, in contrast with 61% of packages priced above $250,000. In the 2017 market, those numbers were 44% versus 50%, respectively. Brokers are spending much less on the marketing of these lower-priced packages than in the past. In buying these types of packages, we advise clients to scale down the resources used in diligence and negotiating the patent purchase agreement, unless the buyer has significant plans for the patents. See below for further discussion of EOUs.

We analyzed the interaction between pricing guidance and the number of assets in a package (see Figure 8). On average, asking price per asset drops considerably as the size of the package increases; from $172,000 all the way down to under $19,000. This is consistent with last year’s data, although the fall-off is far less without the single-asset premium. Last year, the smallest packages were asking $384,000 and the largest packages $17,000 per asset.

If you are a seller, in most cases it makes sense to take the time to find and highlight key patents and to group those into smaller packages in order to increase the overall price per asset (Figure 8). But this can be time consuming if you have a very large portfolio and breaking up a group of patents into smaller packages may leave a pile of unrelated, undifferentiated and, ultimately, unsellable assets. In these specific cases, bulk packages may provide a better selling opportunity. This calculation continues to be difficult and benefits from up-to-date knowledge of the market and in-depth knowledge of the specific portfolio. If you are a buyer and presented with a bulk package, do not assume that you have to accept the package as is. It is likely that the seller will allow you to “cherry pick” assets out of the bulk lot. But in that case, the price for these differentiated assets may go up. When approached by a buyer looking to purchase one family from a large lot, we have seen sellers say that they have a minimum package price to make a deal worthwhile. In these cases, the parties often add assets to the deal in order to make the price per asset palatable to both sides.

Technology categories continue to drive asking price variations, but less so than in the past. We are starting to see technology areas fall into the category of “selling or not selling” rather than price adjusting. When it comes to top asking prices, software has regained its throne as the top pricing area and “other” has dropped from the top price down below hardware (see Figure 10). But overall, there is less price variation between hardware, software and “other” technologies than in previous years. Notably communication packages have fallen farther behind that pack. The lowest priced tech category was imaging, demanding only 39% of the average asking price. Financial patents had the highest asking price at 170% of the average. Surprised? Us too. Last year, the automotive category demanded 365% of the asking price per asset, so, as with other factors, price variation is decreasing across technology categories.

Asking Price and Impact of EOU

As discussed above, there are ways a seller can show that their package should fetch a higher price than average. EOUs are a great way to do that. Overall, the percentage of deals with EOU was consistent, with 42% in 2018 versus 43% last year. And we observed a 43% price premium over the average for packages with a seller-supplied EOU. This is the largest premium we have seen. We also know that sales rates are much higher for deals with EOU (see below) so the value of writing an EOU is compounded. We did not see a premium for EOU packages last year, but we did all other years, so we believe 2017 to be an anomaly.