This Week on Capitol Hill: 5G, National Security and IP; Oversight of the FCC; and Renewable Energy Technology Development 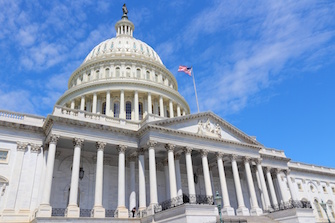 There will be debate on Capitol Hill this week around tech and innovation, as hearings get underway on Tuesday in the U.S. Senate on 5G networking issues related to national security and intellectual property, commercial space challenges, and the development of advanced rare earth element extraction technologies. On Wednesday, things heat up at the U.S. House of Representatives with Federal Communications Commission oversight, as well as wind and solar innovation efforts. The week closes on Thursday with hearings in both houses of Congress on weather forecasting innovation and technology. Elsewhere in Washington, DC, the Information Technology and Innovation Foundation kicks the week off on Monday by looking at efforts to reduce greenhouse gas emissions through innovation. On Wednesday, the Brookings Institution holds its inaugural conference looking at the intersection between technology and terrorism.

Innovation in clean industrial processes is critical for both addressing the concerns of climate change and promoting American productivity and competitiveness. The industrial sector, which includes cement, steel and petrochemical companies, accounts for 30% of U.S. greenhouse gas emissions and represents some of the most difficult industries to decarbonize, but few federal programs have been established to reduce emissions from this sector. Speakers at this event will include Ryan Fitzpatrick, Deputy Director of the Clean Energy Program, Third Way; and Doug Vine, Senior Energy Fellow, Center for Climate Energy Solutions. The event will be moderated by Colin Cunliff, Senior Policy Analyst, Information Technology and Innovation Foundation.

Senate Committee on the Judiciary

Fifth generation, or 5G, networks offer massive device connectivity and incredible data download speeds. However, Huawei, one of the world’s leading developer of 5G technologies, has been declared a national security risk by government officials in multiple countries because of its close ties to the Chinese government. Of further concern is the fact that Chinese companies have taken the world’s lead in terms of earning standard-essential patents (SEPs) related to 5G networking. The witness panel for this hearing hasn’t been announced yet.

Senate Subcommittee on Aviation and Space

Global Research Network on Terrorism and Technology: The Inaugural Conference

Social media, smartphones and other technologies have made our world more connected than ever before and many jihadists and extremist groups have learned how to leverage these technologies in order to further their objectives. This all-day conference will include four research panels on topics such as online pathways, capabilities and regulation, as well as a policy panel on the future of tech and terrorism.

The full Senate Commerce Committee will meet to discuss six proposed pieces of legislation including S. 384, the Composite Standards Act, which would direct the National Institute of Standards and Technology to facilitate the adoption of composite technology in infrastructure; and S. 1289, the Measuring the Economic Impact of Broadband Act, which would assess and analyze broadband Internet deployment across the U.S. and its economic impact.

House Subcommittee on Communications and Technology

Accountability and Oversight of the Federal Communications Commission

In mid-April, the Trump Administration announced that the Federal Communications Commission (FCC) would hold another spectrum auction this December in support of 5G network development; President Trump also pledged $20 billion to improve broadband Internet access throughout rural America. In early May, the FCC denied an application for providing international phone services into the U.S. from China Mobile USA based on security risks posed by the Chinese government which owns the entity, according to the FCC. The witness panel for this hearing hasn’t been announced yet.

Advancing the Next Generation of Solar and Wind Energy Technologies

The full House Homeland Security Committee will meet to markup 10 legislative drafts including H.R. 542, the Supporting Research and Development for First Responders Act. If passed, this bill would establish a National Urban Security Technology Laboratory that would evaluate emerging technologies for first responders, cybersecurity for those technologies and radiological and nuclear response and recovery technologies. Several other bills to be marked up at this meeting involve cybersecurity measures.

Reauthorization of the SBA’s Innovation Programs

At 2:30 PM on Wednesday in 428A Russell Senate Office Building.

China has long been known as a country where the Communist government works to prevent its citizens from accessing information on the Internet which might be seen as too Western or which might offer opportunities for dissent. Reports indicate that the Chinese government has monitored the technology use of various groups, including ethnic Uyghurs, and have arrested people for making contact with foreign numbers or social media accounts. The witness panel for this hearing hasn’t been announced yet.

This hearing will explore both the current state of atmospheric and forecast research as well as ways that atmospheric science research could be made more publicly available. There will also be feedback presented on the impact of a couple of bills including the Weather Research and Forecasting Innovation Act of 2017. The witness panel for this hearing will include Dr. Waleed Abdalati, Director, Cooperative Institute for Research in Environmental Sciences; Dr. Deborah Bronk, President and CEO, Bigelow Laboratory for Ocean Sciences; Dr. Radley Horton, Associate Research Professor, Lamont-Doherty Earth Observatory, Columbia University Earth Institute; and Dr. Erika Washburn, Director, Lake Superior National Estuarine Research Reserve.

The Future of Forecasting: Building a Stronger U.S. Weather Enterprise

The 2020 fiscal year budget request for the National Oceanic and Atmospheric Administration (NOAA) includes $15 million for the creation of the Earth Prediction Innovation Center, a weather modeling research center which is intended to restore American leadership in numerical weather prediction. At the same time, weather scientists have cautioned that the advent of 5G networks, which rely on radio frequencies also used by forecasters, could negatively impact the ability to predict major storms. The witness panel for this hearing includes the Honorable Neil Jacobs, Assistant Secretary of Commerce for Environmental Observation and Prediction, performing the duties of Under Secretary of Commerce for Oceans and Atmosphere, NOAA; Dr. Louis Uccellini, Assistant Administrator for Weather Services and Director of the National Weather Service, NOAA; Dr. Shuyi Chen, Professor, Department of Atmospheric Sciences, University of Washington; Dr. Christopher Fiebrich, Associate Director and Executive Director of the Oklahoma Climatological Survey; and Rich Sorkin, CEO, Jupiter Intelligence.