This is the fifth in a 13-part series of articles authored by Kilpatrick Townsend that IPWatchdog will be publishing over the coming weeks. The series will examine industry-specific patent trends across 12 key patent-intensive industries.

Yesterday, we discussed patenting trends in Computational Biology and Bioinformatics. Today, we turn to the automotive industry, which is a large part of the U.S. domestic economy.

To quickly summarize this series:

It has been a wild decade for the automotive industry, with U.S. auto brands almost dying in the Great Recession. Federal government intervention rescued brands and attempted to turn them toward efficiency instead of profitable large SUVs. Although there has been a steep increase in patent filings in the automotive space, U.S. companies have a smaller proportion of them, indicating global forces are a major threat. This is especially acute in the area of electric propulsion, where our early patent lead has plateaued. Many of the car brands and battery innovators have been sold to Chinese interests who are moving quickly with government support to dominate the car industry, at least for electric vehicles (EVs). 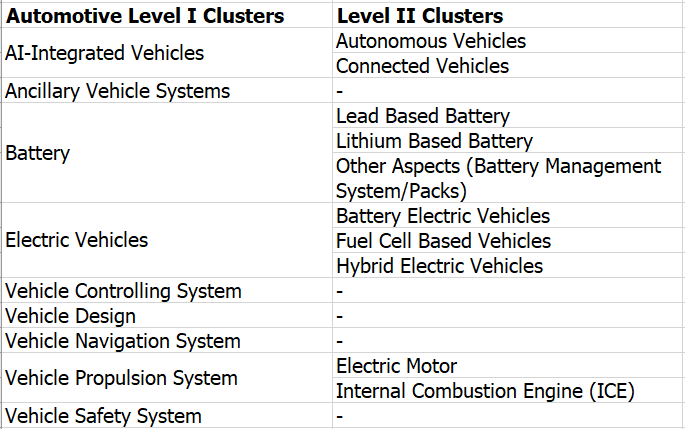 Automotive patent filings for the industry overall have steadily increased after a brief inflection in 2009 corresponding to the Great Recession, as shown in Figure 1. This is a common trend in most of the areas we studied. As availability of capital evaporated, the overhead associated with a patent program was an easy victim. The hiatus was temporary, with a doubling of filings since. 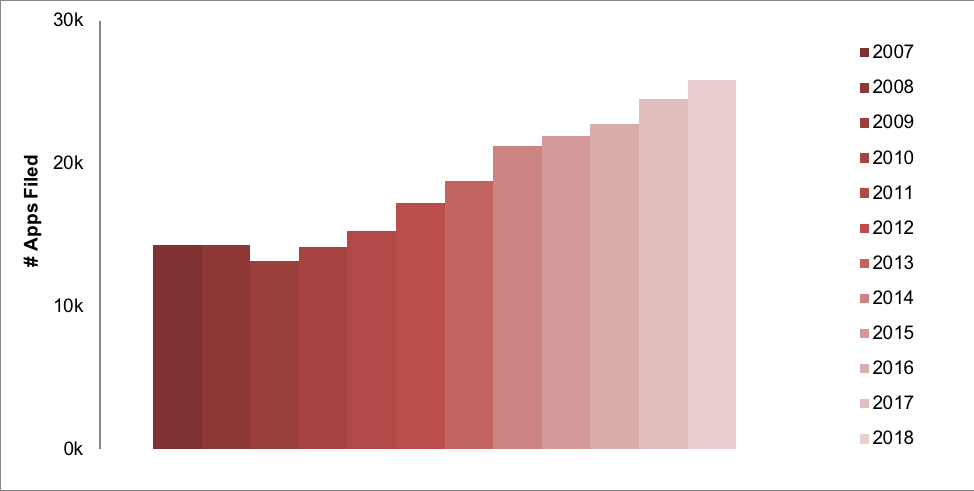 Despite the general upward trend in filings, different clusters experienced trends, as broken out in Figure 2A. The most growth was seen by Vehicle Controlling Systems, Ancillary Vehicle Systems, AI-Integrated Vehicles, and Vehicle Navigation Systems. Propulsion Battery had strong growth before actually decreasing in 2014 in a trend that continues today—perhaps corresponding to the movement of battery manufacture overseas. Several areas found early growth and then plateaued around 2014, such as EVs, Vehicle Propulsion Systems, and Vehicle Safety Systems, just as gas prices fell off. 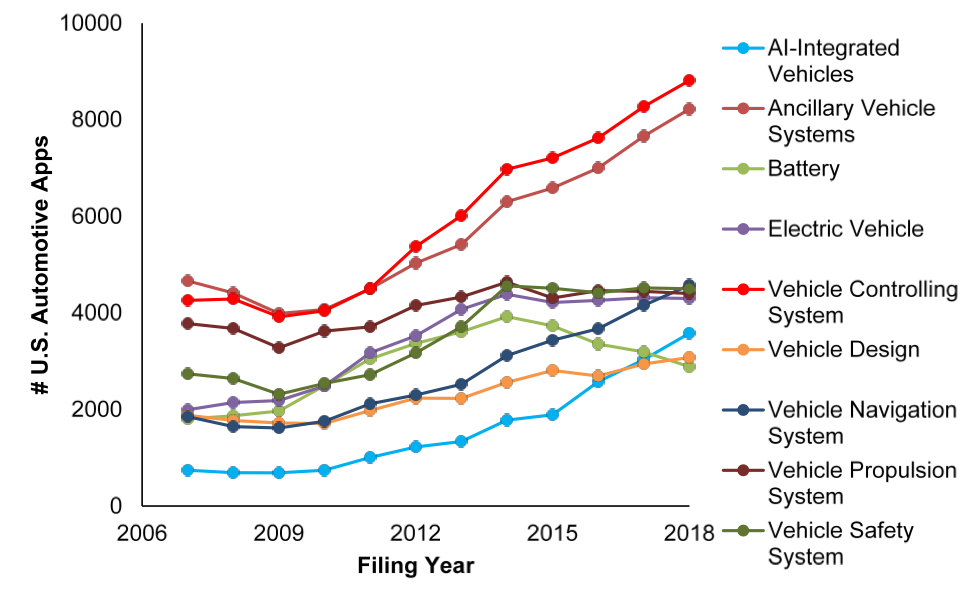 In Figure 2B, we charted internal combustion engine (ICE) against electric motors common in EVs and hybrids. Electric motor innovation has a steady upward trend, while ICE peaked in 2014 and is falling away even with decreasing fuel prices. 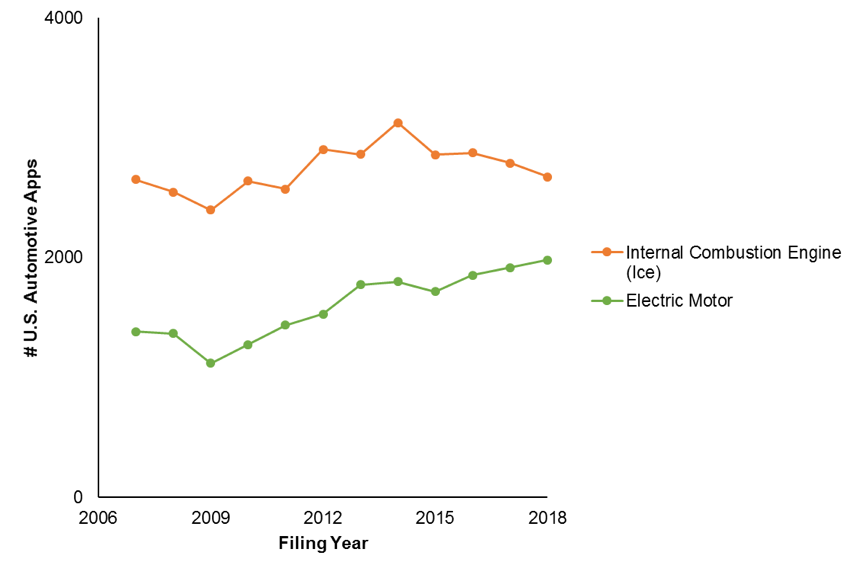 Globalization is pushing down the contribution to patent filings for U.S. companies. Automotive was the sector that saw the lowest domestic contribution to U.S. patent filings. We see the proportion of U.S. filing going down since 2014, with Japan and China filling in that gap in Figure 3. With far more electric pure-play brands in China producing cars in volume than the lone brand we have domestically, the shift to China for EV innovation is expected to continue. 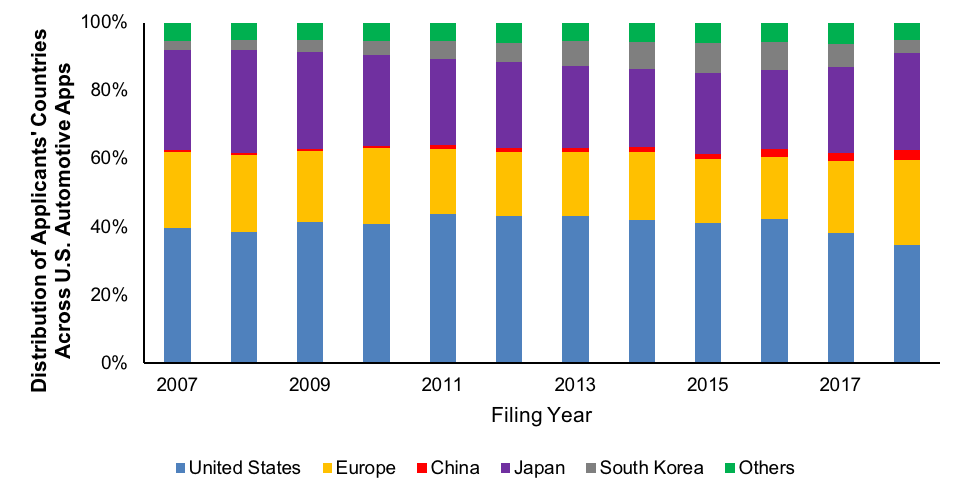 Automotive patent filings in the United States show a healthy upward trend. With the transition to technology-heavy autos, those segments are driving the increases. The innovation age of ICE propulsion may finally be ending after over a century of improvements that produced extremely complex and reliable offerings. Electric propulsion seems here to stay after a century of ICE dominance. Cars are becoming more like our cell phones, with constant technology upgrades and software improvements that may end the need for human drivers altogether. We hope that the automobile sector can get ahead of these trends to increase their domestic dominance with more aggressive innovation and patenting strategies.