This is the second in a 13-part series of articles authored by Kilpatrick Townsend that IPWatchdog will be publishing over the coming weeks. The series will examine industry-specific patent trends across 12 key patent-intensive industries.

In yesterday’s article, we introduced our patent-trends study (performed in a collaboration between Kilpatrick Townsend and GreyB Services) and provided high-level data across industries. To quickly summarize:

Today’s article pertains to the Internet of Things (IoT) industry. With the prevalence of WiFi, cellular modems and devices configured for short-range connections, IoT systems are becoming all the more ubiquitous and exciting. No matter how powerful and sophisticated a single device is, its efficiency and usefulness will very often remain capped if it cannot “talk” to other devices. Only through these communications can the device gain a more comprehensive view (e.g., corresponding to where users are, what computations or controls may be helpful, what computations or actions other devices are already performing or coordinating). Thus, we can begin to start thinking about specifications (e.g., efficiency, speed, memory, accuracy) of a device and instead think about specifications of a system. This presents a large number of important use cases.

As reported in our initial patent trends article, filings for the industry overall have dramatically increased over the studied time period: from approximately 5,100 filings in 2007 to approximately 18,100 filings in 2018. Figures 1A and 1B show the filing trends broken down by Level-I Clusters (Figures 1A) and by specific use areas (Figure 1B). 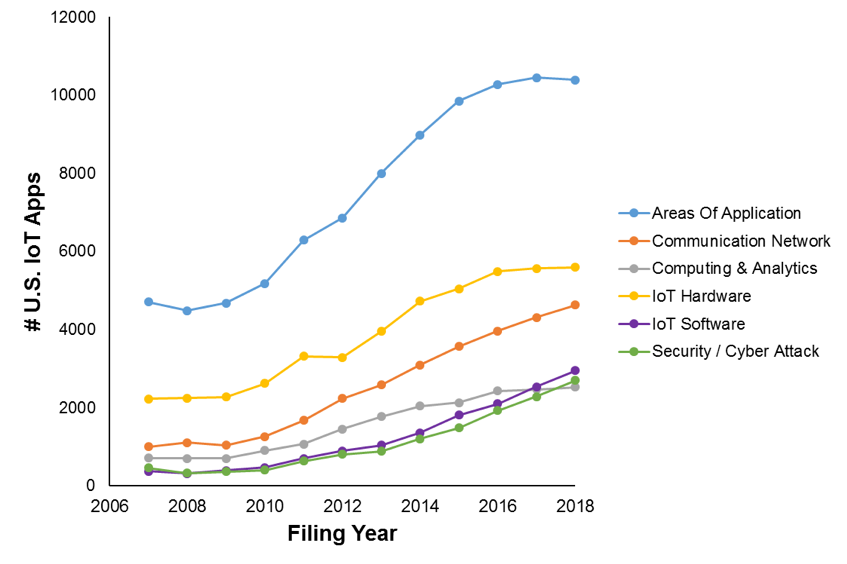 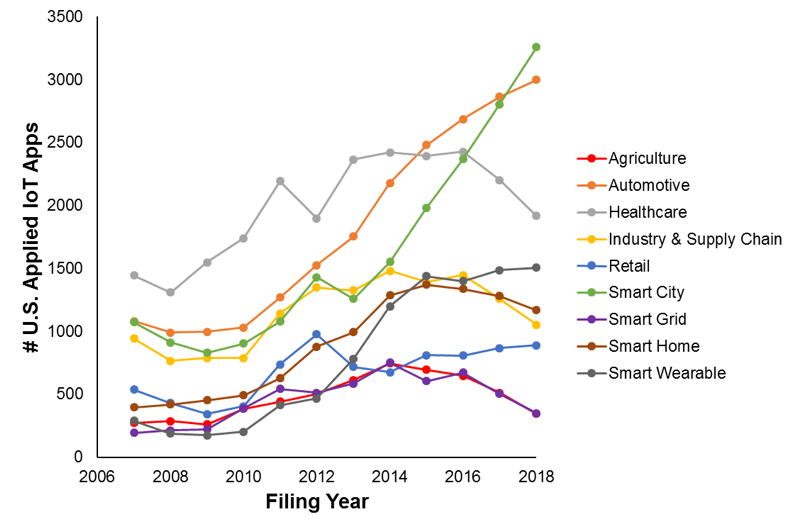 Trends across application areas are less consistent. Only three of nine application areas showed solid and rather consistent filing increases throughout the time period: the automotive, smart-wearable and smart city industries. For another five application areas (agriculture, healthcare, industry & supply chain, smart grid, and smart home), filings were increasing until about 2014-2016, after which they began to decrease.

One potential explanation for the filing drop-off is that the Alice decision (issued in 2014) caused allowance rates to drop in art units pertaining to these industries, which caused applicants to file less. However, for four of five of these areas, 10% or less of the applications were in business-method art units (which were the prominent art units immediately affected by the decision). With regard to the fifth application area (industry & supply chain), 30% of the applications were in a business-method art unit.

Figure 2 shows, for each of the applied-IoT areas, the fraction of the applications that were filed in 2013 and are now patented. The two areas associated with the top two patenting percentages are the automotive area and the smart city areas. These are two of the three areas for which filings steadily increased since 2010, and they also corresponded to the top two positions with respect to the number of recent filings per application area. (See Figure 1B.) Thus, this data is consistent with a theory that applicants are filing more in application areas with high allowance prospects 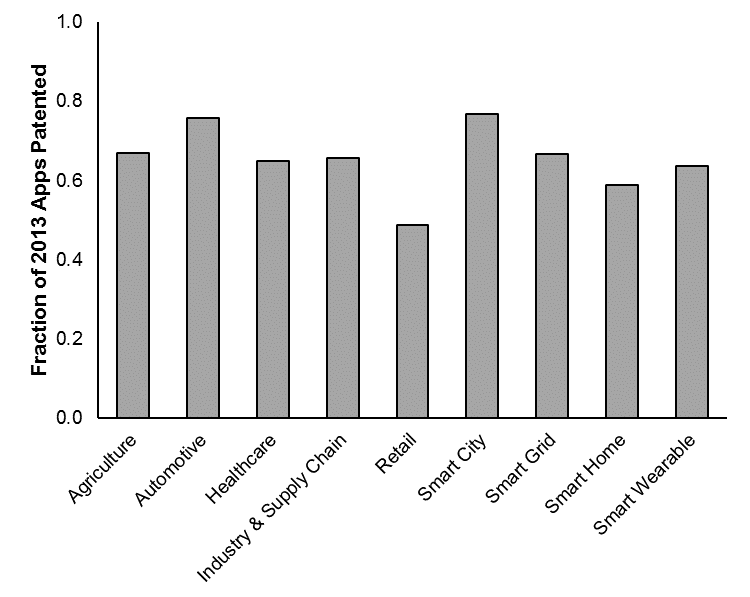 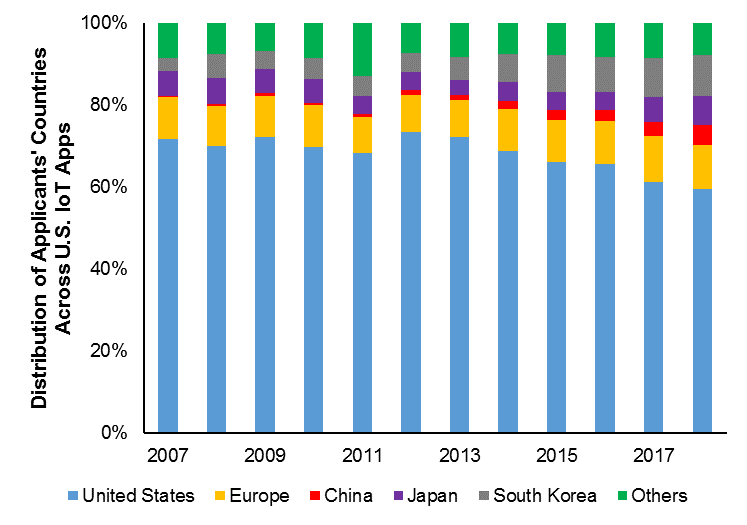 IoT is the fastest-growing sizable industry across our study. (The blockchain industry is associated with higher relative growth but remains very small by absolute numbers.) However, the filing intensity varies rather substantially across industries and appears to be related to allowance rates. Though U.S. applicant filings are increasing by number, the larger growth in foreign-applicant filings suggests that soon it’s possible that fewer than half of the U.S. IoT applications will be owned by U.S. entities. We hope that IoT-focused companies can use this data to size up this emerging patent space and to help shape their patenting strategies. A copy of the full published study is available with additional detail here