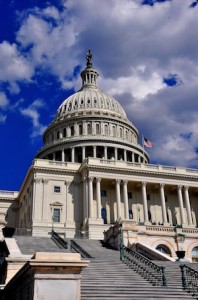 This week on Capitol Hill, both the U.S. House of Representatives and the U.S. Senate are quiet for the next two weeks as the House enters district work periods and the Senate holds state work periods. However, various policy institutes around the nation’s capital continue to host events related to technology and innovation, and the Supreme Court will hear oral arguments in Andrei Iancu, Under Secretary of Commerce for Intellectual Property and Director, Patent and Trademark Offce v. Erik Brunetti. The week kicks off early on Monday with an all-day event at the Internet Society looking at the prospects of federal legislation to improve consumer data privacy from various angles and the Brunetti oral argument. The Cato Institute will host events related to government regulation of social media, as well as the section of U.S. Internet law which largely eliminates legal liability for online service providers based on user-generated content. The week wraps up with an event at the Center for Strategic and International Studies, which will look at U.S.-Australia cooperation in the digital economy, among other sectors.

Data Privacy: Challenges, Opportunities, and the Prospects for Legislation in the U.S.

In the wake of the European Union’s enactment of the General Data Protection Regulation and the State of California’s passage of the California Consumer Privacy Act of 2018, there has been a growing interest in looking at the opportunities, challenges and potential effects of data privacy legislation put in place by the U.S. federal government. This all-day event includes four different panel discussions. The first panel will explore civil rights and culture in a time of surveillance; the panel includes Hasan Elahi, Assistant Professor and Director of the Digital Cultures and Creativity Honors Program, University of Maryland; Ashkhen Kazaryan, Director of Civil Liberties and Legal/Research Fellow, TechFreedom; Tijana Milosevic, Postdoctoral Fellow, Department of Media and Communications, University of Oslo; and Noah Shachtman, Editor in Chief, The Daily Beast. This panel will be moderated by Aram Sinnreich, American University School of Communication.

In January, the Supreme Court agreed to hear Iancu v. Brunetti (Case No. 18-302). The petition for certiorari was filed in November by the United States Patent and Trademark Office (USPTO) on appeal from a U.S. Court of Appeals for the Federal Circuit decision that held the Lanham Act’s prohibition on “immoral” or “scandalous” marks violates the First Amendment’s free speech clause. The case is the second in two years that the Court has taken on the subject; in Matal v. Tam, 137 S. Ct. 1744 (June 19, 2017), the Court affirmed the Federal Circuit’s holding that the disparagement prong of Section 1052(a) was unconstitutional. IPWatchdog will have a full report on the arguments this week.

Why the Government Should Not Regulate Content Moderation of Social Media

Allegations that social media companies have been censoring content reflecting certain political viewpoints have been in the spotlight in recent years, and calls for government regulation of social media content moderation have gone so far as to suggest nationalizing those entities for the public interest. Last week, the Senate Subcommittee on the Constitution held a hearing on the subject of technological censorship by social media companies after Facebook CEO Mark Zuckerberg called for higher levels of government regulation to prevent what he called “harmful content.” This event at the Cato Institute will explore the role that government should play in regulating content moderation or whether intervention by the government would result in unintended consequences, including the stifling of free speech. Speakers will include John Samples, the author of the recently published policy analysis Why the Government Should Not Regulate Content Moderation by Social Media; and Matthew Feeney, Director of Cato’s Project on Emerging Technologies

Secular Stagnation and the Future of Global Macroeconomic Policy

Secular stagnation in global markets has spread in recent years both because the industrialized world has passed peak central bank independence and because the information technology revolution has resulted in demand side problems after progress in the supply side. This is the argument laid out by Lawrence Summers, Charles W. Eliot University Professor and President Emeritus, Harvard University, as well as the former U.S. Secretary of the Treasury under then-President Bill Clinton and former Director of the White House National Economic Council under then-President Barack Obama. Summers will discuss how events over the last five years have confirmed his thesis on stagnation.

The Twenty-Six Words That Created the Internet

Section 230 of the Communications Decency Act of 1996 (CDA) contains 26 words that effectively created the environment of low liability for online service providers regarding user content: “No provider or user of an interactive computer service shall be treated as the publisher or speaker of any information provided by another information content provider.” As a result, online service providers have been allowed to flourish without the fear of legal liability created by user-generated content. This event will look at the history of CDA Section 230 and the most prominent cases decided under that law, including a panel comprising Jeff Kossoff, Assistant Professor of Cybersecurity Law, U.S. Naval Academy, and Author, The Twenty-Six Words That Created the Internet; Emma Llansó, Director, Center for Democracy and Technology’s Free Expression Project; and David Post, Adjunct Scholar, Cato Institute, former I. Herman Stern Professor of Law, Temple University Law School. The panel discussion will be moderated by John Samples, Director, Center for Representative Government, Cato Institute.

Negative Emissions Technologies: Sucking Carbon Out of the Air

Concerns over climate change have spurred interest in the development of technologies related to carbon capture and carbon dioxide removal (CDR) for remediating the environment and preventing the potential consequences of climate change. A recent special report from the Intergovernmental Panel on Climate Change included CDR in its analysis of pathways which could be taken to ensure that levels of global warming stay within 1.5?. This event will look at ways that the federal government could advance development of CDR technologies during the 116th Congress. Speakers at this event include Colin Cunliff, Senior Policy Analyst, Information Technology and Innovation Foundation; and Erin Burns, Associate Director, Policy, Carbon 180.

Delivering Prosperity in the Indo-Pacific

Given the many foreign policy issues playing out between the foreign powers on either side of the Pacific Ocean, the future of U.S.-Australia cooperation, especially regarding the economic partnership between the two, will be crucial to stability in the region. This event will explore the recent CSIS Simon Chair in Political Economy brief Delivering Prosperity in the Indo-Pacific, which looks at opportunities for U.S.-Australia cooperation in various sectors including the digital economy. The event’s speaker is Matthew Goodman, Senior Vice President, CSIS Simon Chair in Political Economy and Senior Advisor for Asian Economics.