“If we don’t quickly right the ship, we’re going to find that China will dominate the world economy within five years and the United States will be an economic backwater.” 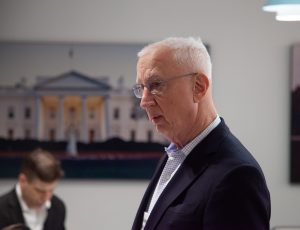 During a break at IPWatchdog’s recent Patent Masters™ Symposium, former Federal Circuit Chief Judge Paul Michel went on record to express his grave concerns about the U.S. patent system and where he believes it’s headed. Like many of the Patent Masters, Michel’s view was decidedly grim, but he did express optimism about the new IP leadership in Congress.

What are you most worried about with respect to the state of the U.S. patent system?

My big concern about the current American patent system is that it has ceased to function efficiently and effectively. It is plagued by massive uncertainty and unpredictability. Patents have become unreliable, therefore investments aren’t being made, inventions aren’t being conceived and perfected, and the fundamental problem is that the Supreme Court has treated patent law much the way it treats constitutional case law, such as freedom of religion or freedom of speech, under the First Amendment. Patent law is part of commercial law, and 99% of the decisions that have to be made are made outside of court and require clear lines and clear rules and high reliability. The courts have taken that away, particularly the Supreme Court, and it has made the system dysfunctional. The system has to work for the people who need to use it, it’s not about making it some philosophically perfect ideal in the eyes of nine justices on the Supreme Court.

If the nine Justices of the Supreme Court can’t get it right, do you think legislators or the Federal Circuit can?

The Federal Circuit is trapped by the Supreme Court. They have to follow all of the Court’s holdings and implications, and to some extent even the loose language of the Court’s decisions. Their freedom of action is very limited now, for example, in the area of patent eligibility. I think they could do somewhat more than they’ve done, but still it’s quite a limited zone where they could improve clarity.

The Supreme Court has made it clear that they have no interest in clarity at all. Every single review of the Federal Circuit in the last decade and a half has cut against clarity. They’re putting all of the priority on this idea of perfect justice and no priority on clarity, predictability, reliability, or stability, and those seem to me to be the urgent needs of the system. The Supreme Court has the Federal Circuit and lower courts trapped, and to an extent they have the USPTO trapped, and they’re making broad policy involving innovation and invention and economics way beyond their area of expertise and without the kind of record that only the Congress can amass through years of hearings with hundreds of witnesses and thousands of written submissions.

As imperfect or even dysfunctional, in the view of some, as the Congress might seem, it is the right branch of the government to be making these hugely important national decisions that are going to decide job creation, global competitiveness, national security, economic growth, and productivity growth. Even if they make decisions I might disagree with, it’s still better for the decisions to be made by the duly elected representatives of the citizenry, not by black robed lawyers at any level, including the Supreme Court. I’m of the view that Congress can learn what it needs to learn, as it does all the time, to make rational, logical decisions on behalf of the country and, unlike the courts, if it works badly in practice they can come back and change it. The Supreme Court is focused on precedents, so once set it’s very hard to ever get around them. When Congress initiates a new law, it only applies in the future; when the Supreme Court or Federal Circuit decides a case, they’re often deciding that something done 10 or 20 years ago now has to be invalidated. The retroactive reach of judicial decisions is hugely problematic in our society.

But didn’t we end up where we are today in part because of Congress’ short-sightedness on the America Invents Act (AIA)?

I agree that some of the AIA provisions were poorly thought out and poorly drafted. I particularly think that the three types of patent office review created in the AIA were badly designed, but the answer to that is that Congress should double back and change the design and improve it. In the case of tax law, for example, almost every single year they go back and revise the law they passed the year before because they discover problems in it; the problem here is that the AIA was passed almost nine years ago and they haven’t gone back yet, but they should, and I hope they do it promptly.

Are you optimistic about the activity there has been recently on patent reform?

I’m partly encouraged by the fact that the Senate Judiciary Committee, for the first time in 15 years, has reconstituted a subcommittee that will focus on patents and related matters. Secondly, it is chaired by a very knowledgeable Senator, Thom Tillis, who worked at Wang Laboratories, IBM, and PricewaterhouseCoopers, so he has broad understanding of the patent system, and his bipartisan partner is Senator Chris Coons. The two of them are working in perfect harmony and providing great leadership to this committee, and I’m sure every issue they take up will be very thoughtfully treated, because they’re interested, knowledgeable, have studied this, and have met with lots of people. This is the first time we’ve seen this. Those driving the AIA were not very knowledgeable about the patent system. And on the House side, the new chairman, Hank Johnson, is a former judge who is quite knowledgeable and interested in patents. When I testified in front of the House IP Subcommittee twice in July, 2017, he asked extremely thoughtful questions that showed preparation and that he’d done his homework and had a sense of the real issues. So, suddenly we have leadership that we didn’t have before. We’re in a completely new era just this year compared to the last year.

What do you think the future holds if these issues aren’t resolved?

Well, patent eligibility is one of the terribly harmful problems in patent law and practice, and I have alluded to defects in inter partes review—partly because of the way the statute was written, but it was made even worse by the USPTO in the rules and practices they adopted to implement it—but the biggest problem of all is the complete unavailability of injunctions. They are routine in Germany, Britain, and most jurisdictions in Asia, and when an injunction is issued, after a party is proven in court to have infringed, the parties almost always immediately settle. In America, this doesn’t happen anymore because there are hardly any injunctions issued. So, when you take all three of these gigantic problems together, their combined effect is to pretty much wreck the whole system. So, investments are going overseas because the incentives elsewhere are now much better. If we don’t quickly right the ship, we’re going to find that China will dominate the world economy within five years and the United States will be an economic backwater. This is a completely self-inflicted wound. We don’t need to go down this road; we ought to get on a better road, and the sooner the better.