Held: The Federal Circuit said inherency analysis requires demonstrating that the natural result from the operation as taught would result in the performance of a claimed function. Inherency, however, cannot be established by a mere possibility or probability that result would occur. 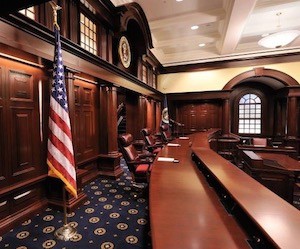 The Federal Circuit recently reversed a decision of the Patent Trial and Appeal Board (Board) finding claims of a patent owned by PersonalWeb Technologies, LLC to be invalid.  Apple, Inc. (Apple) petitioned for inter partes review (IPR), and the Board found certain claims of the patent to be invalid as obvious in light of two references.  The Federal Circuit reversed, holding the Board provided insufficient evidence to support a finding of inherency.  Pers. Web Techs., LLC v. Apple, Inc., No. 2018-1599, 2019 U.S. App. LEXIS 6919 (Fed. Cir. Mar. 8, 2019) (Before Moore, Taranto, and Chen, Circuit Judges) (Opinion for the Court, Chen, Circuit Judge).

PersonalWeb Technologies LLC (PersonalWeb) is the owner of the ‘310 patent, which is directed toward generating a substantially unique content-based identifier for each data item in a data processing system. Apple initially filed for IPR of the ‘310 patent in 2013. In March of 2015, the Board issued a final written decision concluding that certain claims of the ‘310 patent are unpatentable as obvious over a combination of two prior art references—U.S. Patent Nos. 5,649,196 (Woodhill) in view of 7,359,881 (Stefik). PersonalWeb then appealed the Board’s decision to the Federal Circuit.

Back to the Board

On appeal, the Federal Circuit affirmed the Board’s claim construction but vacated and remanded the Board’s obviousness finding for further consideration. The Federal Circuit reached its decision by determining the Board’s analysis regarding obviousness was inadequate, including its analysis of: (1) whether the prior art references disclosed all of the elements recited in the challenged claims and (2) whether a skilled artisan would have been motivated to combine the references in the manner recited in the ‘310 patent.

The main element in dispute in that appeal (as well as the later appeal) was the claim limitation “causing the content-dependent name of the particular data item to be compared to a plurality of values.” The Board cited only Stefik as satisfying this element, but Apple’s petition relied only on Woodhill for this element. Accordingly, the Federal Circuit disagreed with the Board’s use of Stefik and remanded the case with instructions for the Board to consider only whether column 17 of Woodhill, which was the only portion of Woodhill cited by Apple, taught this limitation. The Court also rejected the Board’s motivation-to-combine analysis, which merely affirmed Apple’s allegation that a person having ordinary skill in the art (POSA) “would have allowed for the selective access features of Stefik to be used with Woodhill’s content-dependent identifiers feature.” The Court explained that this reasoning “said nothing more than the two references could be combined, not that there would [have] been a motivation to combine them and lacked any explanation as to how the combination of the two references was supposed to work.”

On remand, the Board maintained the same obviousness theory of unpatentability, except that the Board replaced its previous reliance on Stefik for teaching the “compared to a plurality of values” element of Claim 24 of the ‘310 patent with reliance on column 17 of Woodhill. Specifically, the Board adopted Apple’s experts’ conclusion that Woodhill inherently disclosed the disputed limitation in claim 24, i.e., “Woodhill, without saying so, necessarily compares the content-based identifier (Binary Object Identifier) of the particular data item (binary object) to a plurality of values (an unmentioned but necessarily present database of Binary Object Identifiers).” The Board also elaborated on its analysis of a POSA’s motivation to combination Woodhill and Stefik.

PersonalWeb again appealed the Board’s decision. On appeal, the Federal Circuit determined the Board’s inherency finding derived from column 17 of Woodhill lacks substantial evidence.  The Federal Circuit noted that “[w]hile it is possible that Woodhill’s system utilizes an unstated Binary Object Identifier lookup table to locate binary objects of a previous version of a file that is going to be restored (column 17 of Woodhill), mere possibility is not enough.” Instead, to demonstrate inherency, a party must “show that natural result flowing from the operation as taught would result in the performance of the questioned function.” PAR Pharm., Inc. v. TWI Pharm., Inc., 773 F.3d 1186, 1195 (Fed. Cir. 2014). Because the Federal Circuit determined the Board’s inherency analysis of the aforementioned feature was improper, it reversed the Board’s decision without reaching the question of motivation to combine.