IP and Innovation on Capitol Hill: Week of March 18 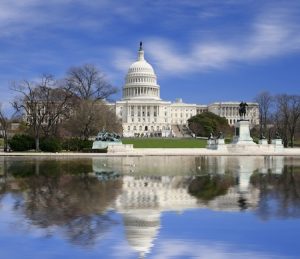 This week in Washington, D.C., Capitol Hill is silent due to district work periods for the House of Representatives and state work periods for the Senate. However, the nation’s capital is still very busy with a collection of think tank events related to innovation and technology. A pair of events at New America looks at how technology and social media can stem the tide of extremist ideologies or how advances in DNA testing can help solve cold cases. Cybersecurity challenges at the next Summer Olympic Games are the topic of discussion at the Wilson Center. The Heritage Foundation also hosts a pair of events looking at how the Constitutional Framers viewed property and issues with China-based Huawei’s dominance in 5G. Closing out the week is a Friday event at the Information Technology & Innovation Foundation exploring challenges to the U.S. Postal Service in the e-commerce era.

Farah Pandith’s new book How We Win: How Cutting-Edge Entrepreneurs, Political Visionaries, Enlighted Business Leaders, and Social Media Mavens Can Defeat the Extremist Threat points out the ongoing issues with ISIS and radical extremist ideologies while offering a path towards victory against those ideologies drawing on her experiences at the National Security Council, U.S. Department of State and USAID. This event features a discussion with Pandith that will be moderated by Peter Singer, Strategist and Senior Fellow, New America.

The 2020 Summer Olympic Games in Tokyo will bring a great deal of attention to the Japanese capital, and while it will give that country the chance to showcase its developments in advanced technology, it will also make it a prime target for cyber attacks. This event will look at the cybersecurity threat landscape for the 2020 Games and the potential for U.S.-Japanese collaboration to fend against cyber attacks. Speakers at this event include Motohiro Tsuchiya, Professor, Graduate School of Media and Governance, Keio University and Deputy Director, Keio Global Research Institute; and Meg King, Strategic and National Security Advisor to the Wilson Center’s CEO and President, Director of the Digital Futures Project, and Coordinator of the Science and Technology Innovation Program. The event will be moderated by Shihoko Goto, Deputy Director for Geoeconomics and Senior Associate for Northeast Asia, Asia Program.

The Framers’ View of Property

Recent jurisprudence from the U.S. Supreme Court has taken a limited view of the importance of property compared to the original intent of the Framers of the Constitution. While it’s not specifically stated in the event description, frequent readers of this website will note that this has certainly been an issue in the intellectual property sector thanks to decisions such as Oil States v. Greene’s Energy Group. This event will be hosted by David Burton, Senior Fellow in Economic Policy, Roe Institute for Economic Policy Studies, Institute for Economic Freedom and Opportunity. The event also features Paul Larkin, Senior Legal Research Fellow, The Heritage Foundation.

The Highway Trust Fund that pays for federal transportation infrastructure is set to run out of funds during 2021, but innovation from the private sector, along with a legislative fix on funding from Congress, can aid infrastructure development. This event will feature a panel discussion with former U.S. Representative Joe Crowley; former U.S. Representative Bill Shuster; and Jane Garvey, Chairman, North America, Meridiam.

Your At-Home DNA Test Could Crack a Cold Case

Genetic genealogy, or the use of DNA testing in conjunction with family tree mapping, has undergone tremendous advances in recent years, and today, American consumers can even get in-home DNA testing kits. The use of these testing technologies has even led to the solving of crimes which have proven difficult for law enforcement but these uses have also raised privacy issues. This event will feature a panel discussion with Jason Moon, Reporter, New Hampshire Public Radio and Host, Bear Brook; Nila Bala, Associate Director, Criminal Justice & Civil Liberties, Senior Fellow, R Street Institute; and John Fitzgerald, Chief of Police, Chevy Chase Village Police Department. The moderator for this event is Rebecca Lavoie, Digital Director, New Hampshire Public Radio and Host, Crime Writers On…

Army Modernization: Priorities to get to the Army of 2028

At 8:00 AM on Thursday at CSIS Headquarters.

Technological development and innovation are crucial for the U.S. Army along with the rest of the nation’s military as it works to stay ahead of its counterparts on the battlefield. This event will feature a discussion including the Honorable Ryan McCarthy, Under Secretary of the Army; Rep. Anthony Brown (D-MD); and Mark Cancian, Senior Advisor, International Security Program, Center for Strategic and International Studies.

China, Huawei and the Challenge of 5G

At 10:00 AM on Thursday at the Heritage Foundation, Lehrman Auditorium.

The fifth generation of wireless technology, commonly known as 5G, is currently under development worldwide and will bring about tremendous advances in device connectivity and mobile data download speeds. One of the firms which has taken the lead in 5G advancements is Huawei, a company whose close ties to China’s national government have led to controversy and concerns about national security among intelligence sharing partners who end up adopting Huawei’s 5G technology in their connectivity infrastructure. This event features a panel discussion including Dr. John Hemmings, Director, Asia Studies Centre at the Henry Jackson Society and Adjunct Fellow, Center for Strategic and International Studies; Dean Cheng, Senior Research Fellow, Asian Studies Center; and Klon Kitchen, Senior Research Fellow, Technology, The Kathryn and Shelby Cullom Davis Institute for National Security and Foreign Policy. The panel discussion will be moderated by Jeff Smith, Research Fellow, South Asia, Heritage Foundation.

Originally scheduled for February 20. The U.S. Postal Service has come under increasing scrutiny as e-commerce shipments through the USPS have boomed in recent years. The nation’s mail carrier operates as a monopoly in first-class mail delivery although it is a competitor in package delivery against firms such as UPS and FedEx. Some critics believe the USPS is subsidizing its package delivery services with mail delivery revenue to gain a competitive edge while others argue that USPS’ profitable package delivery service actually offsets costs for mail delivery. Increased regulation could hurt the USPS’ ability to fulfill e-commerce shipments and disproportionately hurt rural Americans. This event will feature a panel discussion with Edward Hudgins, Research Director, The Heartland Institute; James Sauber, Chief of Staff, National Association of Letter Carriers; and Ashley Shillingsburg, Senior Manager of Government Relations, eBay. The event will be moderated by Robert Atkinson, President, Information Technology & Innovation Foundation.