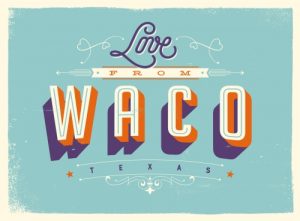 Marshall, Texas has been, and will likely continue to be, one of the major patent litigation cities in the United States. But, Waco, Texas is quickly becoming the new mecca for patent infringement lawsuits due to recent case law and the arrival of a patent-savvy district judge.

In the world of patent litigation, we all know Marshall, Texas. The Eastern District of Texas—which includes the Marshall Division—is known to be one of the largest as far as numbers of patent litigation lawsuit filings in the U.S. The economic impact on the region has been significant, as service industries such as hotels, temporary offices, restaurants and catering companies grew to serve the regular flow of litigators and their clients coming to Marshall for hearings and trials from around the country. Several national and regional law firms specializing in patent litigation opened satellite offices in and around Marshall to serve their frequent needs for access to the busy courthouse.

While Marshall remains one of the patent litigation capitals of the world, the recent U.S. Supreme Court decision in TC Heartland v. Kraft Foods, 137 S. Ct. 1514 (2017) appears to be changing this. TC Heartland, in sum, dictates that patent infringement lawsuits must now be brought in the district in which the defendant is established or has a regular place of business. Since TC Heartland, the Eastern District of Texas has seen an increase in motions to transfer cases to other districts and a decline in new patent infringement case filings. The statistics indicate that many of these cases are being transferred to or are now being filed primarily in California and Delaware.

But even as Marshall’s patent docket slows (albeit to still very high levels), the Honorable Alan D. Albright—District Judge in the Western District of Texas, Waco Division—is positioning his city to be a new hotspot for patent litigation. Ever since Judge Albright took the bench in September 2018, he has reached out to members of the patent litigation bar to encourage cases to be filed in his court. And the bar has taken notice. Prior to Judge Albright’s appointment, only 10 patent litigation cases were filed in Waco during the entire history of that division. Since September 2018, 24 patent litigation cases have been filed in Judge Albright’s court. Although this is still a far cry from the Marshall case docket by monthly new filings, the recent jump is most likely to be the start of an upward trend.

There are several reasons why Waco is drawing the attention of patent litigators, especially those representing plaintiffs. The first is a judge well-versed in patents and patent litigation who is interested in taking new cases. Judge Albright earned his J.D. from the University of Texas School of Law. From approximately 1992 to 1999, he served as a U.S. Magistrate Judge in the Austin Division of the Western District of Texas, before litigating patent cases on behalf of both plaintiffs and defendants in private practice at the law firm Bracewell LLP in Austin until 2018. He is also a former adjunct professor for the University of Texas’ trial advocacy class and, notably, is admitted to the prestigious American College of Trial Lawyers.

Second, Judge Albright has taken his wealth of knowledge regarding patent litigation to craft local patent rules that focus on speedy case resolution. To that end, in Judge Albright’s short time on the bench, he has already issued a standing order governing proceedings for patent cases and a proposed scheduling order for patent cases. One unique aspect of Judge Albright’s case management strategy includes early Markman hearings with quick resulting claim construction orders—pivotal junctures in most patent litigations. Another is his willingness to personally resolve discovery disputes by phone in an expeditious manner. Patent litigation is among the most expensive form of litigation there is, and, at times, involves billions of dollars at risk. The clients and law firms involved with most patent litigation that goes all the way to trial will spend an average of $3.5 million per side on litigation expenses. Judge Albright’s approach, designed to quickly resolve significant case issues, means lower average litigation costs to parties in comparison to cases filed in many other districts. It remains to be seen whether these advantages will be reduced in the future if Judge Albright’s view of a thriving and popular patent docket materializes, but until that happens, plaintiffs can be assured of a quick claim construction and early trial date.

Another consideration weighing in Waco’s favor is the jury pool. Notwithstanding the fact that most cases settle before trial, one must always litigate a case as if trial will take place, and such a strategy will include considerations regarding the potential jury of our peers that may be deciding the case. It is no secret that the Marshall juries are thoughtful and diligent in their deliberations, but one of the advantages to patentees with respect to the Marshall jury pool is that the jurors in many cases have a healthy respect for private property rights. As a result, juries in Marshall have at times granted significant awards to patent owners over the years for patent infringement. The two cities differ in size (Marshall has a population of approximately 25,000 people, whereas Waco has a population of approximately 136,000). But despite this size difference, the jury pool available to Waco—suburban and rural landowners, many appreciating personal property rights as a result of family agricultural, timber or mineral rights—is similar in many important ways to that of Marshall.

Lastly, but certainly not least, Waco is likely a proper venue for a significant percentage of high-value patent litigation cases. Waco is in the same District (the Western District of Texas) as Austin, an established center of high-technology, telecommunications and industry where many argue that some of the most likely patent infringement defendants reside. Having said that, Waco itself is also growing quickly, with an ever-increasing number of companies, including technology companies, moving to the area. San Antonio, Texas’ second largest city and a growing metropolis, is also within the Western District of Texas. Corporations with significant presence in and around these cities are likely subject to venue in Waco.

In addition to the above, it is worth noting that the travel to Waco for hearings or trial is relatively easy. Waco is one and a half hours from either Austin, Texas (to the south) or Dallas, Texas (to the north). Advantageously, this allows litigators multiple travel choices and increased flight and timing options.

The effects in Waco are already being seen. Law firms with significant patent litigation practices are now considering offices in Waco. Some have already made that decision, including the law firm Gray Reed, which recently announced plans for a Waco office. Because of the city’s growth and thriving tourism sector, due in large part to the popular HGTV show “Fixer Upper,” numerous new hotels are opening and being constructed, which could ease future needs for attorneys traveling to Waco for hearings and trial.

With 24 patent case filings to date, Judge Albright and the Waco Division of the Western District of Texas currently claim only a small percentage of U.S. patent litigation cases. But the combination of a patent-savvy judge actively evangelizing for new cases, a fast docket with the promise of speedy resolution, a jury pool that respects personal property and a location that can support venue post-TC Heartland may be a powerful enough draw for patentees to grow Waco into the next big patent litigation hotspot.

David Lisch advises on a broad range of intellectual property matters for startups and growing companies, helping them to achieve their business and branding goals. David primarily focuses on handling every phase [...see more]