A party joined in an inter partes review under Section 315(c) has a statutory right under Section 319 to appeal the Board’s final written decision, even if the party filing the original petition lacks Article III standing to appeal. 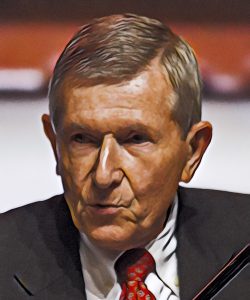 The Federal Circuit on February 1 affirmed the Patent Trial and Appeal Board’s final written decision in an inter partes review concluding that the claims of a patent directed to a composition for treating epilepsy are not unpatentable. The Federal Circuit first visited the issue of whether three petitioners—Mylan Pharmaceuticals, Breckenridge Pharmaceuticals, and Alembic Pharmaceuticals, all of whom were sued for infringement of the patent more than one year prior to the institution of the IPR, and all of whom were joined in the IPR under 35 U.S.C. § 315(c)—had standing to appeal the Board’s final decision. The Court held that the petitioners had a statutory right, under 35 U.S.C. § 319 to appeal. The Court also discussed whether there was a motivation to combine the “classical isosteres” disclosed in a secondary reference with the lead compound disclosed in a primary reference, ultimately holding that the higher expected potency of the primary reference’s lead compound over the claimed compound would not create a motivation to combine. Mylan Pharms. Inc. v. Research Corp. Techs., Nos. 2017-2088, 2017-2089, 2017-2091, 2019 U.S. App. LEXIS 3282 (Fed. Cir. Feb. 1, 2019) (Before Lourie, Bryson, and Wallach, Circuit Judges) (Opinion for the Court, Lourie, Circuit Judge).

The case centered around U.S. Reissue Patent 38,551 (the ’551 patent), owned by Research Corporation Technologies, Inc. (RCT). The claims at issue in the ’551 patent, Claims 8–13, are directed to compounds and pharmaceutical compositions for treating epilepsy and other central nervous system disorders. Claim 8 is directed to the particular compound (R)-N-benzyl-2-acetamido-3-methoxypropionamide, otherwise referred to as lacosamide.

During the inter partes review, Argentum advanced a lead compound analysis for Ground (1). Argentum offered Kohn—a 1991 article authored by the named inventor of the ’551 patent—as a primary reference providing the proffered lead compound. A study in Kohn disclosed (R,S)-2-acetamido-N-benzyl-2-methylacetamide as a lead compound and replaced the ?-methyl group with functionalized nitrogen, oxygen, or sulfur substituents. Kohn identified that “in the most potent analogues… a functionalized oxygen atom existed two atoms removed from the ?-carbon atom.” The reference also identified a compound 31.

Argentum offered Silverman to supply a motivation to modify the amine of compound 31’s methoxyamino group with a methylene link, as found in lacosamide, “to yield a more stable, synthetically accessible, pharmaceutically common and acceptable moiety.” Silverman is a book chapter on drug design, and the reference provided a list of classical isosteres: –CH2–, –NH–, –O–, –S–, and –Se–. Argentum argued that, of these classical isosteres, “only methylene would result in a more pharmaceutically common and acceptable compound and resolve the potential stability and synthesis concerns presented by the methoxyamino moiety.” According to Argentum, Silverman would have motivated a person of skill in the art to replace the methoxyamino in compound 31 to create lacosamide, and one would have a reasonable expectation of success in doing so.

The Board disagreed with the petitioners with respect to Ground (1). The Board found “that converting the methoxyamino group would have been viewed as undesirable because the compounds in Kohn 1991 without a methoxyamino or nitrogen-containing moiety at the ?-carbon had reduced activity.” The Board credited evidence suggesting that the methoxyamino group of compound 31 would be expected “to confer significant activity to the compound.”  The Board concluded its analysis by holding that the petitioners failed to meet their burden to prove by a preponderance of the evidence that Claims 1–9 would have been obvious, i.e., the petitioners failed to establish a motivation to combine.

As for Ground (2), the Board did not address the merits specifically. The Board reasoned that, since it held Claim 1 is not obvious over the references, the dependent claims would not be obvious. The original petitioner, Argentum, did not appeal the Board’s decision; however, Mylan, Breckenridge, and Alembic, the joined petitioners, all did appeal.

The Court first addressed the issue of standing. RCT argued that the three joined petitioners lacked standing because they did “not fall within the zone of interests of 35 U.S.C. § 319.” RCT argued that, since RCT brought infringement actions against the three Appellants a year before this IPR petition was filed, each Appellant’s petition was time-barred. Additionally, RCT argued that the “statutory scheme here… does not authorize Appellants to seek federal court review” because the original Petitioner would have lacked Article III standing, i.e., it was merely an “agency matter.”

The Court dismissed RCT’s standing arguments by conducting a brief “zone of interests” analysis. The Court first noted 35 U.S.C. § 315(c) provides that the director “may join as a party to the inter partes review any person who properly files a petition under section 311 that the Director… determines warrants the institution of” an IPR. Additionally, Section 319 states that a “party dissatisfied with the final written decision” of the Board “may appeal the decision pursuant to sections 141 through 144. Any party to the inter partes review shall have the right to be a party to the appeal.” The Court held that, as stated in the statute, any party has the right to appeal the Board’s decision in an IPR, and this must include joined parties, or else the word “party” in Section 315 would have a different meaning than the word “party” in section 319. Accordingly, the Court held that the three joined Petitioner/Appellants had standing to appeal.

The Court then proceeded to the merits of the case. The Court agreed that the Board’s findings were supported by substantial evidence. The Court found the evidence that the predicted potency for lacosamide was less than the predicted potency of compound 31 to be persuasive. Accordingly, the Court agreed that one of skill in the art would not have been motivated to modify the amine of compound 31’s methoxyamino group with a methylene link, as found in lacosamide.

The Court also held that the Board did not err in concluding that the Appellants did not meet their burden of establishing obviousness for the dependent claims (Claims 11–13), because “[d]ependent claims, with added limitations, are generally not obvious when their parent claims are not.”

Finally, as a last alternative, the Appellants requested the case be remanded in light of SAS Institute, Inc. v. Iancu, 138 S. Ct. 1348 (2018). The Court held that the party’s request was waived because the request was made more than six months after the SAS decision.

In rejecting the Appellant’s arguments that the Board erred in its non-obviousness conclusion, the Court affirmed the Board’s conclusion that claims 8–13 would not have been obvious at the time of the invention.