“Where the PTAB determines a single reference discloses all limitations of a claimed invention and relies on a second reference for what is generally known by one of skill in the art, there is no need to make findings regarding a motivation to combine the references.” 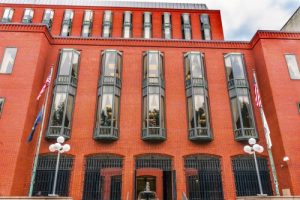 Hewlett Packard Enterprise Co., HP Enterprise Services, LLC, and Teradata Operations, Inc. (collectively, HP) sought inter partes review (IPR) of U.S. Patent No. 6,597,812, alleging that the claims were obvious under 35 U.S.C. §103(a) over U.S. Patent No. 4, 929, 946 (O’Brien) and further, in view of a data compression textbook by Mark Nelson (Nelson). After instituting review, the PTAB found the challenged claims obvious over the prior art. Realtime Data appealed on two grounds: (1) that the PTAB erred in determining that a person of ordinary skill would have been motivated to combine the teachings of O’Brien and Nelson, and (2) that the PTAB erred by failing to properly construe the term “maintaining the dictionary”.

No Motivation to Combine Necessary

HP’s primary argument to the PTAB was that all of the elements of claims 1–4, 8, and 28 were disclosed in O’Brien. HP relied on Nelson to demonstrate that a person of ordinary skill in the art would have understood that the string compression disclosed in O’Brien was a type of “dictionary encoder”, which a terminology used in the ’812 patent specification, as well as a term specifically used in claim 28. Alternatively, HP also argued that Nelson disclosed certain of the elements in the claims at issue.

On appeal, the Federal Circuit accepted HP’s primary argument that all of the challenged claims were disclosed in O’Brien, with Nelson used only to demonstrate that the term “dictionary encoder” used in the ‘812 patent was actually what was disclosed in O’Brien. HP thus relied on Nelson merely to explain that O’Brien’s algorithm was a dictionary algorithm, which Realtime conceded. Because the PTAB did not rely on Nelson for the disclosure of any particular element or teaching and instead relied on O’Brien alone to supply the elements and teachings, there was no obligation to make any finding regarding a motivation to combine O’Brien and Nelson. Therefore, the PTAB “did not err when it concluded that claim 1 was invalid under § 103 based on O’Brien alone,” Judge Stoll wrote.

While the outcome in the case would be unchanged, an anticipation rejection under 35 U.S.C. § 102 is proper when a single reference provides exact identity with the claimed invention. Obviousness always requires more than a single reference, although that which is additional does not need to add an element or teaching found in the claims. As here, the secondary reference—Nelson—added what is understood by one of skill in the art. The secondary reference merely demonstrated that the language used in the primary reference would be understood to be referring to the same thing as the language used in the claims being reviewed. Thus, Nelson was used to establish what would be understood by one of skill in the art.

It is inappropriate to think of a primary reference plus a reference explaining what one of skill in the art would understand as a single reference obviousness rejection. Single reference obviousness rejections are fiction. Continually referring to such a fictitious rejection only encourages Examiners and certain PTAB panels to misapply common sense in order to supply missing elements, or to inappropriately take official notice that something is well-established or understood when that matter is disputed.

No Error Construing “Maintaining a Dictionary”

At first glance, this seems odd. How could the PTAB rely on a narrowing dependent claim for the meaning of the term to be narrowed in the independent claim? As the Federal Circuit explained, the language of claim 4 directly mimics the portion of the specification that explains what it means to maintain a dictionary. Therefore, the text explaining the specific way in which a dictionary is dynamically maintained would be at least one way of maintaining the dictionary covered within the meaning of claim 1, as the PTAB found.

Unfortunately for Realtime, the proposed construction offered to and rejected by the PTAB with respect to the meaning for “maintaining a dictionary” was not supported by the intrinsic evidence.

Ultimately, Realtime could not demonstrate that the PTAB committed legal error by failing to adopt its offered claim construction. The Federal Circuit concluded the PTAB committed no error in finding that O’Brien disclosed the “maintaining a dictionary” limitation of claim 1.