“When an alleged infringer knowingly adopts a trademark that is similar to the trademark of another, the court is allowed to presume that the public will be deceived.” 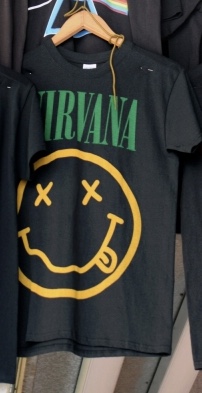 On December 28, 2018, the limited liability company representing famed Seattle-area grunge rock band Nirvana sued clothing designer Marc Jacobs and fashion retailers Neiman Marcus and Saks Fifth Avenue in the U.S. Federal District Court for the Central District of California. At the center of the lawsuit are copyright and trademark infringement allegations regarding the use of Nirvana’s smiley face logo on a line of designer clothing made by Marc Jacobs.

Nirvana alleges that Marc Jacobs has used the band’s common law trademarks and infringed the band’s copyright in the smiley face logo in a misleading way in order to make it appear that Marc Jacobs’ “Bootleg Redux Grunge” clothing line is endorsed by or somehow associated with Nirvana. Nirvana first licensed the use of the smiley face logo, designed by deceased Nirvana front man Kurt Cobain in 1992, and it has been continuously used to identify Nirvana’s music and licensed merchandise since.

In November 2018, Marc Jacobs announced the release of a Bootleg Redux Grunge line which includes clothing items that utilize an almost perfect replication of certain aspects of the Nirvana smiley face logo. The faces match down to the seemingly careless squiggles in the face and mouth outline, although the x’s used as eyes in Nirvana’s logo were replaced by a capital “M” and a capital “J” in the Marc Jacobs version. The Nirvana lawsuit also notes that Marc Jacobs has made the smiley face logo a featured image at events promoting the Bootleg Redux Grunge line and that Marc Jacobs’ promotional materials make references to specific Nirvana songs such as Smells Like Teen Spirit and Come As You Are.

Despite the close resemblance of the Marc Jacobs design to Nirvana’s smiley face, not every trademark attorney believes the Nirvana case is a strong one. Upon reading the complaint, Richard LaBarge, a partner at Marshall, Gerstein & Borun LLP, noted that, for Nirvana to succeed on its trademark claims, it has to establish not only that the smiley face logo called Nirvana to mind in the consumer, but that the consumer would also be confused as to whether the product was authorized by Nirvana. “Just because one mark calls another mark to mind, people tend to think that there’s liability,” LaBarge said. “But on the trademark side, the statute says that the use has to create the likelihood of confusion.”

Nirvana’s anti-corporate grunge aesthetic could wind up being a detriment to the band’s false designation of origin claim. “Because the trademark claim goes back to the idea of consumer confusion, the fact that Nirvana and Marc Jacobs exist in very different environments could lead most purchasers to think that the Marc Jacobs clothing couldn’t possibly be licensed by Nirvana,” LaBarge said.

LaBarge is correct, at least to some extent. The federal trademark claim asserted by Nirvana in the lawsuit is one alleging false designation of origin under the Lanham Act. Even if a trademark is not federally registered, it is still entitled to various protections under the Lanham Act, specifically those set forth in 15 U.S.C. 1125(a). And in the Ninth Circuit, where the Central District of California is located, the test for false designation of origin under the Lanham Act, as well as unfair competition under California common law, is likelihood of confusion. Walter v. Mattel, Inc. 210 F.3d 1108, 1111 (9th Cir. 2000).

So, LaBarge is correct when he says that a false designation of origin claim is all about likelihood of confusion, but in the Ninth Circuit the analysis for likelihood of confusion with respect to a false designation of origin claim will be identical to the analysis in a trademark infringement claim. Dreamwerks Prod. Crp., Inc. v. SKG Studio, 142 F.3d 1127, 1129 n.2 (9th Cir. 1998).

“(1) the strength of the mark; (2) the proximity of the goods; (3) the similarity of the marks; (4) evidence of actual confusion; (5) the marketing channels used; (6) the type of goods and the degree of care likely to be exercised by the purchaser; (7) the defendant’s intent in selecting the mark; and (8) the likelihood of expansion of the product lines.”

While no one factor is determinative, and all factors must be considered, it is certainly true that on any given set of facts there will be factors of greater or lesser importance. For example, the defendant’s intent in selecting the mark (factor #7). When an alleged infringer knowingly adopts a trademark that is similar to the trademark of another, the court is allowed to presume that the public will be deceived.

Thus, in this case, where the marks are extremely similar and MJ promotional materials made reference to Nirvana songs, it seems inescapably clear that the intent was to trade off the Nirvana brand and create the impression of affiliation, which is prohibited by the Lanham Act and other California state claims brought by Nirvana.