Henry Schein, Inc. v. Archer & White Sales, Inc, a case examining a judicially-created exception to the Federal Arbitration Act, may hold clues to how the Supreme Court will approach patent eligible subject matter going forward. Specifically, the three judicial exceptions to patent eligibility could be found, unanimously, inapplicable at the Court’s next review of the issue. 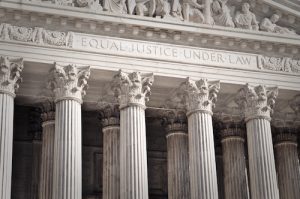 In a unanimous Supreme Court decision dated January 8, Justice Brett Kavanaugh authored an opinion applying a statutory construction principle to the Federal Arbitration Act (FAA) that may foreshadow how the new Court, applying the same principle, will dramatically reshape how federal courts must approach patent eligible subject matter challenges by eliminating the judicial exceptions—abstract ideas, laws of nature and natural phenomenon—and thus moot the debate that has followed (and preceded) the Court’s Alice decision.

In Henry Schein, Inc. v. Archer & White Sales, Inc., Case No. 17-1272, the Court considered the Circuit split over whether the “wholly groundless” exception to an FAA provision requiring the arbitrator to decide issues the parties had agreed to arbitrate could be relied on to permit a district court to determine in the first instance whether a particular dispute was arbitrable, notwithstanding that the parties had agreed arbitrability questions should be decided by the arbitrator. The Court unanimously held that the exception does not apply. The reason is simple. As Justice Kavanaugh explained, acknowledging that the FAA had been adopted by Congress and signed by the President: “The short answer is that the Act contains no [such] exception, and we may not engraft our own exceptions onto the statutory text.” Henry Schein, slip op. at 7. Hammering home this rather unambiguous principle, Justice Kavanagh noted: “Again, we may not rewrite the statute simply to accommodate [a recognized] policy concern.”  Id. at 8.

That noise you just heard was dozens of decades of jurisprudence applying the well-known three judicial exceptions to patent eligible subject matter—abstract ideas, laws of nature, and natural phenomenon—which do not appear in the Patent Act, flying right out the window. The little pop was the judicially created obviousness type double patenting defense following.

Does Henry Schein, reflecting a unanimous Court’s interpretation of a statute, reflect a shift to now interpreting statutes such that exceptions not found in the text cannot be applied? Certainly, such an argument can be made, and one might expect the Court to treat all statutes, including the Patent Act, in the same manner, as the Court has done before, e.g., eBay. In other words, the three judicial exceptions to patent eligibility, which courts at all levels throughout the land have struggled over since their inception—and which the U.S. Patent and Trademark Office has likewise struggled over and addressed with its parade of guidelines, even now being revised—and which nowhere appear in the text of the Patent Act, could be found, unanimously, inapplicable at the Court’s next review of the issue.

Perhaps this will happen sooner that one would normally expect in the slow world of Supreme Court case law. Indeed, this might just explain why the Court on January 7 asked the U.S. Solicitor General to submit an amicus brief in the Berkheimer case, which is currently before the Court on petition for certiorari. Berkheimer frames nicely the issue of patent eligibility and how district courts should handle motions to dismiss patent infringement claims under Section 101 and Alice. Although the issue framed by the cert petition is whether factual questions underlying an application of judicial exception to patent eligibility require the district court to defer ruling on the motion until the factfinder has resolved those issues, e.g., after trial, this just might be the case that the Court employs to make definitively clear that the 101 motions simply should be denied because the judicial exceptions are not found in the Patent Act and thus no longer apply.

It also might explain why, as the IP press has reported, the two senators are meeting with industry groups to discuss potential legislative amendments to Section 101 as an alternative fix to the current patent eligibility jurisprudence. Clearly, under Henry Schein the Court must intend to strike the judicial exceptions to patent eligibility—because they don’t appear in the statute—and it will be up to Congress to tell us what they really mean about what is patentable subject matter, and what is not. Perhaps Congress can, in a bipartisan way, figure out and put in the text any limits on patenting anything under the sun made by man that is a “new and useful process, machine, manufacture, or composition of matter …”  35 U.S.C. §101.

Who would have thought patent eligibility would finally be resolved so clearly, simply, and quickly? Hopefully, Congress will move quickly on that legislative effort to avoid a catastrophe from unintended consequences for our already challenged patent system.

Robert Isackson is a Parter with Leason Ellis. Practicing for over thirty years, Rob Isackson is an accomplished, front-line IP litigator, counselor, and advisor fluent in all aspects of intellectual property: patents, [...see more]