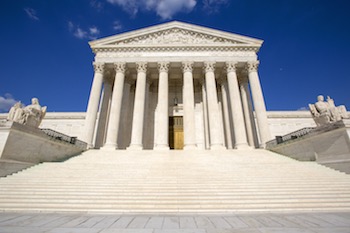 On Monday, December 3rd, the U.S. Supreme Court denied a petition for writ of certiorari in Carl M. Burnett v. Panasonic Corporation, declining to take up the case on appeal from the Court of Appeals for the Federal Circuit. This is now the latest case involving questions of patent-eligibility for an invention under 35 U.S.C. § 101 declined by the nation’s highest court. In this case, however, the Supreme Court hasn’t addressed the patentability of the relevant subject matter, namely electronic data and electromagnetic analog and digital signals, since 1853.

Burnett’s appeal to the Supreme Court followed the Federal Circuit’s decision this July to affirm the District of Maryland’s finding that patent claims asserted by Burnett were invalid under Section 101 for being directed to an abstract idea on a Rule 12(b)(6) motion for failure to state a claim filed by Panasonic. The invalidated claims were claims 1 and 9 of U.S. Patent No. 7107286, titled Integrated Information Processing System for Geospatial Media. The asserted claims covered a geospatial media recorder for encoding geospatial referencing elements onto video frames and a geospatial information processing method for processing visual, audio, textual and geospatial data.

Burnett appealed the district court’s invalidation of the asserted claims, arguing that the asserted claims were patent-eligible, that the district court erred in failing to construe five claim terms which were allegedly disputed and that the court violated Burnett’s due process rights when it failed to hold Rule 12(b)(6) and claim construction hearings. In affirming the lower court, the Federal Circuit panel of Circuit Judges Kathleen O’Malley, Raymond Clevenger and Jimmie Reyna found that, even accepting Burnett’s claim constructions, the claims were still directed to patent-ineligible subject matter and that the district court didn’t need to hold claim construction or Rule 12(b)(6) hearings because Panasonic didn’t dispute Burnett’s proposed constructions and because there was no requirement for a court to hold a hearing on a motion to dismiss.

Although the Alice/Mayo framework is a relatively newer piece of case law used to determine questions of patent-eligibility for computer-implemented methods and other subject matter, the Section 101 eligibility of electronic data and electromagnetic signals hasn’t been revisited by the Supreme Court since its 1853 decision in O’Reilly v. Morse. In that case, the Supreme Court invalidated a claim to a method involving an electromagnetic signal as being so general that it constituted an idea rather than the practical application of an idea. However, a dissent by Justice Robert Cooper Grier posed a question on the statutory patentability of electromagnetic signals and data embedded in those signals, a question answered several times by the Federal Circuit but never by the Supreme Court.

Burnett’s petition also notes that the asserted claims in the case had been submitted for inclusion in industry technical standards set by various organizations. Burnett had filed two patent licensing declarations with the Society of Motion Picture and Television Engineers (SMPTE) and another declaration with the Internet Engineering Task Force (IETF) with both organizations requiring reasonable and non-discriminatory (RAND) terms for the licensing of patented technologies incorporated into standards.

“Given the importance of electronic data in virtually every industry globally and its essential use in electronic commerce worldwide, the Court should have a strong interest in examining this issue,” Burnett’s petition reads. Previous holdings by the Federal Circuit in Burnett and other related cases conflict with scientific facts supporting the idea that electronic data is the tangible embodiment of electromagnetic signals, the petition argues. One of those CAFC cases, In re Nuijten (2007), misinterpreted information from a physics textbook which noted the physical qualities of electromagnetic waves, leading the court to find that electromagnetic signals were instead non-tangible properties.

In Nuijten, the CAFC also adopted problematic legal terminology by saying that the claims-at-issue covered “transitory electrical and electromagnetic signals” despite the fact that signals cannot be transitory, they are either continuous or discrete based on the signal’s type and state. The flawed reasoning in Nuijten was applied by the Federal Circuit in its 2014 decision in Digitech Image Technologies v. Electronics for Imaging, where the appellate court held that electronic data is ethereal and non-tangible despite the physical qualities possessed by the electromagnetic signals in which the data is encoded.

Although a review of appellate cases in Circuit Courts found that challenges to the admissibility of electronic data as evidence was typically due to the fact that such data was obtained as the result of a warrantless search, the Federal Circuit’s rulings create a conflict with how such data is treated by other Circuit Courts. Expanding the applicability of electronic data as non-tangible property affects various areas of law and harms the ability to properly prosecute cybercrimes and digital piracy cases. Further, defense attorneys who do not raise arguments against the admissibility of electronic data evidence could face federal malpractice charges for failing to do so. But in denying Burnett’s petition for writ, it’s pretty clear that the Supreme Court isn’t that concerned about whether electronic data can be used as evidence in any legal proceeding anymore.