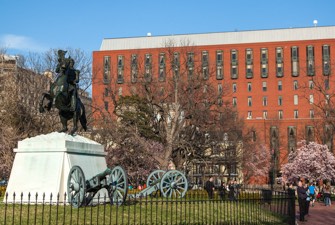 The Federal Circuit recently issued an opinion vacating the District of Delaware’s grant of summary judgment of non-infringement based on collateral estoppel. Specifically, the Federal Circuit held that collateral estoppel did not apply because material differences existed between the accused products in the two actions. The Court remanded for further proceedings. ArcelorMittal Atlantique et Lorraine v. AK Steel Corp., No. 17-1637, 2018 (Fed Cir. Oct. 5, 2018) (Before Reyna, Wallach, and Hughes, Circuit Judges) (Opinion for the court, Reyna, Circuit Judge).

The asserted U.S. Patent No. RE44,940 (the RE940 patent) relates to boron steel sheets that become highly mechanically resistant when hot-stamped—a process in which steel blanks are rapidly heated, inserted into a stamping machine, stamped into a particular shape, and then rapidly cooled. The representative claim 17 of the RE940 patent is a product-by-process claim. The claimed “thermal treatment’” of the steel sheets results in “mechanical resistance in excess of 1500 MPa,” a quality that is highly desirable for auto part production. The RE940 patent is a reissue of US Patent No. 6,296,805 (the ‘805 patent) with nearly identical claims, and both are owned by ArcelorMittal.

In 2010, ArcelorMittal sued AK Steel Corporation (AK Steel) for infringement of the ‘805 patent. The key issue was whether steel sheets produced by AK Steel, referred to as AXN, met the “mechanical resistance of 1500MPa or greater” limitation after thermal treatment. The action resulted in a jury verdict of non-infringement, “in part based on the lack of evidence of the hot-stamped steel sheets meeting the limitation requiring a [UTS] of 1500 MPa.” In 2013, ArcelorMittal filed the present lawsuit, which AK Steel sought to dismiss on the basis of collateral estoppel, arguing that the accused ULTRALUME products were the same as the AXN products in the 2010 action. The district court granted AK Steel’s motion for summary judgment, dismissing the action, and ArcelorMittal appealed.

In its opinion, the Federal Circuit explained that defensive collateral estoppel of non-infringement applies in very limited circumstances where “a close identity exists between the relevant features of the accused device and the device previously determined to be non-infringing such that they are ‘essentially the same.’” Accused products are essentially the same where “the difference between them are merely ‘colorable’ or ‘unrelated to the limitation in the claim of the patent.’” Thus, “[i]f accused devices in a second suit remain ‘unchanged with respect to the corresponding claim limitations at issue in the first suit,’ the patentee is precluded from pursuing its infringement claims a second time.” The burden is on the proponent of claim or issue preclusion to show that the accused products are essentially the same.

Furthermore, Court found that the district court erred by focusing on pre-processed steel in determining whether a material change existed between the accused products. Process terms in product-by-process claims serve as limitations in an infringement analysis. Here, hot-stamping—the claimed thermal treatment process step—was critical to the infringement analysis. Thus, the proper analysis must focus on steel that has undergone the thermal treatment. If third-party hot-stampers produced steel sheets that met the claimed limitation, with a UTS exceeding 1500 MPa after thermal treatment, the hot-stampers directly infringed the RE940 patent.

Additionally, the Court held that because evidence of material differences in the accused products exited, the district court also erred in limiting discovery based on issues presented in the 2010 action. On remand, the district court is to allow ArcelorMittal to conduct discovery in its opposition to AK Steel’s motion for summary judgment.