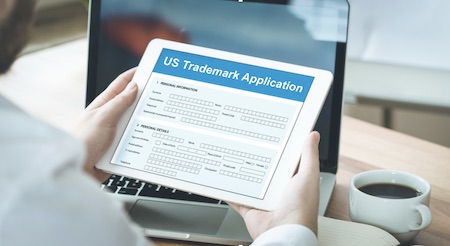 Here’s a breakdown of the foreign applicants: 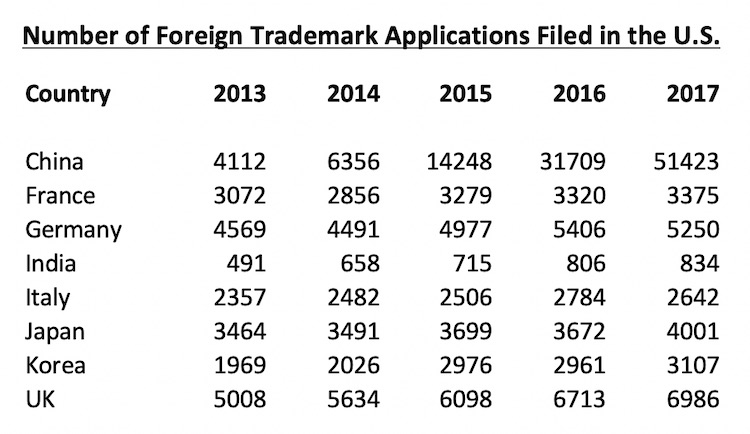 Registering trademarks is one of the first steps forward-looking foreign companies take to build, market and protect their brands and products. But many of these applications are being filed by individuals, small businesses, and entrepreneurs who are cautious about expenses, anxious to get to market quickly, and tempted by low-cost online filing services that are, in actuality, a poor choice. These online filing services can result in rejected applications, forcing companies either to refile their applications with the help of experienced U.S. trademark lawyers or simply forego establishing their trademarks rights in the U.S. the largest market in the world for most products and services.

However, while many of these trademark applications will undoubtedly be invalid, there may be solid brands behind them, and it’s only a matter of time before they’re able to compete effectively in the U.S.

With growing international awareness of the increasingly complicated U.S. trademark registration process, we expect to see a larger percentage of better applications going forward and increased approval rates. Foreign applicants are realizing that they need to retain experienced U.S. attorneys to properly protect their trademark rights. And soon, that may become the only option. The USPTO is currently working on a new rule that could go into effect as soon as next year that requires the use of licensed U.S. attorneys for filing trademark applications.

As foreign applicants seek to enter the marketplace, U.S. companies will need to be on the lookout for applications that infringe upon their existing brands. Given the large influx of applications in an already crowded trademark register, there’s a growing risk of collision between two confusingly similar marks, and the chance that a confusingly similar mark slips past the a USPTO Attorney Examiner. The increase in filings also has made it more difficult for U.S. companies to register their own trademarks and challenge those registered by foreign companies.

U.S. companies here at home will need to prepare themselves for the competition. At the outset, that preparation should start with increasing trademark vigilance efforts.

Larger sophisticated companies are usually already taking appropriate steps to protect their brands. One measure is subscribing to relatively inexpensive “watching services.” These services constantly monitor and flag applications that may infringe on existing trademarks, allowing the company to proactively challenge them.

Smaller companies that market branded merchandise, on the other hand, may not have those resources or know they even exist. They, too, need “watching services” to reduce their exposure – but preferably ones designed for the needs of entrepreneurs and smaller companies. Such businesses also may not be familiar with the available procedures for preventing the registration of conflicting trademarks at the USPTO, unless they have help from outside counsel. Procedures include: filing Letters of Protest, submitted confidentially to the USPTO, for it to consider; initiating formal opposition proceedings on the ground that the applicant does not have the right to register because of a perceived likelihood of confusion; and, commencing a cancellation proceeding after an application has matured in a registration.

It is important for U.S. companies to recognize that the increases in trademark filings in general and by foreign companies, in particular, signify future stiff competition in the marketplace and potentially serious threats to existing trademarks. If they aren’t already, it won’t be long before these companies are effectively competing with U.S. companies and others selling their products in the United States. Properly protecting trademark rights is crucial for all parties involved.