“I think that we can overcome the current Section 101 morass if we carefully follow Supreme Court precedent, if we don’t allow the judicial exceptions to swallow the entire statute,” Director Iancu explained. 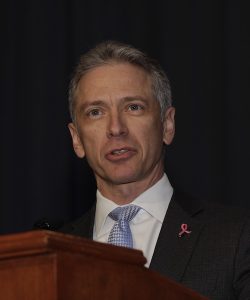 Earlier this week, on Monday, November 26, 2018, Andrei Iancu, Under Secretary of Commerce for Intellectual Property and Director of the United States Patent and Trademark Office, delivered remarks to the 10th Annual Patent law & Policy Conference at Georgetown University law School. In his remarks Director Iancu again said what he has been saying for some time — the USPTO is working on fresh guidance relating to patent eligibility for computer implemented innovations (i.e., software related inventions). Director Iancu’s remarks gave a first look at what his reforms will look like, and by all indications these changes will be extremely innovator friendly.

To date the United States Supreme Court has decided four patent eligibility cases in the latest, or modern round, of decisions shaping this area of the law. To pull no punches, everyone in the industry who is being at all objective knows that the quartet of cases — Bilski, Mayo, Myriad and Alice — have created chaos. Whether one likes the fact that less is patent eligible in America, or that it is now easy to win at the motion to dismiss stage in a patent infringement law suit in Federal District Court, the undeniable reality is the test that has evolved, the so-called Alice/Mayo framework is unworkable, untenable and illogical. It allows the decision maker to reach whatever preconceived notion the decision maker already had about the subject prior to coming to the unique facts and circumstances of the case. There is no predictability; uncertainty reigns supreme.

For reasons that remain unclear and difficult to explain, the United States Court of Appeals of the Federal Circuit has collectively abdicated its single responsibility — to bring certainty, stability and predictability to patent law. In fact, the Federal Circuit has been chiefly responsible for the extraordinary unpredictability of the Alice/Mayo framework. Indeed, the outcome of cases is entirely dependent upon the three-judge panel drawn by the patent owner, which speaks to a Court that is hopelessly fractured and incapable of delivering on its sole objective.

In decades past, the Federal Circuit would read Supreme Court decisions and recognize that the statements made by the Supreme Court were made in context. For example, no one in the industry has ever defended the patentability of the claims at issue in Mayo, but rather the question was whether it was appropriate to say that those claims should have been invalidated as being patent ineligible. That means those claims were poorly written (i.e., bad claims) that rather clearly overlapped with the prior art. Mayo was an exception, not a rule that should have swallowed the entire medical diagnostics industry in America. Similarly, Bilski related to a mental method, nothing more. Alice related to balance sheets, which the Supreme Court likened to a checkbook register. Simple inventions in context, statements made in context. Not statements that should have been interpreted by any rational person to swallow entire industries whole.

Thankfully, Director Iancu understands that what the Supreme Court has actually said is quite limited. What has made the quartet of patent eligibility cases so devastating is how they have been stretched and pulled, twisted and manipulated to invalidate (and prevent) patent claims on innovations of entirely different magnitudes than those contemplated by the Supreme Court.

Director Iancu proposes that the USPTO strictly follow the Supreme Court, and nothing more. He explained in his remarks:

But what exactly are these prohibited “abstract ideas”?

After detailed studies of all relevant cases, and based on our extensive experience at the USPTO, it appears to us that “abstract ideas” can be synthesized to fall into the following three categories:

Specifying the prohibited categories is important at least for the sake of predictability, so that the public can invent, invest, and transact business with increased confidence.

Then he would go on to say:

In short, I think that we can overcome the current Section 101 morass if we carefully follow Supreme Court precedent, if we don’t allow the judicial exceptions to swallow the entire statute, and if we allow the rest of the statutes (102, 103, 112) to do the work they were meant to do.

So we at the USPTO are preparing revised guidance along these lines. In particular, our guidance will categorize the judicial exceptions, and clearly instruct examiners on how to apply them.

Under the first step of the proposed guidance, examiners would first look to see if the claims fall within the four statutory categories: process, machine, manufacture, or composition of matter. (This is not new—we always do this.)

This is a sensible approach that is long overdue.