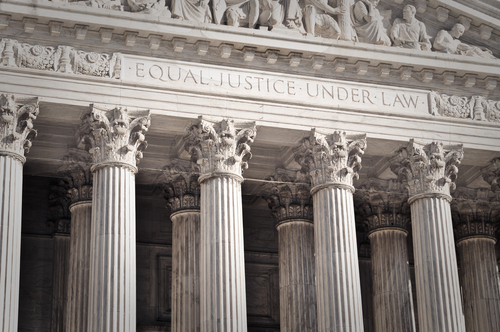 On Monday, November 5th, the U.S. Supreme Court denied a petition asking the Court to take up Real Estate Alliance Ltd. v. Move, Inc., et. al. on appeal from the Court of Appeals for the Federal Circuit. The case becomes just another example in a long line of patent appeals involving questions of patent eligibility the Supreme Court has decided to sidestep instead of offering clarity for what some believe has become an unintelligible test for patent eligibility.

In its petition for writ, Real Estate Alliance (REAL) had asked the Supreme Court to take up the question of whether an ordered combination of elements in a patent claim is “well-understood, routine and conventional” to a skilled artisan in the relevant field under Alice step two a question of fact. Guidance on this issue from the Supreme Court would have been helpful as some Federal Circuit judges have found that this Section 101 analysis is a purely a question of law, while others have found that it is a question of law that requires fact-finding.

The patents-at-issue in this case cover inventions in the early 1980s by Mark Tornetta, who developed a way to take real estate information from multiple listing systems and, using his personal computer, created a new and useful way of locating available properties in the databases with the use of maps showing areas of interest to potential buyers. At the time of Tornetta’s invention, conventional multiple listing services allowed real estate professionals to search databases by an index number or property characteristics, providing results as text-based lists and requiring searches of different databases for each county.

This particular case stems back to 2007 when Move filed a complaint for declaratory judgment in the Central District of California; Move was seeking a declaration that both U.S. Patent No. 5032989 and U.S. Patent No. 4870576, both titled Real Estate Search and Location System and Method, were invalid and not infringed by Move’s websites such as realtor.com. REAL then sued Move and the other defendants for patent infringement. The case was appealed twice to the Federal Circuit, which remanded back to the district court which granted a motion to invalidate the ‘989 patent under Section 101 after a motion filed by Move. The summary judgment filed by the court explicitly stated that “we do not decide” whether the ‘576 is invalid but, after REAL joined a status report filed with defendants believing that it was preserving its claims to infringement of the ‘576 patent, the district court entered a judgment that both of the patents were invalid under Section 101. A fourth appeal to the Federal Circuit resulted in an affirmation of the lower court’s invalidation of the asserted patents.

REAL argued in its petition that step two of the Alice test used to determine invalidity under Section 101 requires questions of fact that were never asked by the district court. To invalidate without asking those questions contradicts the Federal Circuit’s recent holdings in Berkheimer v. HP and Aatrix Software v. Green Shades Software. REAL’s appeal to the Federal Circuit was decided by a panel including Circuit Judges Alan Lourie, Evan Wallach and Kara Stoll, a trio where the majority has held that step two of Alice is a pure question of law, which is a misapplication of the Alice standard. REAL further contended that both the district court and the Federal Circuit disregarded the factual record in their Alice analysis; that the patents-in-suit claim patentable improvements to computer user interface technology; and that the district court found that there were material facts in dispute while also finding that the claims were well-understood, routine and conventional.

REAL also argued that the record lacked any findings sufficient to invalidate the ‘576 patent, which was never analyzed under Alice but was simply invalidated pursuant to REAL’s decision to join the status report submitted to the district court. This stripped REAL of valuable patent rights without affording any due process to REAL. “It strains credulity that REAL would, or could have knowingly conceded invalidity, and waived infringement claims that it had pursued for more than eleven years, without addressing the many issues attending summary invalidation of the earlier of its patents,” the petition reads.