“Clarity and predictability are essential to foster innovation and to allow inventors and investors to reasonably rely on the patent grant,” Iancu told PPAC earlier today. 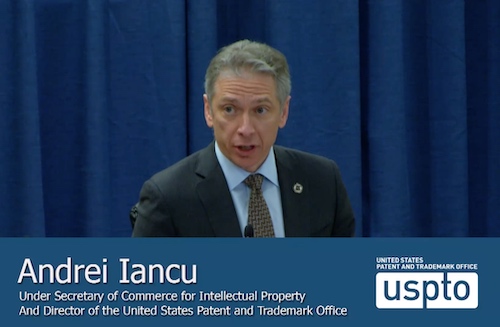 Earlier this morning Andrei Iancu, Director of the United States Patent and Trademark Office (USPTO), gave opening remarks to the quarterly meeting of the Patent Public Advisory Committee (PPAC). He began his remarks by announcing that Commerce Secretary Wilburn Ross had appointed Laura Peters to become the Deputy Director of the USPTO, and that she will start on Tuesday, November 13, 2018. Iancu publicly thanked Tony Scardino, who has been Acting Deputy Director during the transition period. Scardino will now resume his role as Chief Financial Officer at the USPTO.

PPAC meetings are an opportunity to bring members of this Advisory Committee, and the public, up to speed with what the Office has been working on over the previous quarter. Thus, Director Iancu did not make much, if any, news speaking at PPAC today. He did, however, indicate that at least for now his major initiatives to reform the Patent Trial and Appeal Board (PTAB) have been rolled out, albeit with the last phase still in proposed rule form. Director Iancu indicated that he believes it is necessary now to carefully assess the implementation of these PTAB reforms and consider stakeholder reaction to the changes.

Director Iancu began his substantive remarks by telling the Committee that on October 31, 2018, President Trump signed the Study of Underrepresented Classes Chasing Engineering and Science Success (SUCCESS) Act, which in addition to being “aimed at promoting innovation for women and minorities in engineering and science” also extends USPTO fee setting authority to 2026, “which obviously is very important for our operations,”Iancu explained.

The theme of Iancu’s remaining remarks were how the Office is “working diligently toward greater predictability in the patenting process.” In chronological order, Director Iancu discussed the following:

Iancu on the PTAB

“The various changes we have implemented plus the amendment process we have proposed and will follow up on follow the goals I outlined several months ago when I first came to the PTO, so we now need to assess carefully the implementation and stakeholder reaction to these new changes. The overall goal is to take a holistic approach for the PTO, obviously, but just in general for the patent system in the United States, and fully implement the intent of the AIA and achieve balance in the system.

So, in general we want to increase predictability, increase transparence and achieve a well-balanced process that is fair to all. So, with that in mind, we want to take some time now to see what the reaction is to the various changes monitor them very carefully and make sure the system is stable and stabilized and we do achieve the needed certainty and predictably. So, in terms of major initiatives, those were the ones we have worked on. And For now, we need to now see how those get implemented.

Finally, on the PTAB, as you probably know, we are in the process of hiring a new Chief Judge. The application timeframe is now closed, and we are reviewing the various applications we have received. My understanding is we have received quite a few applications from highly qualified individuals, both internal to the PTO and from outside.”

“Another area we are trying to provide increased clarity on is patentable subject matter eligibility under 101. To this end we have been providing guidance to the examiners in the past few months, but we do know more guidance is needed. So, in April we issued what has become known as the Berkheimermemo, which addresses Step 2 of the Alice/Mayo test. Specifically, this explained to examiners how to support and document their determinations of what is deemed to be conventional under the Supreme Court test. Then in June we issued further guidance with respect to method of treatment claims, the so-called Vandamemo. This explained to examiners that method of treatment claims may be patent eligible if they are directed to a practical application of a natural relationship.

We continue to strive to create consistency and increased clarity through the guidance, and we are looking to issue and working on new guidance in the next few months to address the rest of the Alice/Mayotest. In a speech at the IPO annual meeting I outlined the various considerations for the new guidance we are working on right now. So, generally speaking at a high level, we want to synthesize the various court cases to identify categories of ineligible matter we will then consider a practical application of such matter eligible.

Clarity and predictability are essential to foster innovation and to allow inventors and investors to reasonably rely on the patent grant. I do believe the new guidance that we are working on would achieve those goals.”

Iancu on Search and IT Systems

“We are also focusing our efforts on improving the initial search and the availability of the best prior art to our examiners. This aspect takes a variety of forms, and we are working on it from a whole host of different ways. But overall, presenting more comprehensive prior art to the examiners up front will lead to more efficient examination, decrease in the information gap between the examination phase and the later challenge or litigation phases during the life of a patent and increase the reliability of the patent grant overall. This can go a long way towards improving the quality of the initial examination. We have been working with a number of industry groups, such as Cisco and MIT, with respect to a new prior art archive they have established. We are also working internally on a whole variety of initiatives to improve the search for prior art, including increased training, increased collaboration and improved tools for search. To that end we are also working diligently on potential artificial intelligence tools for the search aspect of the examination. All of this is a long-term project, a long-term goal, but rest assured we are working very diligently on that. It is a high priority for the PTO and our attention to the quality of the grant.

Speaking of artificial intelligence and our IT systems in general, we are well aware of the recent IT challenges that our customers have encountered, such as the PALM outage in August… Our legacy systems are old, and it is time, it is indeed well beyond time frankly, to undertake a fundamental modernization effort. We are doing so. To this end, we are conducting a wholesale review of all of our technology resources and are in the process of changing over our oldest infrastructure. Consequently, we are taking a broad, fresh look at our IT systems top to bottom. We have assembled a task force of USPTO leaders and are also working with outside consultants to tackle this issue head on as quickly as possible. No options are off the table when it comes to the modernization of these vital IT systems and we are working on this right now as we speak. We have a unique opportunity, in my view, to fundamentally transform our IT systems and transition to state-of-the-art technology.

We also continue to work on releasing our next gen systems, such as Patent Center, which will modernize our transaction systems by combining EFS Web and PAIR in a single interface.

Finally, we have just released a new, redesigned homepage for USPTO.gov.”