Trademark Application filed for ‘FitzMagic’, but not by QB Ryan Fitzpatrick 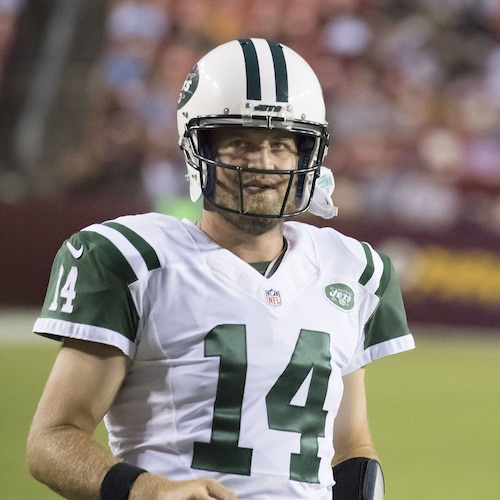 During the first three weeks of the 2018 National Football League season, journeyman quarterback Ryan Fitzpatrick has been having a string of games in which he has shown the kind of explosive offensive performance that has earned him the nickname “FitzMagic.” Currently the starting quarterback for the Tampa Bay Buccaneers, his seventh NFL team, Fitzpatrick has a 70.3 percentage of completed passes through three games, throwing for 11 touchdowns and attaining an average QB rating of 124.8 thus far through the season. He is the first quarterback in NFL history to throw for more than 400 yards in three consecutive games.

Although Ryan Fitzpatrick’s “FitzMagic” moniker has been earned over the course of playing in 13 different NFL seasons since he was drafted in 2005, a player who is much newer to the league has taken steps to trademark that nickname as his own. Minkah Fitzpatrick, a safety for the Miami Dolphins who was selected in the first round of the 2018 NFL Draft, filed U.S. Trademark Application No. 88113690 to protect the use of the standard character mark “FitzMagic” on clothing including tops, bottoms, footwear, hats and headwear.

According to Lorri Lomnitzer, attorney and founder of The Lomnitzer Law Firm P.A., this recent news is part of an increasing trend among professional athletes to trademark their own nicknames or catchphrases at the U.S. Patent and Trademark Office. “Athletes can license these names to third parties to produce additional income during their years as a professional athlete and can even continue doing so after retiring from sports if they’re famous enough,” she said. “Athletes have a limited time to play in their respective sports, so they’ll want to exhaust all of their available resources to capitalize on their nickname or slogan during that time period.” Lomnitzer, an intellectual property attorney who has experience litigating trademark law, has also represented professional football, boxing, and other athletes. She noted that professional athletes who have successfully monetized trademarks based on nicknames or personal slogans include Marshawn Lynch, Aaron Rodgers and Michael Strahan.

If the trademark application filed by Minkah Fitzpatrick is successfully registered, it could be the case that he may get personally involved in the business of selling merchandise using the mark. “Both the Internet and the increasing use of social media makes it a lot easier for professional athletes to sell merchandise themselves,” Lomnitzer said. Of course, such a business venture would take up a considerable amount of time and money so licensing the trademark to a third party would be a less restrictive way to monetize the trademark. Lomnitzer notes that the trademark application filed by Minkah Fitzpatrick is an intent-to-use application and so Minkah could only begin to capitalize on the mark once it was actually registered.

The growing trend among professional athletes to register marks based on nicknames or slogans has also resulted in many sports teams adjusting the language of their player contracts to allow them to sell merchandise bearing the nicknames of players. If the contract between the Miami Dolphins and Minkah Fitzpatrick doesn’t include such language, it could likely be the case that the Dolphins would have to license the FitzMagic mark from Minkah once it’s registered in order to sell related merchandise. “Professional athletes need to pay attention to their contracts and look out for such provisions,” Lomnitzer said.

However, Minkah might have issues registering the FitzMagic trademark precisely because that term has been so closely associated with Ryan Fitzpatrick over the course of the latter’s career. “The trademark application may never get to the point of publication if the USPTO’s examiner determines that the applied-for mark consists of or includes the name of a particular living individual whose written consent to register the mark is not of record or that the mark is a close approximation of a name or identity used by another person,” Lomnitzer said. “In both cases, that would be Ryan Fitzpatrick.” If the mark is published, Lomnitzer added that Ryan would stand a good chance of preventing the registration of the mark by opposing the mark at the USPTO by alleging consumer confusion on the grounds of either diluting his own famous mark or the false suggestion of a connection with him.

Whether Ryan Fitzpatrick opposes or otherwise challenges Minkah Fitzpatrick’s registration of FitzMagic, one has to question the wisdom of seeking a trademark that NFL fans will associate with someone other than the trademark owner. “That defeats the entire point of a trademark,” said Gene Quinn, founder of IPWatchdog.com. “Trademarks are supposed to set you apart and specifically identify the source, this just seems guaranteed to cause confusion if the USPTO issues the trademark. Not a smart business move.”