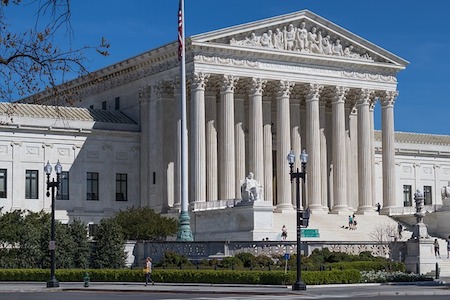 In early August, patent owner Smartflash filed a petition for a writ of certiorari with the U.S. Supreme Court to appeal a case stemming from covered business method (CBM) review proceedings carried out at the Patent Trial and Appeal Board (PTAB). Smartflash is asking the Supreme Court to decide whether PTAB administrative patent judges (APJs) are principal officers of the United States who are subject to the terms of the Appointment Clause, whether CBM review of patents disclosed prior to passage of the America Invents Act (AIA) violates the Fifth Amendment’s Due Process Clause, and whether undisputed evidence that an invention is not unduly preemptive is relevant to answer questions of patent eligibility under 35 U.S.C. § 101.

At issue in this petition are a total of 30 CBM reviews petitioned by Apple, Samsung and Google against Smartflash, which were instituted by APJ panels at the PTAB. Although the APJ panels in these cases found that petitioners did not establish a likelihood that Smartflash’s patent claims were invalid under on 35 U.S.C. § 102 grounds for novelty or 35 U.S.C. § 103 grounds for obviousness, they did find a likelihood that the patent claims were invalid on Section 101 grounds for being directed to patent-ineligible subject matter. In the CBM reviews, the PTAB panels applied the two-part Alice test to determine first that the claims were directed to the abstract idea of conditioning and controlling access to content based upon payment, and then second that the additional elements of the claims did not contain an inventive step, thus rendering the claims invalid under Section 101. Smartflash appealed the PTAB’s final written decisions and the Federal Circuit issued a Rule 36 affirmance upholding the PTAB’s decisions without an opinion.

In its petition for writ, Smartflash argues that the authority vested in APJs to invalidate issued patents without review by any other Executive Branch employee renders APJs as principal officers of the U.S. government. As principal officers, and thus subject to the Appointments Clause, Smartflash argues that APJs must be appointed by the President and confirmed by the U.S. Senate. Various aspects of the APJ position points to their role as officers of the U.S. and not mere employees of the federal government including their career positions created by statute, their presiding over adversarial trial-type proceedings and their power to sanction parties for misconduct.

Smartflash’s petition raises the subject of panel stacking in the context of discussing the mechanisms which the U.S. Patent and Trademark Director has to influence the outcome of PTAB proceedings. The stacking of APJ panels to achieve policy outcomes desired by the USPTO Director was admitted by counsel representing the USPTO before the Federal Circuit back in 2015. “Ignoring for the moment the serious due process questions [panel stacking] raises,” Smartflash notes that the authority to designate APJs to panels is not the kind of authority that would characterize APJs as officers inferior to the director. Supreme Court precedent from Freytag v. Commissioner (1991) and Lucia v. Securities and Exchange Commission (2018) compel the conclusion that APJs are officers of the United States.

Although Smartflash’s petition for writ does not raise this issue, the assignment of APJs in its CBM review cases raises serious questions of ethics, not just constitutionality. As we reported last April, one of the APJs assigned to multiple CBM review panels petitioned by Apple to challenge Smartflash’s patents had a previous work relationship with Apple and counsel representing Apple which would have necessitated that judge to recuse himself if he were a judge deciding the case in an Article III district court.

Smartflash also argues that the Supreme Court should also take up this case to determine if CBM reviews retroactively applied to patents filed prior to the AIA, which enacted the PTAB and CBM review, violates the Due Process Clause of the Fifth Amendment. This was a grounds for challenging the constitutionality of the PTAB that was expressly left open by the Court’s decision earlier this year in Oil States v. Greene’s Energy Group. “Subjecting Smartflash’s patents to a new form of agency review impairs the value of Smartflash’s property in a way that is fundamentally unfair,” the petition reads. At the time that Smartflash applied for its patents, the only procedures in place at the USPTO to challenge the validity of those patents were ex parte examination and inter partes reexamination. CBM review carries a much higher risk of invalidation than those other two procedures and thus substantially reduces the value of patents. Apple challenged the validity of Smartflash’s patents multiple times on Section 101 grounds during the district court litigation but didn’t prevail, leading to a $532 million verdict for Smartflash. Without the AIA and CBM review, the only way that Apple would have been able to continue its challenge on Section 101 grounds would have been appeal to the Federal Circuit; Section 101 grounds can’t be raised in a reexamination.

Finally, Smartflash argues that the PTAB’s application of the Alice test to determine patent validity under Section 101 erred in failing to consider evidence that Smartflash’s patents didn’t tie up building blocks of future innovation. “On the contrary, respondents’ experts repeatedly admitted that there are a variety of ways to implement the alleged abstract idea of conditioning and controlling access to content based on payment,” the petition reads. Citing to the Supreme Court’s 2014 decision in Alice Corp. v. CLS Bank International, Smartflash notes that the Alice inquiry “is aimed at ensuring that a patent will not ‘’inhibit further discovery by improperly tying up the future use of’ the[] building blocks of human ingenuity.’” While the Federal Circuit has applied the framework in a way that rejects the need to show undue preemption to find invalidity under Section 101, possibly due to an application of precedence set in Mayo Collaborative Services v. Prometheus Laboratories (2012) holding that federal courts are not well-suited to make the determination that an invention is unduly preemptive, such a rationale shouldn’t hold sway at the PTAB where APJs are hired in large part because of their scientific knowledge.

Apple and Samsung jointly filed a brief in opposition of Smartflash’s petition for writ which begins by stating that, although Smartflash owns patents covering methods, systems and devices for controlling access to data based on payment, “Smartflash does not practice these patents or make any products.” Conveniently, this statement ignores the fact that Smartflash inventor Patrick Racz did attempt to commercialize his technology before his technology was stolen by a European electronics design firm whose head of R&D was later hired by Apple to support the company’s digital rights management (DRM) development. Apple’s focus on Smartflash’s business model has encouraged the court of public opinion to tar Smartflash as a patent troll and it’s worth noting that the district court granted a motion in limine filed by Smartflash which precluded Apple from making any argument or providing testimony that “Smartflash [is] a shell company” or from making “any insinuation that any… aspects of Smartflash’s corporate structure are suspicious or improper.”