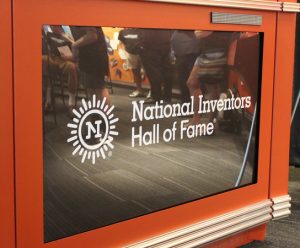 Organic light-emitting diodes (OLEDs) are semiconductor films composed of an organic compound having electroluminescent properties which utilize an electrical current to emit light. The technology has wide applications and has been incorporated into digital displays for mobile phones, automotive dashboards and television screens. OLEDs can be constructed to be thinner and lighter than liquid crystal displays (LCDs) and also provide better black levels and higher contrast ratios than LCDs. In the first quarter of 2018, more than 90 percent of OLED display revenues came from the sale of smartphones according to the online statistics portal Statista. A recent market research report from Markets and Markets predicts that the global market for OLEDs will increase by a compound annual growth rate of 15.2 percent between 2017 and 2023, when that market is expected to reach $48.81 billion in value. 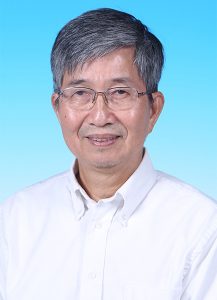 This September 3rd marks the 33rd anniversary of the issue of a seminal patent covering the field of OLED technology for which its inventors have been inducted into the National Inventors Hall of Fame. While working at Eastman Kodak in Rochester, NY, chemists Ching Wan Tang and Steven Van Slyke pioneered the first practical OLED application, paving the way for a new generation of display technologies. With this anniversary now upon us, we return again to our Evolution of Technology series to explore the ground-breaking work of these inventors.

Research regarding the ability of organic compounds to emit light in response to electrical currents goes back to at least the 1950s when scientists at France’s Nancy-Université, led by the French chemist André Bernanose, published research regarding the first observations of electroluminescence in organic materials. The group used acridine orange, an organic compound which is used as a fluorescent dye for certain medical procedures, deposited on a thin film which gave off light when a flow of electrons was applied to the film. 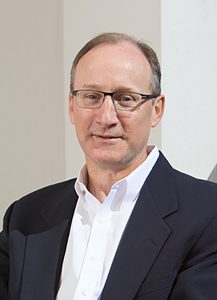 The development of electrode contacts on organic materials for charge injection, a major feature of modern OLEDs, were developed in the 1960s by a team of researchers at New York University led by American physical chemist Martin Pope. Using anthracene crystals, Pope and the NYU researchers were also able to prove the electroluminescence of organic materials in the absence of an external electrical field using thermal forces. Further developments in vacuum processing methods and improved methods for the purification of organic dye molecules through the 1970s and ‘80s set the stage for the development of OLED devices which could operate at significantly lower voltage levels.

Born in Hong Kong, Tang moved to Canada after finishing secondary school and obtained his bachelor’s degree in chemistry from the University of British Columbia. He then obtained his doctorate in physical chemistry from Cornell University in New York and joined Eastman Kodak as a research scientist in 1975. In his early days at Kodak, Tang developed a technology known as the organic heterojunction, a bilayer structure which incorporates the use of an electron donor and an electron acceptor, which served as the basis for the modern OLED and also has been used in photovoltaic solar cells. 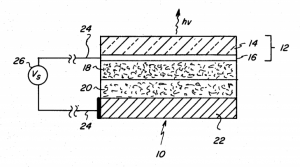 Tang’s work resulted in the issue of U.S. Patent No. 4356429, titled Organic Electroluminescent Cell and the patent for which Tang was inducted into the National Inventors Hall of Fame. Issued on October 26th, 1982, it covers an improvement in an electroluminescent cell comprising a hole-injecting zone comprising a layer of a porphyrinic compound between a luminescent zone and an anode electrode; the cell also includes a cathode electrode. The resulting invention overcame issues with the use of polymeric binders on thin film substrates. The binders are useful in obtaining a coating of luminescent agents on a film without forming pinholes but they also ask as an insulating force the injection of holes and electrodes from metallic electrodes. The use of the porphyrinic compounds overcomes the resistance in the binder, allowing the use of conventional materials for the anode and cathode electrodes. 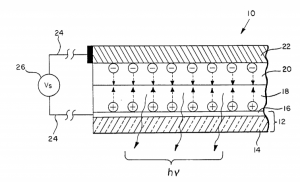 Van Slyke joined Kodak in 1979 after receiving his bachelor degree in chemistry from Ithaca College and his master’s degree in materials science from the Rochester Institute of Technology. He quickly began working with Tang to advance Kodak’s OLED technology research and on September 3rd, 1985, the U.S. Patent and Trademark Office issued U.S. Patent No. 4539507, titled Organic Electroluminescent Devices Having Improved Power Conversion Efficiencies. Listing Van Slyke as lead inventor, it claimed an improvement in an electroluminescent device having an anode electrode, a hole-injecting zone, an organic luminescent zone and a cathode electrode, all in sequence, where the luminescent zone comprises an electron-transporting compound providing a maximum electroluminescent quantum efficiency and one of the electrodes is capable of transmitting at least 80 percent of its radiation at wavelengths longer than 400 nanometers. The invention results in an electroluminescent device that has its power conversion efficiency improved by an order of magnitude while also realizing the thin film format and reduced driving voltages.

Tang and Van Slyke’s OLED technology was first commercialized in the late 1990s when the electronics manufacturer Pioneer released a display for car stereos that utilized an OLED thin-film screen in 1997. By 2003, Kodak had come out with its first device which used OLED technology: the Kodak EasyShare LS633 digital camera. Many consumers’ first introduction to OLED screens was in high-definition television sets and Sony brought the first OLED TV display to the consumer market in 2008. Other companies that have released products incorporating OLED screens in their display include Apple, Google, Facebook, Motorola, HP, Panasonic, Konica and Huawei.

Both Tang and Van Slyke would go on to have very productive careers, with Tang being named on 84 U.S. patents and Van Slyke holding 40 U.S. patents related to OLED technology and device architecture. In 2000, both inventors received the Eastman Innovation Award, the highest honor bestowed by Eastman Kodak upon any of its employees. In 2004, Tang and Van Slyke were also named as winners of the American Chemical Society Award for Team Innovation. Currently, Tang serves as the Doris Johns Cherry Professor in the University of Rochester’s Chemical Engineering Department while Van Slyke works as the Chief Technology Officer at electronic component manufacturer Kateeva Inc.