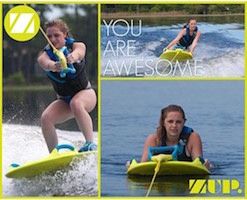 ZUP and Nash are competitors in the water recreation device industry.  ZUP sells the “ZUP Board,” which is covered by the patent-at-issue. The product is designed to assist riders who have difficulty transitioning out of the water into a standing position while being towed by a motorboat.

Prior to their dispute, ZUP and Nash discussed a potential joint manufacturing venture for the ZUP Board. Nash signed a confidentiality agreement. After negotiations fell through, Nash began selling the accused product.

On appeal, the Court reviewed whether a person of ordinary skill in the art (POSA) would have been motivated to combine the prior art references in the way recited by the claims and whether the district court properly evaluated ZUP’s evidence of secondary considerations.

Regarding motivation to combine, the Court noted that the district court found all elements of the claimed invention to exist in the prior art and that the patent-at-issue merely identified known elements in the prior art that aid in rider stability and simply combined them in a single apparatus and method.  Further, the district court found that motivation to combine would have stemmed from a desire “to aid in rider stability, to allow a wide variety of users to enjoy the device, and to aid users in maneuvering between positions on a water board,” all of which are driving forces throughout the prior art.

Despite ZUP’s argument that a POSA would have been focused on achieving rider stability in a predetermined position rather than transitioning between positions, the Court found that “[h]elping riders switch between riding positions had long been a goal of the prior art,” and the only evidence to the contrary was the testimony of ZUP’s expert.  Accordingly, the Court affirmed the district court’s opinion, finding no genuine dispute as to the existence of a motivation to combine.

Regarding the analysis of secondary considerations, the Court found that “ZUP’s minimal evidence of secondary considerations does not create a genuine dispute of fact.”  On appeal, ZUP focused on two considerations: long-felt but unresolved need and commercial success.  The Court found that because the differences between the prior art and the claimed invention are minimal, it cannot be said that any long-felt need was unsolved.  Further, the Court found that prior art devices also achieved the goal of helping users maneuver between positions on a water recreational board.  As to copying, the Court noted that, for Nash’s board to resemble the claimed invention, a user would need to ignore Nash’s instructions on how to use the boards—instructions specifically discouraging users from keeping handles attached to the board while standing.

In her view, the prior art provides no suggestion to make the specific modifications made by the patent-at-issue, and the only source of those modifications is judicial hindsight.  Judge Newman would have found that the patent at issue’s “realignment of known elements in a crowded field, achieving benefits not previously achieved, weighs against obviousness,” and “[o]n the proper analysis, summary judgment of obvious was improperly granted.”

Prior art references aiming to overcome problems similar to those addressed by a patent can support a motivation to combine invalidating references, and for evidence of a long-felt but unresolved to be considered, the long-felt need must be solved by an invention that is more than minimally different from the prior art.