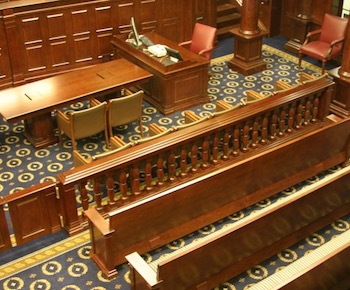 The patent related to an “attention manager” for a “display device,” which could make use of “unused capacity” by showing content in unused portions of the display. The “attention manager” could display secondary content in an area not covered with primary content, or when the “display device” was turned on, but not actively engaged by a user (e.g. a computer wallpaper).

Under Alice Corp. v. CLS Bank Int’l, courts evaluate claims under a two-part test for patent eligibility. 134 S. Ct. 2347 (2014). Step one of the Alice test considers whether the claims, when considered in their entirety, are “directed to” a judicial exception to patent eligibility under § 101. The judicial exceptions are laws of nature, natural phenomena, and abstract ideas. If the claims are directed to a judicial exception, the court must move to step two, which considers whether the claims contain an “inventive concept sufficient to transform the nature of the claim[s] into a patent-eligible application.”

The Federal Circuit affirmed the district court’s judgment. Under Alice step one, the Court noted that the claims were directed to “providing information to a person without interfering with the person’s primary activity,” which is an abstract idea. This idea was longstanding in society, exemplified by a breaking news ticker across the bottom of a television screen or passing a note to someone in a meeting. The Court further found that the “attention manager” encompassed a patent-ineligible abstract concept because it “demand[ed] the production of [the] desired result” of solving problems related to displaying information in “multitasking operation systems,” but did not explain how the result was achieved or place “any limitation on how to produce that result” beyond the use of general computer functions.

The Court proceeded to an analysis under Alice step two and found that the claims did not transform their abstract idea into a patent-eligible application. The claims did not recite an inventive method for how secondary information would be displayed on a device, “such as what portion of the screen is utilized or how the primary activity on the screen is monitored”. Additionally, the claims were so broad that they “encompass[ed] the basic concept of displaying two sets of information.” Therefore, the claims were directed to abstract, patent-ineligible subject matter.

In dissent, Judge Plager criticized the “abstract idea” framework under Alice. He argued first that the concept of an “abstract idea” is extremely difficult to apply in patent cases because the term is by definition “abstract,” meaning “difficult to understand,” and an “idea,” which is “something that lives in the interstices of someone’s brain, a psychophysiological area not fully understood to this day.” Judge Plager also noted that ideas can have an “infinite range of abstractness,” comparing the more concrete idea of “let’s have hamburgers for dinner” with the highly theoretical idea of making “time go backwards.”

Judge Plager went on to state that the “abstract idea” definition, “when used for denying a claimed invention’s patent eligibility . . . cannot thus function as a rule of law.” He proffered that rules of law should predict how courts will decide future cases, but that the “abstract idea” standard, much like the law of obscenity, is based on an “I’ll know it when I see it” approach that is difficult to both predict in future cases and review on appeal.

Finally, Judge Plager noted that there is “little consensus” among judges regarding whether a patent case has claims directed to an abstract idea, and if so if there is an ‘inventive concept’ sufficient to save the claims. Therefore, the “abstract idea” defense “does not distinguish good [patents] from ill in any coherent sense, and thus does not serve well either patent law or the public.”

A patent claim is directed to an abstract idea when the claim is centered on a result or the solution to a problem without explaining how the result is achieved or the problem is solved except by using general computer technology.