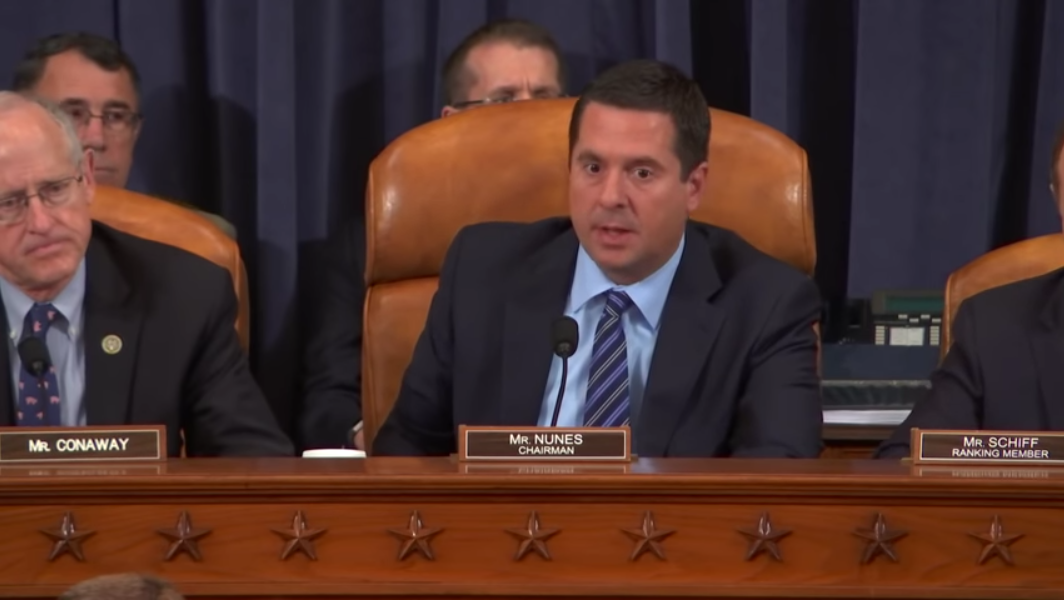 On the morning of Thursday, July 19th, the House Permanent Select Committee on Intelligence held a hearing titled China’s Threat to American Government and Private Sector Research and Innovation Leadership. The day’s hearing was dedicated to discuss strategies, both legal and illicit, which are employed by the Chinese government and designed to gain a competitive advantage over the United States.

The start of the hearing was dominated by a dustup between Congressman Devin Nunes (R-CA), chairman of the committee, and ranking member Congressman Adam Schiff (D-CA). Schiff began his opening statement by focusing on the recent summit between President Donald Trump and Russian President Vladimir Putin, an event which Schiff said could be “charitably described” as “disastrous.” Schiff made a motion to subpoena President Trump’s interpreter to appear before the committee so that person could be questioned on the subject of the two-hour private meeting between Trump and Putin that occurred during the summit. In response, Nunes said that the only motion that Schiff could make during this particular hearing was a motion to adjourn. After a quick back-and-forth about the issue, Nunes called a recess lasting 15 minutes after which a roll call vote was taken on tabling Schiff’s motion. In an 11-6 vote that broke down along party lines, the committee decided to table Schiff’s motion. The idea that Russia posed the same kind of threat to the U.S. that China does was vehemently denied by panel witness James Phillips, Chairman and CEO of NanoMech Inc. “All this talk about Russia, I mean I’ve been watching it on the TV, Russia’s nothing, it’s a zero,” Phillips said. “We need to quit talking about Russia… There’s a real war going on. It’s a cyber war like never before where they’re invading the United States everyday, trying to take over the United States in terms of all of our science technology. If they’re not stealing it, they’re imitating it, or they’re trying to get it through other means like I’ve just described. Russia’s a nobody. They’re off the charts.”

Although the United States has previously won an economic war against a nation led by the Communist Party in the Union of Soviet Socialist Republics (USSR), Schiff’s opening statement noted that the challenges posed by Communist-led China are much different. “Throughout the 70 years of its existence, the Soviet Republic never posed a true economic challenge to the United States or the West,” Schiff said. “Consumer goods were chronically in short supply and shoddily made, Soviet agriculture was notoriously unproductive and the tech sector was devoted almost solely to the military… China, on the other hand, has built a dynamic economy that has been growing rapidly for several decades and which has lifted hundreds of millions out of poverty and made Beijing a world leader in both manufacturing and technology.” Schiff added that since 2001, the year that China became a member of the World Trade Organization (WTO), that country’s gross domestic product (GDP) has increased by more than 1,000 percent.

Panel witness Michael Pillsbury, Director for the Center on Chinese Strategy at the Hudson Institute, said that examples of U.S. investment dollars aiding China’s development of its own infrastructure were “plentiful.” Pillsbury noted that U.S. companies have invested money in the Chinese firm behind the dredging of the South China Sea to create artificial islands, an investment activity which is completely legal despite the international crisis caused by China’s island building. He also discussed China’s access to U.S.-sponsored scientific research through agreements with the National Science Foundation (NSF) which discloses published research to the Chinese as soon as 60 days within publishing. “What we’re going to do to stop this is probably going to depend on the Congress,” Pillsbury said. 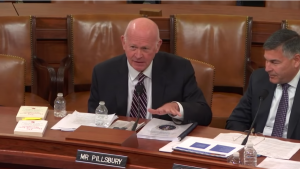 Michael Pillsbury, Director for the Center on Chinese Strategy

Phillips said that one avenue through which the U.S. government could maintain its economic advantage over China is through greater support of tech transfer operations at American universities. Such tech transfer offices often receive a fraction of what universities spend on their sports program, Phillips noted. “Yet the president of that university is going to expect a Gatorade a week in terms of innovation,” he said. “Unfortunately, this is a huge stranding of intellectual property and what happens is that typically you have very, very, very, very few of our incredible science projects ever see the light of day and what happens is that it moves very quickly to what’s called ‘publish or perish’ and then we’re publishing our very best science out of our universities, national labs, literally onto the Internet giving it free to countries like China.”

Interestingly, in Phillips’ published testimony, he discusses the fact that NanoMech’s IP law firm has advised the company not to file for Chinese patents on the belief that China’s patent system is corrupt. If true, that’s frightening given that 1.3 million patent applications were filed with China’s State Intellectual Property Office (SIPO) in 2017, more than one-third of all global patent application filings that year. China has also been relaxing examination guidelines for software patents and streamlining examination processes for Internet-related patents in an effort to incentivize more patent filings in incredibly valuable tech sectors.

Cyber threats, especially cyber espionage, was cited throughout the hearing as a major way in which China has attempted to gain an advantage over the United States. Elsa Kania, Adjunct Fellow of Technology and National Security at the Center for a New American Security, noted that while Chinese hackers hadn’t been considered to be that sophisticated in years past, training resources made available in recent years by the People’s Liberation Army (PLA) had greatly increased the skills of Chinese hackers. Michael Brown, Presidential Innovation Fellow and formerly the CEO of Symantec, stated that there were anywhere from 250,000 to 300,000 members of the PLA worked every day to exploit online resources to the benefit of China’s commerce and national security. “They’re focused on what can be stolen commercially to benefit companies that have support of the Chinese Communist Party,” Brown said.

In terms of actions the U.S. could take to address the threat posed by China’s growing international economic dominance, Brown and Kania both told the committee that working together closely with allies was a positive step. Brown specifically noted that the group of American allies affected by China’s mercantilist policies had a combined GDP of $55 trillion and that could provide enough heft to address China. Brown also suggested better prioritization of China’s illegal activities to more effectively address those issues as well as the pursuit of domestic policies to improve science, technology, engineering and mathematics (STEM) education and to support U.S. research and development. “We’ve won technology races in the past, we’ve got to employ those techniques again,” Brown said. One can only hope that such techniques would involve measures to improve the U.S. patent system which has been dramatically weakened in recent years. Otherwise, increased R&D investment will likely only result in innovations which can’t be reasonably protected by inventors and thus preventing economic growth.