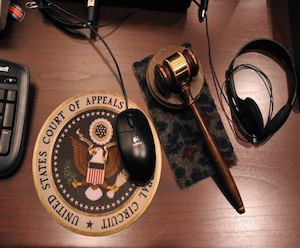 TF3’s patent-in-suit is for a “hair styling device” that automated the curling of hair. TF3 appealed the decision of the Board in an IPR requested by Tre Milano. Based upon its broad construction of certain claim terms, the Board held that two prior art references made the challenged patent claims invalid for anticipation. TF3 appealed.

First, the Board failed to construe “the length of hair can pass through the secondary opening” and so did not limit the claims to require a second opening. The specification described how the curled hair is removed from the device without being uncurled, which required a second opening. Nonetheless, the Board found the requirement of a second opening irrelevant, by relying on the phrase “i.e., to slide along the elongate member towards and subsequently off its free end.” The Board stated that “[w]e do not understand the use of ‘i.e.’ to signify that the passing out of the secondary opening always must be accomplished by sliding along and off the elongate member.” In response, the Federal Circuit explained that the usage of “i.e.” in the specification does signal “an intent to define the word to which it refers,” in this case a mode whereby the curl slides out of the device without stretching or uncurling, via a second opening. In context, the Board erred by finding that “i.e.” did not require a second opening such that the hair curl can be removed from the device without being uncurled. Ultimately, the Court concluded that the patent describes the device as improving curl retention by a structure that “permits a formed curl to slide off the end of the elongate member without being uncurled,” a structure which the cited prior art references did not disclose.

Next, the Board construed “free end” to mean “an end of the elongate member that is unsupported when the movable abutment is in the open position.” The Board’s construction was incorrect because the specification is clear that the free end is not a structural support, but an end over which the curl slides.

Finally, the Court concluded that the Board’s decision finding anticipation was based on its improper enlargement of the claims. Accordingly, the court reversed the Board’s invalidity decision and held that the patent claims were not anticipated.