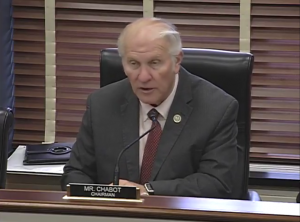 On the morning of Wednesday, July 11th, the House Small Business Committee held a hearing titled Innovation Nation: How Small Businesses in the Digital Technology Industry Use Intellectual Property. Though the witness panel was not quite as one-sided as those seen testifying in front of the House IP Subcommittee in recent years, an informed observer could not help but conclude that yet another opportunity to seriously address the damaged state of the U.S. patent system was missed to the detriment of many of the small businesses which the committee purports to protect.

The opening statements of Congressman Steve Chabot (R-OH), chairman of the committee, and Congressman Dwight Evans (D-PA), acting ranking member at the hearing, spoke to the incredible importance of intellectual property to the United States’ economy. Both of them cited the $6.6 trillion in economic value that IP-intensive industries contribute to American gross domestic product (GDP), with Evans further noting that this figure represented more than one-third of total U.S. GDP. Small businesses are a very important contingent of IP-intensive industries and Chabot said that 96 percent of manufacturing firms with a high number of patents were small entities. Both spoke to the damaging effects of counterfeits and IP theft on American small businesses and Chabot lauded the House of Representatives’ passage of the Small Business Innovation Act of 2017 the day before the hearing.

Anyone hoping to hear a discussion about the detrimental effects of recent reforms to the U.S. patent system might have been cheered to see that one of the panel witnesses was Frank Cullen, Vice President of U.S. Policy at the U.S. Chamber of Commerce’s Global Innovation Policy Center. After all, it’s the Chamber of Commerce’s IP Index which recently ranked the U.S. patent system as 12th-overall because of key weaknesses like narrowed patentability standards in software and biotech sectors as well as the unpredictability created by the nation’s patent opposition system. Cullen’s testimony, however, only noted that the U.S. is the top scorer for having the strongest overall IP system. While technically true, that’s a lead which has been escaping the U.S. in recent years because of patent system reforms. 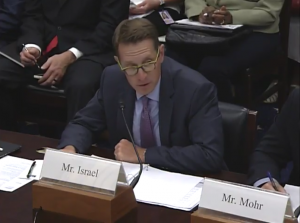 The only member of the witness panel who seemed willing to have a sober discussion about the negative effects which recent patent reforms have had on small businesses was Chris Israel, Executive Director of the Alliance for U.S. Startups & Inventors for Jobs (USIJ). Israel filled in the blank left by Cullen by actually speaking about the U.S. patent system’s recent ranking on the Chamber’s IP Index. Israel’s testimony submitted to the committee spoke to the myth of the patent troll, the systemic weakening of the U.S. patent system and results of a study conducted by USIJ which showed that the percentage of total venture capital funding invested in the Internet networking, wireless communication, drug discovery and medical devices sectors has declined from 20.95 percent in 2004 down to 3.22 percent in 2017. By contrast, the percentage of VC funding investment in the social network, social apps, business-to-consumer and financial services sectors rose during that same period from 11.4 percent up to 36.3 percent. “While the latter group has certainly led to some interesting products and services, created a lot of jobs and led to some very well-known and ubiquitous global companies, these are not typically the sectors that are generally investing heavily to push the outer boundaries of science and technology to remain competitive in a global market,” Israel said. 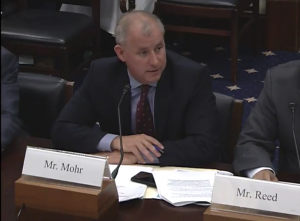 Supporters of the efficient infringement cabal, however, would be very supportive of comments made throughout the day’s hearing by Christopher Mohr, Vice President for IP and General Counsel at the Software & Information Industry Association (SIIA). Mohr’s testimony viewed both the America Invents Act of 2011 as well as the Supreme Court’s 2014 decision in Alice Corporation v.CLS Bank International in a very positive light, citing these as reasons why software research and development spending increased by 27 percent in 2015 alone. This argument put forth by Mohr is incredibly disingenuous and it deserves to be discredited. We’ve already seen groups like the High Tech Inventors Alliance (HTIA) skew the same PwC data proffered by Mohr in very similar ways. The PwC data from the report cited by Mohr tracks the research and development spending at the largest 1,000 R&D investing firms globally. Why that data holds any sway in front of a committee devoted to small business issues is anyone’s guess. Small businesses who are members of the SIIA should know that Mohr’s support of recent patent system reforms indicate that he does not have their best interests at heart.

Interestingly, however, Mohr seemed to have an accidental moment of clarity near the end of the hearing during questioning by Congressman Dave Brat (R-VA). Brat asked the panel about IP issues created by Chinese deceptive trade practices and to what extent did that situation have an impact on the issues being discussed during the hearing.

“I think what you see is where you have, if you have particular economies or particular cultures in which those property rights are not respected on a micro-level, on a macro-level you’re going to have problems. And that’s exactly what’s happening… It’s a big problem with a lot of moving parts.”

The problems of inadequate IP protections in the digital age were underscored by the testimony of Morgan Reed, President of ACT | The App Association. Reed testified about an Ohio-based member of his organization who faced issues after publishing a free-to-download app which was pirated and then illegally downloaded thousands of times. Not only was the developer of the pirated app earning all of the ad revenues generated by the pirated app, but the legitimate developer of the free app had to pay the hosting service bill for the ad videos generated by the pirated app. Of course, this story involves issues of copyright enforcement. ACT is yet another organization that supports the AIA and the Patent Trial and Appeal Board (PTAB) as “a useful and important means of reviewing the validity of patents that are overly broad and weaken the patent system for both IP holders and licensees.”

It’s really frustrating to watch yet another House committee give voice to so many anti-patent viewpoints and then offer up a single rational viewpoint on the damage sustained by the U.S. patent system as a mild-mannered foil. Why not have a representative from an actual small business trying to leverage their IP assets? That’s what the hearing was supposed to be about, after all. Why not a representative from VoIP-Pal, which is languishing under a sanctions motion which the PTAB refuses to decide? Why not a Josh Malone, who has spent millions upon millions trying to vindicate his patent rights? Are these committees dim, or do they just not care?