Lofgren Supported Eliminating BRI Before She Was Against It 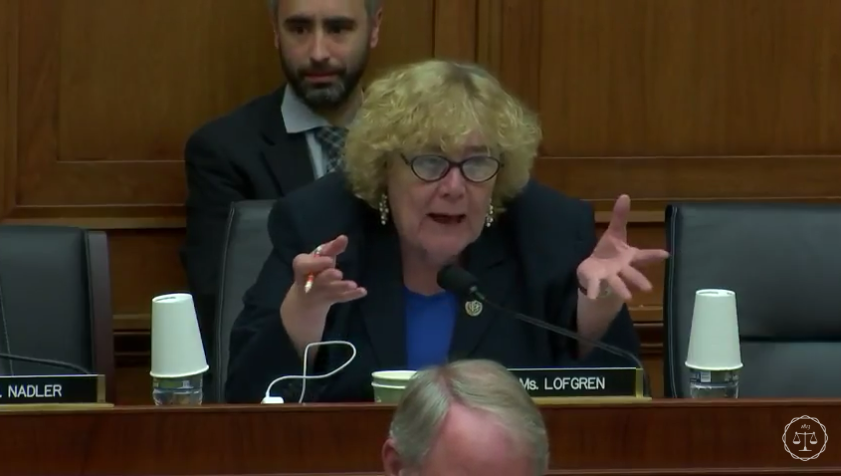 At a recent House Judiciary Committee Oversight Hearing, Congresswoman Zoe Lofgren (D-CA) jumped into the patent troll debate with both feet, casting herself as a staunch defender of efficient infringement as she wondered what in the world is going on at the United States Patent and Trademark Office. For additional coverage see here and here.

During her questioning of USPTO Director Andrei Iancu, Lofgren used both her allotted time and time yielded to her by Congresswoman Karen Bass (D-CA) to push back against the recently proposed agency rule which would change the standard of claim construction applied in Patent Trial and Appeal Board (PTAB) trials from the broadest reasonable interpretation (BRI) of challenged claims to using the Phillips standard of claim construction used in Article III courts. She argued that Director Iancu’s proposed rule was particularly concerning in light of the U.S. Supreme court’s recent decision in Oil States v. Greene’s Energy Group, which upheld the constitutionality of inter partes review (IPR) proceedings.

“I’m not saying that it’s unlawful but it does seem to me to circumvent Congress’ prerogative on this issue, and, you know, you’re seeking for us to eliminate our prerogative to set fees while you’re assuming our prerogative in a way that I think is disturbing, honestly. Now as I’ve looked at the suggestions on why this is necessary, I have not found them compelling. One concern I have as well is the potential of res judicata arising from district court interpretation tying the hands of the PTAB which doesn’t happen now because there are different standards. If you make this change, the PTAB could be bound by res judicata to follow a district court or the ITC’s finding on validity which would completely blow up what we were trying to do as a Congress to clear this out… It looks to me that the people who disagreed with [the AIA] and lost in the Congress, they went to the Supreme Court, they lost in the Supreme Court, and now they’re going to you, and you are reversing what the Congress decided to do and what the Court said was permissible to do.”

Simply stated, Congresswoman Lofgren is wrong. Congress did not decide on a claim construction standard to apply during post grant challenges at the Patent Office, which is precisely why that decision was initially left open to the discretion of the implementing agency; the USPTO. It is also precisely why that decision remains open to the discretion of the USPTO, and how and why Director Iancu can change the standard via the rulemaking process.

Furthermore, Congresswoman Lofgren seems quick to forget that she was one of the original co-sponsors of the Innovation Act when it was introduced into the House back in February 2015. Had that bill passed, it would have required patents challenged in IPR proceedings to be construed in the exact same manner that a district court would have required in a civil action to invalidate the patent (i.e.: the Phillips standard). Specifically, the Innovation Act (HR 9) said in relevant part:

[E]ach claim of a patent shall be construed as such claim would be in a civil action to invalidate a patent under section 282(b), including construing each claim of the patent in accordance with the ordinary and customary meaning of such claim as understood by one of ordinary skill in the art and the prosecution history pertaining to the patent…

So, it seems Lofgren was for the Phillips standard and eliminating BRI before she was against it.

Nevertheless, in response, Director Iancu noted his stance on trying to bring consistency between the USPTO, district courts and the ITC claim construction standards, citing the more than 80 percent of patents involved in parallel proceedings at the PTAB and at other forums. This consistency would reduce gamesmanship between forums and enhance the Congressional intent behind the AIA by making the PTAB a true alternative to district court litigation with consistent standards.

“In order to have a predictable patent system that folks can rely on, it seems that the meaning of a patent, when one sits down to look at a patent and try to invest in it, or invent around it, whether the owner or the public, it seems that the meaning of that patent or the boundaries of that patent, at least objectively, should not depend on the forum on which it might happen some years down the line that that patent is challenged in, if one is to make predictable decisions based on that patent.”

After being yielded time from her fellow Congresswoman from California, Lofgren continued to launch her attack against Director Iancu’s reasoned argument that patent validity standards at the PTAB should align with the Phillips standard. She derided Iancu’s response as a “law school answer” all while repeating the fallacy that “in the real world we have patent trolls out there holding people up.”

It’s not without reason that Lofgren would choose to regurgitate the very rhetoric which has done a great job of decimating the U.S. patent system in recent years. In fact, other aspects of the USPTO oversight hearing make it clear that there’s a true California connection working to tip the scales of the U.S. patent system in favor of massive tech corporations, many of which call Silicon Valley home. To wit, the only other committee member at that hearing to raise concerns over the proposed rule change was Rep. Darrell Issa (R-CA), a well-financed ally of the efficient infringer lobby who is himself a patent troll.

Issa argued against the alignment of claim construction standards based on the logic that IPRs and other PTAB trials more closely resemble other agency actions like reexaminations instead of Article III proceedings. Issa even made the stunningly sober admission that many patent owners going through the PTAB are left with only “the shambles of a patent” and that there should be a process following those trials to “legitimize whatever patentable material is left.”

Not only was Lofgren a co-sponsor of the Innovation Act in February 2015, but so too was Issa. That bill would have eliminated BRI, which Lofgren and Issa are now arguing to keep intact. It is exactly this type of change of positions that gives people whiplash inside the beltway of our nation’s Capitol, and why there is so much skepticism with respect to Congress. Lofgren and Issa were supporting a bill just three years ago that would do precisely what Director Iancu is trying to do now, but for some reason the idea is antithetical to everything they stand for, at least at the moment.

What happened in those few short years that so changed the viewpoints of these and perhaps other members of DC’s political elite? We can all guess what it is that happened, and it relates to one of the larger evils in American politics: Money and benefactors.

According to OpenSecrets.org, the campaign committee of Zoe Lofgren has received $770,600 in contributions during the 2017-18 election cycle. More than $130,000 worth of that total comes from the electronics manufacturing and equipment sector, the single largest industry sector contributing money to Lofgren’s 2018 re-election campaign. The top 20 contributors to Lofgren include a host of names that are deeply entrenched in the efficient infringement side of the battle for the soul of the U.S. patent system. This includes Cisco, a member of the High Tech Inventors Alliance and the 2nd-largest contributor to Lofgren’s campaign ($25,250). Other tech giants contributing to Lofgren’s coffers include Alphabet (6th largest, $18,800), Microsoft (7th, $14,300), Apple (9th, $10,900), Facebook and Netflix (both 14th, $10,400). Given that these funds, which are crucial to Lofgren, represent a small fraction of what any of these tech giants would have to pay if patent owners could actually enforce their patent rights in the face of infringement, it makes prefect sense for those companies to contribute within the limits (or lack thereof) of the law.