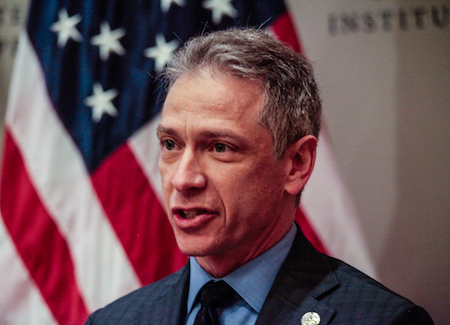 Andrei Iancu has been Director of the United States Patent and Trademark Office (USPTO) for just three months. He has been giving speeches raising the hopes of patent owners, even promising that the American patent system will not continue down the same path it has been on over the last several years. In his short time leading the nation’s innovation agency he has delivered hope, and the industry is already seeing results. The Berkheimer memo giving examiners guidance regarding patent eligibility was a welcome breath of fresh air. Today, however, is a first glimpse of what many have been waiting to see — action on the Patent Trial and Appeal Board (PTAB).

Earlier today the USPTO announced proposed rulemaking that would change the prior policy of using the Broadest Reasonable Interpretation (BRI) standard for construing unexpired and proposed amended patent claims in PTAB proceedings under the America Invents Act and instead would use the Phillips claim construction standard. The new standard proposed by the USPTO is the same as the standard applied in Article III federal courts and International Trade Commission (ITC) proceedings, a change critics of the PTAB process have urged for many years in order to bring uniformity to post grant challenges across forums.

“Having AIA trial proceedings use the same claim construction standard that is applied in federal district courts and ITC proceedings also addresses the concern that potential unfairness could result from using an arguably broader standard in AIA trial proceedings,” the NPRM says. “Under the proposed approach, the Office would construe patent claims and proposed claims based on the record of the IPR, PGR, or CBM proceeding, taking into account the claim language itself, specification, and prosecution history pertaining to the patent. The Office would apply the principles that the Federal Circuit articulated in Phillips and its progeny.”

The USPTO is also proposing to amend the rules for PTAB trials to add that the USPTO will consider any prior claim construction determination concerning a term of the claim in a civil action, or an ITC proceeding, that is timely made of record in an Inter Partes Review (IPR), Post Grant Review (PGR), or Covered Business Method (CBM) proceeding.

The purposes of the proposed rule include, among other things, are to ensure consistency in claim construction between the PTAB and proceedings in district court or at the ITC, and to increase judicial efficiency. “The Office’s goal is to implement a fair and balanced approach, providing greater predictability and certainty in the patent system,” the Notice of Proposed Rulemaking (NPRM) reads.

While there is much left to do in order to truly bring a fair and balanced approach to PTAB proceedings and to provide predictability and certainty in the U.S. patent system, today marks a very important first step. It would seem that Iancu’s words are not the typical political rhetoric one hears so frequently in Washington, DC. His words have meaning, and he seems interested in delivering. Hopefully, we will see more from the USPTO as he continues to familiarize himself with the inner workings of the Office, and particularly with the PTAB processes, but we turn the corner.

Certainly, it will be argued by those who support the PTAB that there is no difference, really, between BRI and Phillips, and perhaps they are right. Perhaps at the end of the day, there will be few cases decided by a change in the standard applied, but that doesn’t make the change any less significant. With this change, once the proposed rules become effective, the USPTO will be saying that issued patents, when reviewed at the USPTO, deserve the same respect as they receive in federal courts, and prior claim constructions issued by federal court judges and the ITC will be considered and not simply ignored. This alone brings a more balanced, sensible equilibrium to the system that was supposed to use post grant challenges as an alternative, not another bite at the apple using easier standards with Administrative Patent Judges biased in favor of invalidating issued patents.

The NPRM, which was signed by USPTO Director Andrei Iancu on May 3, 2018, will officially publish in the Federal Register on Wednesday, May 9, 2018. What was made available today is an advance copy of what will be published in the Federal Register, and is routine government practice.  Therefore, those wishing to submit comments should submit comments to [email protected] within 60 days from the official publication.