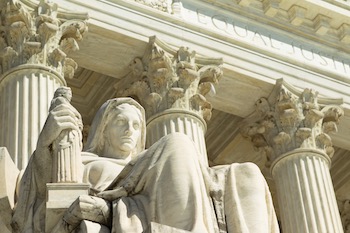 Oil States v Greene’s Energy, 584 U.S. ___ (2018), just decided that patents are a public right, a franchise right, akin to a right to erect a toll bridge, and not personal property (slip op. at 9).  Therefore inter partes reviews (IPRs) do not violate Article III or the Seventh Amendment.  Although most practitioners were hoping that Oil States would rule widely on the constitutionality of the PTAB, the issues raised–and the issues decided on–are narrow.

What was unfortunately never addressed in Oil States, and which the court specifically left the door open for, was that patents rights are still property rights for the purpose of Due Process–the inference being that IPRs may fail under the Due Process or Takings Clause.  Indeed the court seemed to lament that Oil States did not challenge the retroactive application of IPRs and their constitutional sufficiency on a broader basis.  From the court:

We emphasize the narrowness of our holding.  We address the constitutionality of inter partes review only… Moreover, we address only the precise constitutional challenges that Oil States raised here.  Oil States does not challenge the retroactive application of inter parties review, even though that procedure was not in place when its patent issued.  Nor has Oil States raised a due process challenge.  Finally, our decision should not be misconstrued as suggesting that patents are not property for the purpose of the Due Process Clause or the Takings Clause.  (pg 16-17, emphasis added)

That sounds like the type of language that a reluctant Justice would have required before joining the majority.  As it is, the majority opinion only garnered seven out of nine votes.

Even though the ruling is that patents are a franchise for the purpose of Article III, they are still a property right for the purpose of Due Process.  The court seems to be asking that Oil States or another patent holder challenge the due process of the matter.  If so, we believe such a challenge would garner more votes, perhaps even a majority.  A good basis would be Mathews v. Eldridge, 424 U.S. 319 (1976).

The Mathews v. Eldridge test involves the constitutional sufficiency of administrative procedures prior to the termination of rights and requires consideration of three factors: (1) the private interest that will be affected by the official action; (2) the risk of an erroneous deprivation of such interest through the procedures used, and probable value, if any, of additional procedural safeguards; and (3) the Government’s interest, including the fiscal and administrative burdens that the additional or substitute procedures would entail.

Looking to those three factors, IPRs are quite vulnerable to constitutional challenge.

Factor 1), the private interest that will be affected by the official action

The private interest is an invention.  This runs the spectrum from the inane to the world changing.  In order to acquire a patent, a company or individual must undertake a process where they disclose their secret information to the public, and undertake an arduous process.  Justice Gorsuch in the Oil State’s dissent quotes it as “maybe $30,000.00 and two years,” (pg 1), though that could be called optimistic.  Sometimes it is much longer and at much greater cost.  Even that assumes success.  There is a large risk that after the invention is disclosed, it will be deemed an obvious combination or an unpatentable abstract concept.

Factor 2), the risk of an erroneous deprivation of such interest through the procedures used, and probable value, if any, of additional procedural safeguards

The Supreme Court has already remarked that it is highly unusual that a right can be subject to two different outcomes using two different administrative bodies.  The less rigorous PTAB standard has a now infamous tendency of invalidating patents.  As of September 2017, in instituted cases, 81% of patents have at least some of the claims invalidated, and 65% are held completely invalid.  Over 15% of patents have had multiple petitioners, sometimes as many as nine.  Keep in mind that these are patents that were already granted in a multi-year process, which is why they have historically been deserving of a presumption of validity.

Conflicting findings between courts and the PTAB on the same patents, and the less rigorous PTAB standard, suggest there is a significant risk of erroneous deprivation of patent rights in IPRs.

While additional procedural safeguards may be imminent and valuable, they may or may not be sufficient for Due Process.  The PTO has thus far been reluctant to embrace such safeguards.

Looking only to some of the statutory requirements of §316 that the PTAB did not even honor, there are:

(316(d) AMENDMENT OF THE PATENT.— (1) IN GENERAL.—During an inter partes review instituted under this chapter, the patent owner may file 1 motion to amend the patent in 1 or more of the following ways: (A) Cancel any challenged patent claim. (B) For each challenged claim, propose a reasonable number of substitute claims.

318. Decision of the Board — (a) FINAL WRITTEN DECISION.—If an inter partes review is instituted and not dismissed under this chapter, the Patent Trial and Appeal Board shall issue a final written decision with respect to the patentability of any patent claim challenged by the petitioner and any new claim added under section 316(d).

In addition, there has been a disturbing stacking of the judges in the PTAB to influence the outcome of a case.  This is one of the points that Justice Gorsuch warns about in his Oil States dissent:

“The Director of the Patent Office is a political appointee who serves at the pleasure of the President.  He supervises and pays the Board members responsible for deciding patent disputes.  The Director is allowed to select which of these members, and how many of them, will hear any particular patent challenge.  If they (somehow) reach a result he does not like, the Director can add more members to the panel—including himself—and order the case reheard.  Nor has the Director proven bashful about asserting these statutory powers to secure the ‘policy judgments’ he seeks.” (pg 3)

Factor 3) the Government’s interest, including the fiscal and administrative burdens that the additional or substitute procedures would entail

It is hard to imagine that procedures written into the statute constitute undue fiscal or administrative burdens for the Government.  Nor are safeguards against conflicts of interest in stacking a panel.  It is also worth remembering that the patent office is a revenue-generating agency and employs over 12,000 people.  It clearly has the budget and manpower for additional or substitute procedures.

Although factor 3 can be read to cover primarily fiscal burdens, it is worth first mentioning the intangible Government interest involved.  The entire patent system is in place to aid in the promotion of the useful arts.  A strong patent system is synonymous with investment and promotion in new technologies.  Time and again it has been shown that weak patent rights result in underdeveloped industries, even when the abridgment of the patent rights were intended actually to aid the industry incumbents.  Although not always intuitive, a strong patent rights system is a public good.  Therefore the Government’s interest is no less than the promotion of innovation itself.

In conclusion, inter partes review may still be held unconstitutional when it is challenged under the three-prong Mathews v. Eldridge test.  The majority opinion in Oil States explicitly left room for just such an outcome.

James Carmichael James Carmichael is the Founder and Managing Partner for Carmichael IP, PLLC, and a former Administrative Patent Judge on the Board of Patent Appeals and Interferences (now the Patent Trial [...see more]

Brad Close As the Executive Vice President of Licensing and Transactions at Transpacific IP Group Limited, Brad Close adds to the strength of the transactions team with his years of experience on patent [...see more]