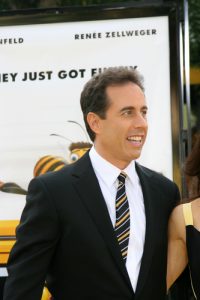 In early February, a copyright complaint was filed in the Southern District of New York against comedian Jerry Seinfeld and a series of companies involved with the production and distribution of the web series Comedians in Cars Getting Coffee. The plaintiff, director Christian Charles, claims that he created the proof-of-concept and pilot episode upon which the web series is based and that he has been shut out from the production, profits and royalties in violation of his copyright.

Charles alleges that his work on the series concept goes back to the year 2000 when he was involved with filming a cross-country road trip shared by Seinfeld with a friend of his on Seinfeld’s return to New York City; that footage would be used for the 2002 theatrical release Comedian, a film directed and co-created by Charles. To support Charles’ concept development, collaborator and producer Gary Streiner allegedly performed extensive research on camera equipment “as well as the logistics of uninterrupted filing in cars.”

Charles allegedly first pitched this show concept to Seinfeld in 2002 and while he “continued to collaborate creatively on many more projects” with Seinfeld, it wasn’t until July 2011 that Seinfeld followed up on the project and asked Charles to contribute to development of the show. While shooting footage for a test pilot in October 2011, Seinfeld backed away from the project, allegedly saying, “I don’t know what it is.” Charles would go on to continue the project, completing a test pilot which was well received by Seinfeld and his representation and led Charles to work with his own representation to negotiate creative contribution and backend participation terms with other parties involved in the production of the series.

“When Seinfeld heard that my reps were negotiating…, his response was an irrational belief that only he deserved any credit for the show,” Charles complaint reads. Seinfeld allegedly “expressed outrage” that Charles would participate as anything more than a work-for-hire director. After a pair of contentious phone calls, Charles alleges that Seinfeld, Sony and other defendants “willfully and swiftly moved forward with the Show without obtaining a chain-of-title or release paperwork for the concept; shutting me out.” According to the complaint, Charles believes that Seinfeld has accrued millions of dollars in sponsorship and advertising deals regarding the web series and that the comedian may be earning $750,000 per new episode produced for Netflix. Along with direct and punitive damages, Charles is also seeking recognition by way of screen credit as well as appropriate compensation.

On April 4th, Seinfeld and other defendants in the case filed a memorandum of law in support of their motion to dismiss the case. Defendants argued that the copyright claim must be dismissed by the court as time-barred given that more than three years had passed since Seinfeld began claiming sole ownership of the show’s concept. According to defendants, the plaintiff’s acknowledgement that Seinfeld had been claiming sole ownership of the show since the series began open distribution in July 2012 provides a clear basis for dismissing the claims for being filed after the statute of limitations expired.

If the court couldn’t dismiss the claims for being time-barred, defendants argue in the alternative that they should be dismissed for failing to allege a protectable copyright interest. Seinfeld and others argue that the concept of comedians driving in cars to get coffee and engage in comedic banter “consists of nothing but ‘common stock ideas’ and unoriginal scènes à faire that do not rise to the level of original protectable expression.” Defendants note that a number of copycat shows have followed Comedians in Cars Getting Coffee that use a similar concept including Carpool Karaoke, Comedians on Bikes Getting Soup and Cougars in Cars Getting Cosmos. “Mr. Seinfeld has not sued them for infringement – nor could he – because there is nothing original about their shared underlying concept.”

Further, the defendants argue that Charles fraudulently obtained his copyright and so it is invalid as a matter of law. Defendants registered their copyright to the first episode in Comedians in Cars Getting Coffee on September 8th, 2016. Ten days later, on September 18th, plaintiff Charles registered his copyright to a dramatic work titled Comedians in Cars Going for Coffee. “There can be no doubt that the suspicious change in the Show’s title (‘going for’ as opposed to ‘getting’) was designed to mislead the Copyright Office into accepting a copyright application that directly conflicted with the one filed by Mr. Seinfeld,” the defendants’ filing reads. Further, defendants argue the plaintiff misleadingly changed the title of the copyright registration in the original complaint to make it seem as though the copyright covered Seinfeld’s web series.