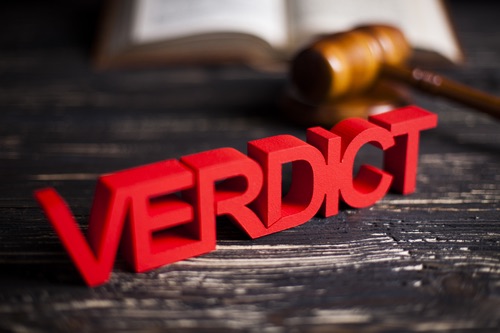 VirnetX first sued Apple back in 2010 (6:10-cv-00417), for which the jury awarded VirnetX $368 million in damages in November 2012 plus a 1 percent ongoing royalty on iPhones. The four patents-in-suit relate generally to creating Virtual Private Network (VPN) connections from a client to server by way of sending a domain name service (DNS) request. VirnetX had alleged that Apple’s FaceTime and iMessage applications continue to practice the claims of these four patents.

Apple however appealed the decision and won a damages retrial. In the retrial, VirnetX doubled down and claimed $532 million in damages instead, and later (due to continued willful infringement) increased the claim to $625.6 million – which the new jury also awarded to VirnetX in February 2016, though Judge Robert Schroeder threw out that verdict, holding that the jurors may have been confused about the damages calculation.

In October 2016, at a third trial, the jury awarded VirnetX a $302.4 million verdict for two of the four patents (’504 and ’211) for which infringement had already been determined. This verdict was also increased to $440 million. Judge Schroeder held that Apple’s decision to continue to sell iPhones with the VPN-on-Demand technology after losing the 2012 trial was “unreasonably risky or reckless”, could not be justified and therefore must be considered as willful infringement.

VirnetX’s stock prices naturally shot up over 40% after market hours after the verdict was delivered – though the celebration may be short-lived. Not surprisingly, Patent Trial and Appeal Board has already stated in cases currently pending at the Federal Circuit that the patents are invalid – so when in time the Federal Circuit issues its verdict, Apple is almost certainly going to get this verdict thrown out as well. Just as the Eastern District of Texas continues its reputation for being plaintiff-friendly, the PTAB continues its reputation for being infringer-friendly and in some circles, even adverse to patent rights in general.

According to its latest statistics, the PTAB has invalidated all claims in as many as 65% of instituted petitions and at least some of the claims in as many as 81% of the instituted petitions – which means either there exists such an incompetency at the USPTO that in 81% of these cases, the examiner allowed claims that should not have been granted – or that there exists a 81% bias against patent owners in PTAB. Both those possibilities are bad for inventors and businesses that spend thousands of dollars on earning patents, millions of dollars monetizing and enforcing their earned patent rights, and most certainly bad for the legal framework that assures small and medium sized businesses their competitiveness and fosters innovation in all quarters not just at large corporations.

Perhaps that is a battle worth fighting on a later day. Today at least, VirnetX and its stockholders have due cause to celebrate.