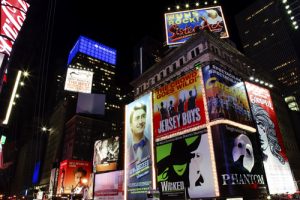 On Monday, April 2nd, U.S. District Judge Alvin Hellerstein entered an opinion and order denying summary judgment in the Southern District of New York in a case involving the stage musical production of Anastasia currently running on Broadway. Judge Hellerstein denied the motion for summary judgement filed by defendants Anastasia LLC and Terrence McNally, the bookwriter for Anastasia, finding that there were material facts in dispute regarding claims that the Broadway musical was substantially similar to a play which was first registered with the U.S. Copyright Office back in 1948.

This case involving claims of copyright infringement was first filed by plaintiff Jean-Etienne de Becdelievre, the heir to the copyright interests covering the original French play of the Anastasia story, back in December 2016. The complaint notes the licensing history of the stage play Anastasia by French playwright Marcelle Maurette, a play which had its U.S. copyright first registered in 1948 and then was first published in 1952. The original play is, like the Broadway musical, a fictionalized account of “a young woman who claims that she is Russian Grand Duchess Anastasia Romanov and that she survived the execution of Czar Alexander Romanov and his family by communist revolutionaries in 1918,” the complaint reads. Although some aspects of the play are loosely based on historical events, such as imposters claiming to be surviving Romanov children, the play’s plot, scenes, dialogue and most of the characters were original and fictitious.

An English-language adaptation of the French play, created in collaboration with British playwright Guy Bolton, was registered for U.S. copyright protection in 1952; while plaintiff de Becdelievre is the sole holder of the copyright covering the French play, he shares the copyright to the English-language version with the successors to Bolton’s copyright. In 1955, Bolton and Maurette, along with the English-language stage production company Laurence Olivier Productions, licensed the film rights for Anastasia to Twentieth Century-Fox Film Corporation to produce a film incorporating elements of Maurette’s play. In 1963, Fox exercised its option to acquire the motion picture rights by way of assignment under terms of the original licensing agreement which reserved the rights to the production of the play on the “spoken stage.” Successors to Maurette and Bolton signed another assignment agreement with Fox in 1993 which granted all future interest and title to the motion picture rights to Fox. Under this agreement, Fox produced the 1956 film version of Anastasia starring Ingrid Bergman as well as the 1997 animated musical Anastasia.

In 2002, a dispute arose between de Becdelievre and Fox involving a licensing agreement between Fox and Ringling Bros. which gave Ringling the right to produce a live ice skating show based on the 1997 animated film version of Anastasia. In the written agreement resolving that dispute, Fox explicitly acknowledged that the 1955 licensing agreement expressly reserved all rights to present the play, including the English version, to the successors of Maurette and Bolton’s copyrights. De Becdelievre and Tams-Witmark Music Library, the Bolton copyright successor, granted a retroactive license to Fox for the live ice show performance in exchange for “substantial financial consideration” while excluding all future presentations of the ice show.

“While the Musical is ostensibly a Broadway stage adaptation of both the 1956 motion picture and 1997 Animated Film… the Musical includes multiple characters, plots line [sic] and other creative elements that are original to the Play,” the de Becdelievre complaint reads. Under the count for copyright infringement under 17 U.S.C. § 501, the plaintiff identifies 19 such infringing elements, especially various pieces of dialogue used in the recognition scene near the end of the play between Anastasia and the Dowager Empress, a fictionalized event occurring both in the 1952 play and the 2017 Broadway musical.

The defendants had made a motion for summary judgment on the issue that the 2017 Broadway musical is not substantially similar to the 1952 play. In denying that motion, Judge Hellerstein cited to various cases decided in Southern New York and the Court of Appeals for the Second Circuit, including the 2nd Circuit’s 1980 holding in Hoehling v. Universal City Studios, the use of summary judgment in copyright litigation has typically been frowned upon because the issues typically involve extremely close questions of fact. Because both works included both copyrightable and non-copyrightable elements, the latter including facts surrounding the actual life of Anna Anderson, Judge Hellerstein was required to review the play and musical under a “more discerning ordinary observer test” in which the analysis on the substantial similarity of the works would exclude non-copyrightable elements while still paying attention to similarities in the total concept, plot and setting of the works.

Judge Hellerstein found that the defendants’ had successfully argued that certain aspects of the Anastasia and Dowager Empress characters are non-copyrightable for being based on historical fact. However, Judge Hellerstein found that a close reading of the 1952 play and the 2017 musical reveal crucial elements of both that cannot be traced to the historical record, including a scene where the Anastasia character is recruited into a conspiracy to pose as the Russian princess, another scene where Anastasia is tutored on Romanov history and royal behavior and the climactic recognition scene between Anastasia and the Dowager Empress.

Defendants Anastasia Musical and McNally had argued that the concepts of a recognition scene or the presentation scene in which Anastasia is to be presented as the Romanov princess were non-copyrightable as scenes a faire concepts. However, Judge Hellerstein noted that plaintiff de Becdelievre wasn’t claiming copyrights to the concepts behind these scenes but rather “a particular expression of a… scene, constructed in a particular way, which can be protected by copyright.” Defendants also argued that the works differed in total concept and feel and while the court did agree that the works are of different genres and differed in terms of pace and dramatic feel, material questions of fact still remained which were not appropriate for determination on summary judgment.

The defendants also cited to cases in which summary judgment was granted on the issue that two works were not substantially similar, including Porto v. Guirgis, a 2009 case where summary judgment of no copyright infringement was granted in a case involving two works involving fictionalized accounts of a trial of Judas Iscariot. Judge Hellerstein’s opinion noted that in Porto, the court’s opinion focused on the idea of a trial of Judas Iscariot as a non-copyrightable element and that the plaintiff’s claim in that case was based on highly generalized descriptions of two works having very different details or patterns, which is not the case in the de Becdelievre complaint.

Judge Hellerstein’s order sets a status conference date of April 2013 which plaintiff and defendant parties will attend. At that time the court and parties will chart further progress in the case, discuss any remaining discovery and set a trial date if no new discovery is needed.