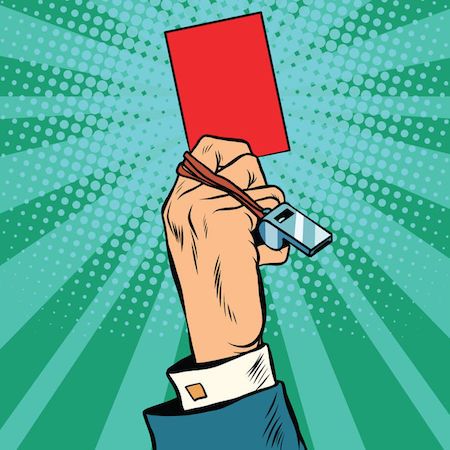 In preparation for an ethics CLE later this week I was reviewing final disciplinary decisions against registered patent practitioners. Not surprisingly, Michael I. Kroll’s name appeared twice over the past year. Kroll has been frequently disciplined by the Office of Enrollment and Discipline (OED) over the years.

What is surprising, however, is that Kroll continues to practice despite being disbarred. When reached for comment a spokesperson for the United States Patent and Trademark Office declined to comment.

Kroll was sanctioned three times by the OED Director, in 2004, 2010, and in 2015, resulting in three-year, five-year, and two-year suspensions, respectively. In each case the entirety of those suspensions were stayed without explanation. It can be surmised based on the punishment, which included restitution to clients, that in some misguided, pollyannish way the USPTO believed the only way to provide some measure of remedy for aggrieved clients would be to allow Kroll to continue to practice. Instead this only gave Kroll more opportunity to cause more harm to more clients.

Despite continued ethical misconduct, it is nothing short of stunning that Kroll was allowed to continue to practice as a registered practitioner given his track record with OED. Kroll has truly been a frequently flyer with OED. In addition to the 2004, 2010 and 2015 suspensions that were stayed, Kroll received warning letters from the OED Director in 2006, 2011, 2014, and 2015.

Finally, on April 10, 2017, Administrative Law Judge (ALJ) Alexander Fernandez issued an Initial Decision and Order concluding that the proper sanction against Kroll for his latest transgressions of the Rules was the exclusion from practice before the USPTO (i.e., disbarment).

On December 11, 2017, USPTO General Counsel Sarah Harris, on behalf of Joseph Matal, who was then performing the duties of Acting USPTO Director, affirmed the decision of ALJ Fernandez and disbarred Kroll. Among other things, this December 11, 2017, Order required Kroll to comply with the provisions of 37 CFR 11.58, which are numerous. Among many other things, Rule 11.58 specifically requires excluded practitioners to cease practicing law, and prohibits excluded practitioners from having direct communication with clients or prospective clients.

Despite being excluded from the practice of patent law before the USPTO, Kroll is openly continuing his practice. His website Invention.net is still up and running (see screenshot taken 4/2/2018), advertising his services as specializing in patent law and having obtained thousands of patents for inventors.

On Monday, April 2, 2018, an e-mail sent to [email protected] inquiring about assistance yielded a return e-mail containing advice on the need to quickly file a patent application because the U.S. is not a first to file country. The e-mail, with misspellings and spacing errors as they appeared in the response e-mail read in part:

We can also present your invention to companies who, if they like your idea may offer a royally contract.

cent change in the law makes the US a first to file rather than a
first to invent country and accordingly it is critical to file ASAP in
order not to lose the invention to an earlier filerA re.

The confidentiality disclosure and invention record attached in a Word document sent along with the e-mail included the following statement:

You absolutely do not need to travel for us to patent your invention.

We offer patent protection as well as marketing and selling your invention on a royalty basis.

A prototype is not necessary to prepare and file a patent application.

Michael I. Kroll presents a very real challenge to the authority of the United States Patent and Trademark Office, and specifically to the Office of Enrollment and Discipline. If the Office is unable to stop Kroll from practicing why exactly should any practitioner concern themselves with OED? Why have any ethical rules?

In an agency as large as the USPTO it is a challenge — to say the least — to treat all those who interface with the Office on a fair and equal level in all instances. The variances of human interaction understandably must inform our collective understanding of our notions of equal protection. Having said that, the Office of Enrollment and Discipline has a very small case load, and the great majority of the discipline meted out in any given year is reciprocal discipline, which is where the Office imposes the same discipline handed out by another State or tribunal. Therefore, it is absolutely appropriate to demand OED to treat all practitioners equally when handing out discipline. Equal treatment with respect to practitioner discipline is simply not happening. Indeed, what OED has been doing doesn’t even come close to approximating equal treatment on the issue of practitioner discipline.

For reasons that defy explanation Michael I. Kroll has received special treatment from OED for at least a generation, during which time many other practitioners have been sanctioned for far less. Kroll has done real damage to inventors, and he has made a mockery out of USPTO ethics rules. Enough is enough.