Strong AI startup funding in China demonstrates the Chinese will be a large player in the AI sector in the coming years and could even surpass American research and development in the field. 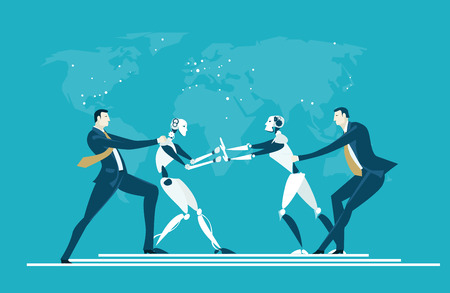 In mid-February, venture capital research firm CB Insights released an Artificial Intelligence Trends Report which showed that the United States is giving up the lead in early stage funding of AI businesses to its economic rival China. In 2017, 48 percent of the world’s entire equity funding for AI startups was located in China. The U.S. was in second-place, lagging behind at 38 percent of global equity funding for AI startups. Although the U.S. still held the lead in total AI funding as well as the largest number of AI firms, this indicates that the Chinese will be a large player in the AI sector in the coming years and could even surpass American research and development in the field.

Strong AI startup funding in China follows an increase in the publication of academic research from Chinese AI researchers. Between 2012 and 2017, the percentage of Chinese authors of all AI academic research papers presented at the annual Association for the Advancement of Artificial Intelligence conference grew from 10 percent up to 23 percent. During the same period of time, U.S. authorship of published AI research dropped from 41 percent to 34 percent. A report on this shift in international academic leadership from economists at the University of Toronto concluded that it could indicate the tough battle in AI supremacy that will likely develop between these two countries.

That increased investment into AI firms located in China and increased Chinese AI R&D would be happening is hardly surprising given that country’s efforts to improve patenting activities in relevant tech sectors. Last April, new patent examination guidelines that relaxed restrictions against software and business method patents went into effect in China. A few months later in July, China’s State Intellectual Property Office (SIPO) released new examination guidelines which streamlined the process of examining patents in various fields including next-generation information technology, the Internet, big data, cloud computing and intelligent manufacturing. These and other recent reforms have helped China’s patent system improve its score in the most recent version of the U.S. Chamber of Commerce’s Global IP Index.

Interestingly, the Quartz report on the University of Toronto AI research study notes that U.S. companies should still be in a strong position to compete in AI because of their first-mover advantage. Of course, that first-mover advantage often requires an ability to maintain technological leadership and the ability to protect R&D with patents is crucial to that first-mover scenario. In the United States, recent U.S. Supreme Court case law stemming from the court’s 2014 decision in Alice Corp. v. CLS Bank International has led to widespread uncertainty regarding the patentability of software as an abstract idea under 35 U.S.C. § 101, the basic statute for meeting patentability requirements. This uncertainty affects the AI sector in a significant way because software underpins much of what AI systems are able to achieve. An inability to protect AI-related software with patents undoes the ability for American businesses to achieve that first-mover advantage based on technological leadership.

Artificial intelligence in the cloud computing sector may be an area where Chinese companies are able to achieve some global market dominance in the years to come. Representatives from China and U.S. tech giants appearing at this January’s EmTech China event hosted by MIT Technology Review spoke about the international opportunities posed by cloud-based applications for AI as well as the sophisticated technologies developed by their own companies. This could pit major Chinese tech firms like Alibaba and Tencent into direct global competition with traditional American cloud tech leaders like Amazon and Google. Alibaba recently opened its first joint research lab focused on AI outside of China in partnership with a Singapore technical university, so Chinese tech firms are already growing their international footprint in the sector.

China’s hopes for dominance in the AI sector is also being supported by massive investment from the national government its own domestic AI industry to the tune of tens of billions of dollars in the coming years. A 2017 policy document on artificial intelligence issued by the Chinese government set natonal goals for achieving major breakthroughs in basic AI theory by 2025 on its way to becoming the world’s major artificial intelligence center by 2030. In February, The New York Times reported that at the same time that the Chinese government is making a strong play in AI, the U.S. government under President Donald Trump has pretty much abdicated from previous White House efforts on AI policy under former President Barack Obama.

If the United States cannot outpace China in artificial intelligence, it could very well pose a threat to our national security and defense. In early February, the South China Morning Post reported on China’s efforts to update the computer systems found on its nuclear submarines in order to incorporate AI that would help support the decision-making responsibilities of the country’s naval officers. Such systems could analyze variables in combat situations in a way that would reduce the mental burden placed on officers. Such a mental burden becomes an important consideration given the fact that a submarine crew could be underwater for months at a time, increasing stress levels which could lead to poor judgments in the field. These AI systems could also augment the decision-making process by suggesting naval maneuvers or more quickly identifying enemy threats.

China’s growing dominance in the global AI market should be a clear call to Washington that action needs to be taken in order to maintain the United States’ lead in innovation in a tech sector which could impact every industry. Alibaba is already developing AI systems to aid traffic planning, airport efficiency and even agriculture. Expecting the Trump Administration to go back to any Obama-era policy it wants to distance itself from, even one so important as promoting our technological dominance, could be a bridge too far. Instead, a restoration of patent rights in the software sector and the end of abstract idea challenges under Section 101 would go a long way in supporting American innovators and strengthen the first-mover advantage that startups can use to attract venture capital and scale up in the global marketplace.