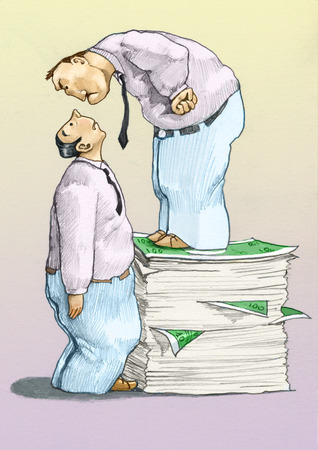 Perhaps the most concrete example most Americans refer to when they think of business monopoly is the classic case of Standard Oil, the American oil company established by John D. Rockefeller in 1870. Standard Oil grew to become one of the world’s largest multinational corporations by the early 1900s, and controlled almost unthinkable wealth.

A series of acquisitions in the oil refining sector gave Standard Oil a great enough degree of control over that aspect of the oil industry that the company was able to secure large discounts on transportation and other business expenses. This process of controlling one aspect of an entire industry’s supply chain through horizontal integration angered Standard Oil’s competitors, who produced oil on a much smaller scale and could not secure such discounts for bulk transportation themselves. Standard Oil continued to grow through vertical integration, forming a business trust, which operated across dozens of states and was able to maintain market dominance through streamlined production and lowered costs.

Standard Oil’s dominance of the oil industry continued until May 15th, 1911, when the U.S. Supreme Court decided in Standard Oil v. United States, 221 U.S. 1 (1911) that the business trust operated in violation of the Sherman Antitrust Act. The Supreme Court affirmed the dissolution of the trust, which split Standard Oil into 34 business entities, some of which continue to exist today as ExxonMobil and ConocoPhillips.

It’s certainly true that Standard Oil had a massive grip on America’s oil industry. By 1890, the company controlled 88 percent of the U.S. market for refined oil products and this market share increased to 91 percent of all American oil production by 1904. Between 1882 and 1906, this market dominance reportedly brought Standard Oil a total of $838,783,800 in net income. On an annual basis, that would mean that Standard Oil earned nearly $35 million in net income each year. Using an inflation calculator, which calculates inflation based on consumer price index data going back to the early 19th century, $35 million in 1906 equals approximately $969 million in 2017. 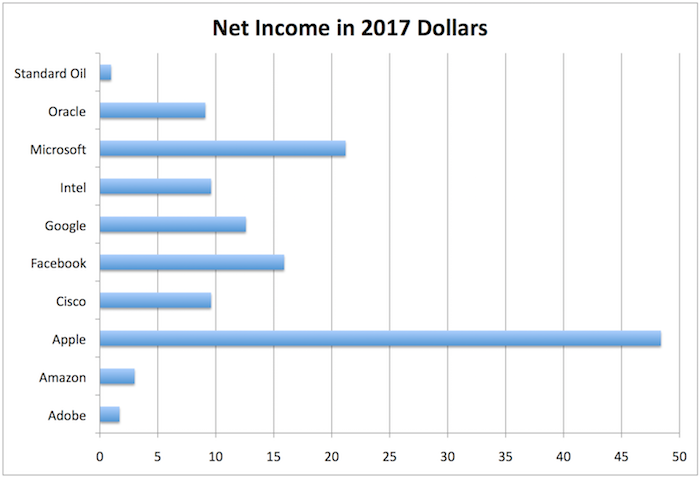 Figure 1: Net income for Standard Oil is the yearly average from 1882 to 1906, adjusted for inflation. Chart shows actual 2017 net income for other companies. Data Sources: NASDAQ and Wall Street Journal.

If 91 percent control of the oil refining industry and net income of $35 million per year was enough to break apart Standard Oil under the terms of the Sherman Antitrust Act, there are a few tech super giants that would face a similar fate if the trust-busting philosophies that held sway during the administration of President Theodore Roosevelt were en vogue today.

In January, The Wall Street Journal published an article titled The Antitrust Case Against Facebook, Google and Amazon. The article reports that these major tech firms each have greater control over certain high tech industry sectors than Standard Oil had over oil production during its heyday. For example, 95 percent of young adults using the Internet subscribe to a Facebook product, whether it’s the company’s flagship social network or other services like Instagram or WhatsApp. Google controls 89 percent of Internet searches.

If the percentage of market share for important tech sectors held by these titans wasn’t enough, the massive fortunes these companies continue to generate would seem likely to trigger at least some antitrust scrutiny. Remember, Standard Oil’s annual net earnings through 1906 earned what today would be $969 million each year in 2017 dollars, adjusted for inflation. To some of the tech super giants of today, $1 billion in profits is nothing more than pocket change.

Apple’s earnings report for the first quarter of its 2018 fiscal year, for example, showed that the consumer tech giant took in just over $20 billion for the three months ending December 30th, 2017. That’s more than 20 times the average annual net earnings of the Standard Oil trust when adjusted into today’s dollars, and Apple took that amount in over only three months, not the full year that it took Standard Oil to accumulate slightly less than $1 billion in 2017 equivalent dollars.

Moving beyond Standard Oil, there is further precedent that suggests a breakup of at least several big-tech companies would be warranted. One such case is United States v. Alcoa, decided by the Court of Appeals for the Second Circuit in 1945 with an opinion penned by Judge Learned Hand, perhaps the most influential jurist never to be appointed to the Supreme Court. In that opinion, Judge Learned Hand explained that a 60 to 64 percent market share was “doubtful” in terms of establishing a monopoly, but theorized that a 90 percent market share was certainly enough to constitute a monopoly.

The Hand rule wouldn’t trigger regulatory action for today’s tech duopolies, but would certainly support regulatory action to review Google’s hold over the online search market, as well as Facebook’s control of social media. And even if the tech super giants that form duopolies and oligopolies might not in and of themselves warrant individual regulatory attention, they have collectively cooperated very closely to suppress individuals and smaller entities by aggressively (and successfully) lobbying for weakened patent rights. But of course, it isn’t just the individual and small enterprises that have suffered. Facebook has engaged in widespread copying of SnapChat features, seemingly without consequence.

Contemplating the breakup of these tech giants as a way to promote competition is no panacea for the American economy. Critics of historic antitrust activity, especially in the Alcoa case, have noted that companies may obtain such a dominant market position not through illicit business activities but by increased investment or improved cost efficiencies. After all, while competitors may have had problems competing against Standard Oil, consumers enjoyed the cheaper oil. In a similar way, today’s tech consumers do benefit from free access to platforms developed by tech giants like Google and Facebook.

But at what cost do American’s receive these “free” platforms? Free is an interesting word, which rarely applies. Increasingly American consumers are giving up private data in order to access “free” platforms, products and services. Moreover, the real cost is impossible to know when you factor in the fact that big-tech giants routinely crowd out independents and small enterprises. Increasingly, as patent rights have weakened and antitrust enforcement has been non-existent, tech giants like Apple, Google, Facebook and others have routinely trampled on the proprietary property of others in an effort to support their largeness. What innovations have been suppressed as the result of monopolistic super-giants that make Standard Oil look like nothing more than a modestly sized enterprise?

We are watching a new era unfold before our eyes. Antitrust enforcement is nearly non-existent and patent rights are extraordinarily weak. What hope does an individual or small enterprise have against super-giants? Without a functioning patent system that provides real and enforceable rights to patent owners it becomes all the more necessary for Antitrust regulators to level the playing field.

If Standard Oil remains the benchmark for what it means to be a monopoly, which many believe it does, it is difficult to understand why U.S. Antitrust regulators are not at least asking very serious questions about the market dominance of the tech super giants and the associated suppression of smaller, truly innovative enterprises.