A Surreal Endeavor: Asserting Patent Rights in the U.S. 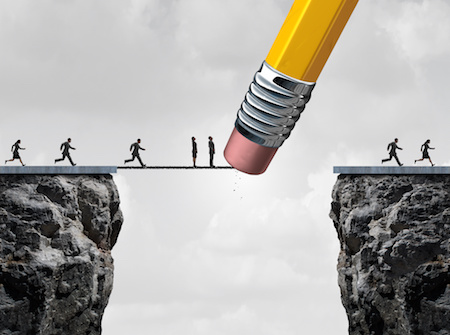 While my patent litigation practice represents both patentees and defendants, I remain concerned about developments in our patent laws that undercut protections for innovators. I continue to believe that the playing field is unfairly tipped to accused infringers.

Asserting patent rights is a surreal endeavor these days. While the statistics on survival at the PTAB are improving, with the percentage of initiated proceedings declining and some patents seeing their claims affirmed, the cost and time necessary for a patentee to claw their way back to the district court—i.e., back to Square One—proves too much for many patentees.

Spending hundreds of thousands of dollars (or more) to fight at the PTAB simply to confirm issued patent claims is pushing many patentees out of the enforcement market. With such oppressive legal hurdles and costs, what good is a patent? For many, it cannot be enforced?

Even when patentees make it to the district court, Section 101 eligibility challenges can put a quick end to a patentee’s campaign.  And, once on appeal, patentees and their counsel must grapple with how to interest the Federal Circuit in patented technology that the district court simply ignored.

One bright spot for me in last year’s battles was the Federal Circuit’s reversal of a Rule 12 dismissal in Thales Visionix v. U.S. and Elbit Systems. I hope we see more such reversals in 2018. The recent decision in Berkheimer v. HP, which acknowledged that underlying factual disputes may be present in a patent eligibility challenge, gives hope.

Since Alice, district courts have invalidated patents as abstract countless times. And, the Federal Circuit affirms over 90% of the time. More than half of these affirmances have been via Federal Circuit Rule 36, which means they are delivered without an opinion. By contrast, the Federal Circuit has reversed a trial court’s Section 101 invalidity determination fewer than ten times since 2014.

Another disturbing trend is that 90% affirmance rate for Section 101 cases also applies to cases on appeal from the PTAB. Federal Circuit review of PTAB decisions for substantial evidence is far more deferential than its purported de novo review of Section 101 invalidations. Hence, the affirmance rate should not be the same for both de novo and substantial evidence review.

The substantial deference being afforded the PTAB is making the Board an increasingly important tribunal, if not the most important and influential one in the patent world.

Innovators are looking for greener pastures.  Just the other day, IPWatchdog noted that: “For the first time since the inception of the Bloomberg Innovation Index, the United States was ranked outside the top 10 in the list, ranking 11th out of the 50 economies in the index after having placed 9th in the 2017 version… .”

Even more recently, the Global IP Center of the U.S. Chamber of Commerce released its ranking of 50 global patent systems. For the first time the U.S. patent system has fallen out of the top 10 jurisdictions. The U.S. sits in a tie for 12th place with Italy.

To reverse these trends, we need to speak up. Merely being advocates for our clients specific issues will not improve these trends. Last July, Judge Michel testified before the House Judiciary Committee’s Subcommittee on Courts, Intellectual Property and the Internet on the damage to our nation’s innovation ecosystem of AIA’s “reforms.” (See this published statement and this supplemental statement.)

Judge Michel argued that, “We have to do something or they’ll go elsewhere to invent and secure protection.” I agree. Alice and inter partes review are a deadly one-two punch for many patentees. Innovators correctly choose to locate where their innovations can be protected. Increasingly, that is not in the United States.

Last year, I worked with several inventor organizations and professors who recognize the need for change.  We filed certiorari petitions and amicus briefs highlighting cases where patentees had suffered in this new environment.  The Supreme Court denied our petitions, one right after the other. Yet, according to a 2016 report from Department of Commerce, IP intensive industries support at least 45 million jobs in the United States, and contribute more than $6 trillion dollars to the U.S. gross domestic product (GDP), which corresponds to over 38 percent of U.S. GDP. I marvel that the Court does not concern itself with protecting this country’s innovation economy.

Although eroding patent values wasn’t the intent of AIA, it is the result. I remain optimistic about the Supreme Court’s upcoming Oil States decision, but I’m discouraged at the Federal Circuit’s refusal to refine Alice and the Supreme Court’s indifference to what has happened in the wake of Alice and Mayo.

I continue to offer perspectives on these issues on my blog, Business De Novo. And in coming months, I plan to talk more frequently to owners, innovators, and attorneys, to learn their perspectives. Please don’t hesitate to contact me if you want to share perspective, or offer a comment below.

Meredith Addy Meredith Addy, co-founder of AddyHart P.C., is a deeply experienced intellectual property litigator who specializes in cases before the U.S. Court of Appeals for the Federal Circuit, in the federal [...see more]