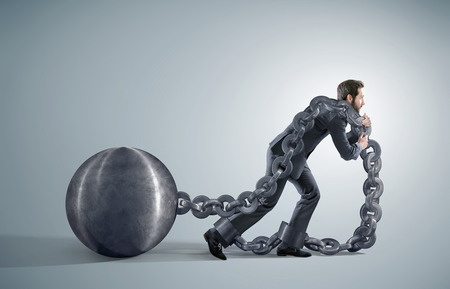 There can be no dispute that the level of business startup activity has been on the decline in the United States over the past few decades. So alarming is the downward trend that publications like the New York Times, the Wall Street Journal and others have tackled the issue in depth. Inc. Magazine has even asked whether entrepreneurship in America is dead? Still, a disturbing counter-factual narrative seems to be taking hold inside the Beltway, and on Capitol Hill. Despite all research and data to the contrary, some are actually saying that startups are on the rise, and then using carefully selected and tortured data points to claim that patent reforms are the reason for the rise in startups, and more patent reforms are needed.

Let’s begin with the facts on startups in America.

According to a recent New York Times article, the rate of company formation is half what it was 40 years ago. Columnist Eduardo Porter explained:

Most notably, the economy’s ability to generate and support new businesses — agents of creative destruction that bring new products and methods into the marketplace — appears to be faltering across the world. In the United States, the rate of company formation is half what it was four decades ago.

This stark reality that company formation is 50 percent of what it was four decades ago is particularly worrisome for the economy in light of a January 2018 Kauffman report on the economic impact of high-growth startups. According to Kauffman so-called high-growth startups account for up to 50 percent of new jobs created, and encourage subsequent employment growth in their related industries.

Many point to the Great Recession as a major reason why American entrepreneurship has taken a hit in recent years. Indeed, graphs showing the number of startups over time do reflect the fact that the number of new startups per year decreased by more than 100,000 between 2006 and 2010, the most recent low point for American startup activity. Despite some signs of economic recovery since the recession, however, American entrepreneurship does not appear to have returned in any significant way.

Modest increases in new startups since 2010 have not returned the United States to pre-recession levels of startup activity. Indeed, the United States Census Bureau reported in September 2017 that the number of startup firms created in 2015 numbered at 414,000, with some 2.5 million jobs created. According to the Census Bureau, “this level of startup activity is well below the pre-Great Recession average of 524,000 startup firms and 3.3 million new jobs per year for the period 2002-2006.”

The decline of American startups has even reached the point that the number of new companies created do not outpace the number of companies exiting the market. Statistics collected by the Brookings Institution show that the firm entry rate has remained below the firm exit rate since 2008. This marks the first time that the business creation rate has fallen below business death rates since the collection of this data began in the late 1970s. The stagnation of the American business climate is further reflected by the fact that businesses operating for 16 years or more have increased as a percentage share of all American businesses from less than 25 percent in 1993 up to nearly 35 percent in 2011 while the percentage of businesses from all other age groups has declined over time.

Moreover, an April 2017 article by the Wall Street Journal succinctly concludes: “The U.S. startup scene is languishing.” Columnist Jeffrey Sparshott wrote: “The startup slowdown also suggests a loss of dynamism across the broader U.S. economy, with Americans either less willing or less able to launch a new venture… The share of private firms less than a year old has dropped from more than 12% during much of the 1980s to only about 8% since 2010.” 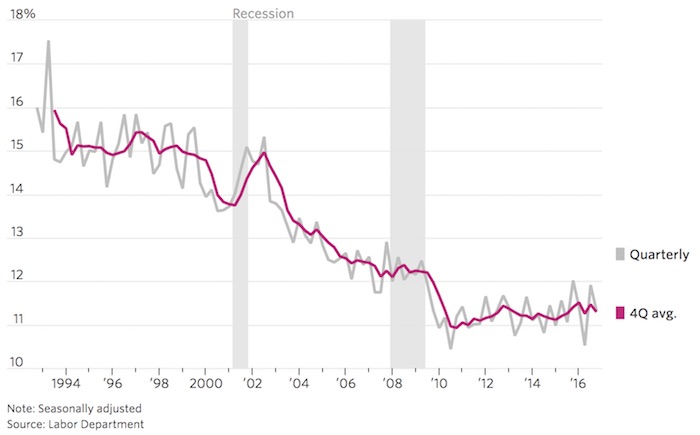 In October 2017, the New York Times published an article explaining how Amazon, Apple, Google, Facebook and Microsoft are squeezing startups out of existence. Columnist Farhad Manjoo explained that historically tech giants have been the victims of disruptive startups, but today things have changed. Manjoo explained that startups continue to be funded, but startup victory “has never been likely… and recently their chances of breakout success — and especially of knocking the giants off their perches — have diminished considerably.”

Because today’s giants are nimbler and more paranoid about upstart competition than the tech behemoths of yore, they have cleverly created an ecosystem that enriches themselves even when they don’t think of the best ideas first. The Five run server clouds, app stores, ad networks and venture firms, altars to which the smaller guys must pay a sizable tax just for existing. For the Five, the start-up economy has turned into a heads-I-win-tails-you-lose proposition — they love start-ups, but in the same way that orcas love baby seals.

According to MIT, “In a startup, a major source of value, and thus a major tool for attracting investment, is intellectual property (usually one or more patents or substantial software code).” A careful look at how Google and others have so successfully lobbied over the past decade to weaken patent rights, making it harder for disruptive innovators to both obtain and keep patents, explains why tech startups find an ecosystem that has evolved to protect market incumbents at the expense of new companies with new ideas and innovations that cannot be patented.

Given all of the signs pointing to negative trends in startup activity over the past few decades, it is very concerning to see lobby interests in Washington take the data and skew it to serve their own purposes. One such narrative circulating is that patent reforms in recent years have improved venture capital funding as well as research and development funding. Support for this counter-factual narrative comes from the same Kauffman Index data that show a decline in startups over decades. The way those pushing this false narrative reach their erroneous conclusions is by ignoring all data prior to 2012, which allows them to conveniently argue that startup activity had increased.

As data from the U.S. Census Bureau and Kauffman clearly indicate, the number of startups is well below pre-Great Recession levels, and is half of what it was four decades ago. As inconvenient as those facts may be, they are the facts.

It is also important to understand that 2012 was the lowest year for startup activity since Kauffman started tracking such data in 1996. Arguments that attempt to compare startup activity and proclaim the startup environment health that rely on 2012 as a base are wholly misguided if not disingenuously misleading. Indeed, the positive increases in startup activity following 2012 are likely nothing more than a dead cat bounce that does not speak to any actual improvement in the U.S. business environment.

It would also be disingenuous not to note the current status of the U.S. patent system when discussing the decline of the American business startup. In early February, the U.S. Chamber of Commerce released its most recent annual IP index, which showed that the United States had fallen out of the top 10 jurisdictions in terms of patent rights and enforcement, tying with Italy. Key areas of weakness for the United States include the current patent opposition system, as well as uncertain patentability in certain high-tech sectors. Indeed, the 2018 Chamber report is almost a word-for-word repeat of key weaknesses from the 2017 IP index, the key difference is the rest of the world is doing better, catching up to the U.S. or even bypassing the U.S. For example, compared to 2017, China dramatically improved its score, raising from a score of 4.35 (out of 8) in 2017 to a score of 5.5 (out of 8) in 2018.

If business startups can’t obtain patents in certain tech sectors, as is increasingly the case with software and certain biotechnology related innovations, or if they get patents that are then subsequently invalidated through the opposition system, they have enormous difficulty attracting venture capital investment, which makes success all the less likely.

The truth is simple: The only beneficiaries of weak patent rights are market incumbents. No matter how the data is tortured, it should be enormously clear that recent patent reforms have not helped startup activity in America overall. Instead, patent reforms and ill-advised decisions from the Supreme Court over the past 12 years have only contributed to the ecosystem that rewards giant tech companies, and which has solidified the market power of market incumbents at the expense of startups and small businesses.