A Poor History of Wright Brothers Concludes they were Patent Trolls 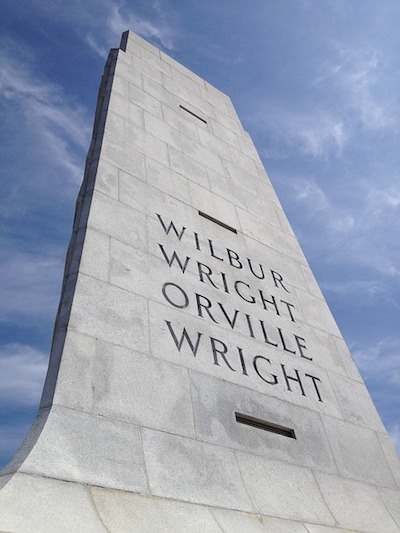 On Monday, February 5th, American economic organization The Mises Institute published an article online by Mises alumnus and economic historian Chris Calton titled How the Patent-Troll Wright Brothers Fought to Stifle Innovation. The article provides a historical look at patent litigation stemming from the Wright Brothers’ invention of an airplane control system to argue that the government’s grant of a patent serves to stifle innovation more than it incentivizes further innovation within an industry.

Starting at the beginning of this biased piece, in the first sentence of the article the author falls prey to a misconception often parroted by those with anti-patent viewpoints, namely that patent protection is a “government-granted monopoly.” Yes, the patent is granted by the government, and yes, it offers an inventor the right to exclude others from the market, but a patent provides no promise of a monopoly or any market success whatsoever. More than 90 percent of patents cover technologies that will not be commercialized. If there’s no market, there’s no monopoly. Instead, patents help to create markets by creating an enforceable property right capable of attracting investment and warding off free-riders if in fact a market does ultimately exist.

Then the author continues on to make the argument that the aviation industry of the early 20th century is perhaps the best example of the innovation-stifling effects of patents. It was at this time that the Wright Brothers began a well-known litigation campaign against foreign and domestic aviation entities. One of their most frequent patent litigation targets in the United States was Glenn Curtiss, an American innovator in both aviation and motorcycling. According to Calton, it was Curtiss who came up with the more meaningful innovations in flight, which he displayed to the public while the Wright Brothers “jealously” guarded their own innovation.

First of all, the entire act of patenting involves the public disclosure of an innovation developed in private, so if the Wright Brothers did not want any public disclosure, they wouldn’t have patented in the first place. Further, the author contends that it was Curtiss who developed the aileron, a hinged surface in the trailing end of an airplane wing which is meant to control lateral balance. However, the Wright Brothers’ U.S. Patent No. 821393, titled Flying Machine, claimed:

The Wright Brothers may not have used the word “aileron” in their patent application, but the patent claims appear as though they would cover such a device as a hinged surface capable of being positioned along the length of the wing and angled across (i.e.: transverse to) the line of flight. Indeed, many times throughout the patent, the description discusses how the invention improves the lateral control of the flying machine. Further, the patent notes that, “We wish it to be understood, however, that our invention is not limited to this particular construction, since any construction whereby the angular relations of the lateral margins of the aeroplanes may be varied in opposite directions with respect to the normal planes of aeroplanes comes within the scope of our invention.”

The Mises Institute’s author may also have benefited from doing some more research into the history of how the patent litigation campaign between the Wright Brothers and Curtiss began in the first place. Curtiss’ early aircraft designs came as a member of the Aerial Experiment Association (AEA), an aviation research group led by Alexander Graham Bell, which was founded in 1907, the year after the ‘393 patent was issued, and operated for two years. One of the AEA’s members, Thomas Selfridge, corresponded with the Wright Brothers to ask for information on aircraft construction. The Wright Brothers reportedly referred Selfridge to their patents and publications on the subject under the belief that a group led by Bell, a famed inventor himself, would respect the patent rights. Although the first plane designed by Selfridge for the AEA, the Red Wing, did not incorporate wing-warping features, which could have reasonably been covered by the Wright Brothers’ patent, other planes developed by AEA members began incorporating ailerons.

The AEA itself did not commercialize any of its developments but, as an AEA member, Curtiss designed an aircraft known as the June Bug, which won the first ever aeronautical prize offered in the United States after Curtiss flew the craft for more than one kilometer in July 1908. Although the ailerons used by the June Bug and other AEA-designed planes were configured differently than the lateral control system on the Wright Brothers’ plane, the scope of the patent owned by the Wright Brothers was not limited to that particular construction. After Curtiss won this award, Orville Wright reportedly told Curtiss that no permission had been given for use of the control system “for exhibitions or in a commercial way;” the aeronautical prize won by Curtiss came with a $25,000 cash award.

Actual litigation wouldn’t be filed by the Wright Brothers until 1909 after Curtiss sold a plane called the Golden Flier to the Aeronautic Society of New York. The legal battle was lengthy and very costly to both sides; Wilbur Wright died of typhoid fever in 1912, the year before the final verdict vindicating the brothers’ patent rights was issued. After the final verdict issued in favor of Orville Wright, Curtiss took the advice of a lawyer suggested by automaker Henry Ford, who had faced similar patent issues with inventor George Selden, to bait Orville into further litigation, which was then used as a basis to stay the earlier verdict. The fact that Curtiss would encourage further litigation as a way to draw out the case even longer makes him seem like less of a victim than the Mises Institute seems to suggest.

Indeed, what Calton stumbled on to here is the truth that patent protection encourages innovators to find ways to invent without infringing on a patent. In that way patents foster innovation by encouraging, if not demanding, other creative individuals design around patents. This is how and why patents push innovation forward. This same impetus to engineer around a patent innovation is simply not present when patents are weak and the patent system incapable of offering strong protections to innovators. That is why innovation stalls when patents are perceived as weak. Why both innovating on your own and designing around a patent when you can simply copy with impunity?

In any event, Calton is factually mistaken when he claims the Wright Brothers held up innovation. A 2013 study published by Industrial and Corporate Change challenged the notion that a “patent hold-up” among private aircraft manufacturers necessitated the U.S. government’s creation of an aviation patent pool in 1917 at the start of World War I. The study’s authors found that there was no significant patent barrier preventing aircraft manufacturers from entering the market created by government demand, despite the existence of basic aircraft patents.

Instead, the authors of this 2013 study argue that the notion of a “patent hold-up” was used by the government to induce aircraft patent owners to enter into a cross-license agreement imposing near costless tech transfer upon patent owners and benefiting the government’s position as the single buyer in a market, or monopsonist. The Wright Brothers had won a 20 percent royalty rate in their patent infringement case against Curtiss but the government’s patent pool drastically reduced royalty rates to one percent. So it appears that, if innovation in the aviation industry of the early 20th century was stagnant, government price controls may have done more to stifle innovation than any patent enforcement campaign. Amazing that an alum of the Mises Institute couldn’t pick up on that basic premise of free markets.