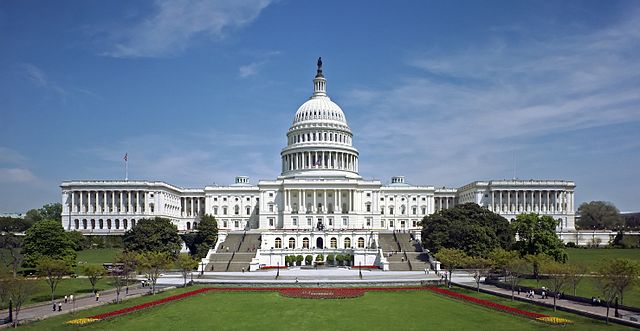 The western front of the U.S. Capitol. Public domain.

On Thursday, December 14th, the High Tech Inventors Alliance (HTIA) published an open letter which attempted to address recent criticisms regarding the current landscape of U.S. patent law, especially how recent patent reforms made both by Congress and the U.S. Supreme Court have weakened innovation in our own country. The HTIA’s open letter spouts a variety of statistics which are designed to show readers how research & development investment and venture capital funding have both increased in recent years. However, a closer look at the HTIA’s data shows gives plenty of reason to question whether these patent reforms have done more to improve the fortunes of the largest market incumbents, including those who make up the membership of the HTIA, than the majority of patent system stakeholders.

As the HTIA’s letter notes, the organization’s members, which include the likes of Amazon.com, Intel, Alphabet, Dell and Cisco, invested a collective $63 billion in R&D during 2016 and hold hundreds of thousands of patents in total. The HTIA felt that such representation gave the organization the need to respond to recent criticisms of harms to the patent system wrought by the federal government. “These criticisms of our nation’s highest court and our elected representatives simply are devoid of evidentiary support. Hyperbolic hand waving is no substitute for empirical data, and the data shows that innovation is thriving in the U.S.,” the letter reads.

The HTIA does indeed provide many data points and found that “by every significant metric,” innovation in the United States has thrived since passage of the America Invents Act (AIA) of 2011 and the Supreme Court’s 2014 decision in Alice Corporation v. CLS Bank International. The first point made by the HTIA is that, for the top 300 companies investing the most in R&D, that investment increased by 44 percent between 2012 and 2017, when those companies invested a total of $293.4 billion into R&D. So, for those top 300 companies, patent prospects seem to be positive, indeed. Further, the HTIA critiques the notion that the Supreme Court’s decision in Alice has harmed the software industry by citing to data published by PwC which shows increased investment into software research & development in recent years.

Further, the HTIA’s letter argues that venture capital funding and startup activity have grown in recent years, further proof of their view that the federal government has properly pursued patent system reforms. Using data tools available through PwC MoneyTree, the HTIA cites data indicating that venture capital investments in the U.S. have increased from $32.8 billion in 2012 up to $61 billion in 2016, representing an 86 percent increase in that time. Of course, the letter easily lets go of the fact that the graph shows that venture capital funding actually dropped significantly by about $15 billion between 2015 and 2016 alone, a point the HTIA’s own data graphs prove. As for startup activity, the HTIA collected data from the Kauffman Index of Startup Activity to make its argument that startup activity has increased by 194 percent between 2012 and 2016. Again, there’s no acknowledgement of a concerning recent data point, here the absolute stagnation of new startup activity between 2015 and 2016.

First of all, that the members of the HTIA would approve of an open letter lauding the effects of the AIA is certainly questionable given the face that, shortly after passage of that bill, those companies continued to push for further patent reforms to respond to all manner of perceived issues in the system. Members of the HTIA were involved in major lobby efforts to pass the Innovation Act through Congress. The bill included provisions on involuntary joinder, fee shifting and heightened pleading standards which some even in Congress have noted would have the effect of chilling investment towards inventors because of the increased uncertainty faced by the patent owner.

Further, it appears that the HTIA may have cherry-picked some data from at least the Kauffman Index which helps to make their argument seem rosier than it is. First of all, sure, startup activity had increased by 194 percent between 2012 and 2016. However, instead of that being seen as some meteoric rise in entrepreneurship kicked off by the AIA, a longer look at Kauffman data shows that, really, such an explosive rate of growth was required just to get the U.S. back to positive growth in startup activity. In 2012, the baseline year used by the HTIA, U.S. startup activity measured -0.8 percent on the Kauffman Index according to the 2016 Kauffman Index of Startup Activity report. Just three years prior in 2009, the Kauffman Index measured U.S. startup activity at more than 0.6 percent, marking the highest year of startup activity measured by the index going back until 1997. So in the years leading up to passage of the AIA, and likely prompted by the increased calls for patent reform by the system’s largest stakeholders, U.S. entrepreneurship looks like it was swallowed whole. It is not fantasy to suggest that even just the spectre of potential reforms hurting the prospects of patent owners would choke off entrepreneurship the way that the Kauffman Index indicates. The HTIA would likely see that too if they thought that looking at more than four years of data was somehow useful to their position. The HTIA’s rosy outlook on startup activity also fails to satisfy other recent data on startup activity which finds that, compared to startup activity in the years following other economic recessions, the rate of startup growth between 2010 and 2014 was the lowest for any four-year period following a recession including those occurring in the early ‘80s, ‘90s and ‘00s.

HTIA’s claims on venture capital funding increases also deserve to be further investigated. In January 2016, Bloomberg ran an article citing data from the National Venture Capital Association (NCVA) which found that venture capital activity was actually slowing in recent years. In May 2016, [email protected] published analysis of recent VC funding levels which indicated that VC funding fell by 11 percent in the first quarter of 2016 compared to the first quarter of 2015. This number comes from analysis of PwC Money Tree, the same tools used by the HTIA to come up with their much rosier outlook on recent VC funding. Finally, the HTIA’s statistics on R&D investments among the top 300 R&D firms cannot be conflated with the prospects of startup activity at all, given the fact that no startup would be among those top 300 R&D firms unless they were propped up by the significant cash resources of the tech cartel.

That the HTIA would so slavishly work to promote a narrative friendly to the efficient infringer lobby is not surprising. The fact that it would do so in a way which is easily discreditable isn’t shocking either given how HTIA representatives have relied on poorly reasoned arguments to make their anti-patent views clear. This includes misrepresentations made by HTIA’s general counsel John Thorne in a September panel discussion at Duke Law where he interpreted Philip Hamburger’s Is Administrative Law Unlawful? in such a way that gave Hamburger reason to refute Thorne’s arguments in public. Of course, this is the same John Thorne who, while serving as VP and general counsel for Verizon Communications throughout the ‘00s, engaged in a legal strategy against Cablevision in which Verizon acquired patents to assert without practicing the technology in a bid to force Cablevision into a licensing agreement over HD sports channels in New York City. That Thorne would now be advocating to retain existing law which protects an agency that renders 90 percent of challenged patents defective is a real clear indication of the man’s character as his viewpoint on patent law is seemingly one which can be pro- or anti-patent depending on who writes the paychecks. That the HTIA would allow such easily refutable data points to serve as its major argument for keeping recent Congress and Supreme Court precedent on U.S. patent law in place is a likely sign that the organization and its members are actually showing signs of insecurity in their ability to shape the current patent reform debate.