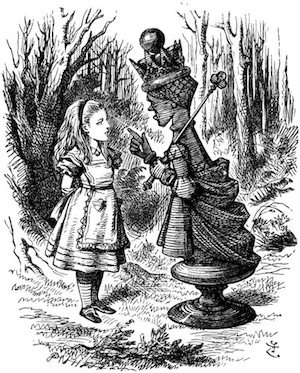 Illustration by John Tenniel of the Red Queen lecturing Alice, circa 1870.

On December 8, 2017, the U.S. Court of Appeals for the Federal Circuit issued a precedential decision in Inventor Holdings, LLC v. Bed Bath & Beyond, Inc. (2016-2442) that provides some useful language to practitioners dealing with patent ineligibility rejections having Alice as their basis.

In Inventor Holdings the Federal Circuit affirmed an award of attorneys fees under Octane Fitness against a business method patentee who filed suit before the Supreme Court decided Alice. The Federal Circuit affirmed the award because Inventor Holdings did not “reassess” its case in light of Alice and at that point decide sua sponte that its claims were “objectively without merit”. This was done despite the fact that business methods are not unpatentable per se and, as Inventor Holdings itself argued, it was still reasonable post-Alice to believe its patent covered eligible material because Section 101 “was, and is, an evolving area of law and… the § 101 inquiry in this case was therefore difficult.”

But in so holding, the Federal Circuit also provided some very useful language that could be used by patent prosecutors and litigators alike in an attempt to overcome Alice:

“Prior to Alice, the state of the law for computer-implemented business transaction inventions was less than clear, given this court’s divided en banc opinion in CLS Bank International v. Alice Corp., 717 F.3d 1269, 1273 (Fed. Cir. 2013). As we later explained, post-Alice, in Mortgage Grader, Inc. v. First Choice Loan Services Inc., ‘a § 101 defense previously lacking in merit may be meritorious after Alice. This scenario is most likely to occur with respect to patent claims that involve implementations of economic arrangements using generic computer technology, as the claims do here.’ 811 F.3d 1314, 1322 (Fed. Cir. 2016). Like the claims at issue in Mortgage Grader, the [claims at issue] are directed to an ‘economic arrangement’ implemented using ‘generic computer technology.’ These issues were significant, if not determinative, of the Court’s holding in Alice.” [emphasis added]

The Federal Circuit then went on to state that the claims at issue in Inventor Holdings do not “require us to engage in a difficult line-drawing exercise for a claimed invention resting on, or anywhere near, the margins of patent-eligibility; rather, the patent claims here are directed to a fundamental economic practice, which Alice made clear is, without more, outside the patent system… In addition, here, as in Alice, the patentee is attempting to broadly monopolize an abstract idea as implemented using generic computer technology. IH’s asserted claims were plainly invalid in view of Alice and its reasoning.” [emphasis added]

In making these statements, Inventor Holdings is in accord with heavily-cited Enfish, LLC v. Microsoft Corp., 822 F.3d 1327 (Fed. Cir. 2016). In Enfish, the Federal Circuit observed that claims directed to an improvement to computer functionality are patent-eligible, as opposed to “economic or other tasks for which a computer is used in its ordinary capacity.” Enfish further explained that claims directed to computer improvements are different from those directed to economic arrangements where it stated that “the claims at issue in Alice and Versata can readily be understood as simply adding conventional computer components to well-known business practices” and hence “we are not faced with a situation [here] where general-purpose computer components are added post-hoc to a fundamental economic practice or mathematical equation. Rather, the claims [at issue] are directed to a specific implementation of a solution to a problem in the software arts. Accordingly, we find the claims at issue are not directed to an abstract idea.” [emphasis added]