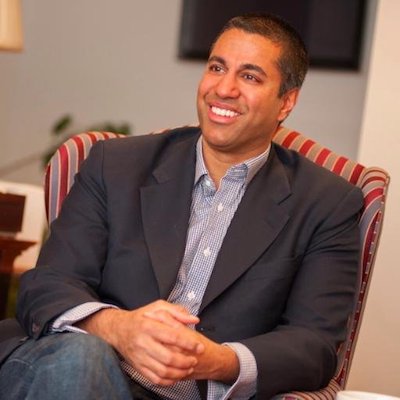 Ajit Pai, Chairman of the FCC

On Thursday, December 14th, the commissioners of the Federal Communications Commission (FCC) will convene an open meeting to discuss several subjects, one of which is titled Restoring Internet Freedom. According to news reports, the FCC is likely to approve this order in a 3-2 vote along party lines to return the classification of broadband Internet access service to its prior classification as information service. The order would also reduce regulations on mobile broadband services and restore the authority of the Federal Trade Commission (FTC) as the agency in charge of policing Internet service provider (ISP) privacy practices.

Despite the high likelihood that the order will be passed by the FCC’s commissioners, or maybe more because of that likelihood, there has been a lot of recent press on how the FCC under current Chairman Ajit Pai has drawn the ire of net neutrality supporters. The New York Times recently reported on hundreds of protests being held ahead of the FCC’s December 14th vote and how organizations supporting net neutrality have been using social media to foment opposition to Pai. News headlines have been rife with doomsday predictions that the plans to reclassify broadband Internet as an information service will “ruin the Internet,” “kill the careers of indie musicians” and some have even suggested that the reclassification will negatively impact those with disabilities.

Given all this negative feedback over the repeal of what many feel is a basic tenet of net neutrality principles, it would be interesting to know what reasoning Chairman Pai is employing in rescinding aspects of the 2015 Open Internet Order put in place by former FCC Chairman Tom Wheeler. In an opinion piece published this April by The Los Angeles Times, Pai argued that fears over fears regarding the potential of fast and slow lanes on the Internet led to the adoption of an old regulatory framework meant to control former monopolies like Bell System in a way that has negatively impacted both ISPs and the rollout of American broadband infrastructure. Research released this March indicates that the top 12 broadband Internet firms, including entities like AT&T (NYSE:T), Verizon (NYSE:VZ) and Comcast (NASDAQ:CMCSA), reduced their domestic broadband capital expenditures by $3.6 billion relative to 2014, the last year in which ISPs were not affected by Title II regulations. That amount represented a 5.6 percent decline in broadband infrastructure during the time in which ISPs were classified as Title II utilities.

It’s not just large ISP entities who are finding their fortunes to be negatively impacted under Title II regulations. On December 8th, the FCC issued a press release to announce that Chairman Pai had spoken with a series of executives from small ISPs from rural areas in Minnesota, Montana, North Dakota and elsewhere to hear their concerns on how Title II regulation under the current net neutrality regime has impacted their ability to build broadband infrastructure. In the release, Pai said that common themes of those discussions included how Title II regulations have both slowed investments and injected regulatory uncertainty into the business plans of ISPs. Specific instances mentioned include increased costs stemming from increased time spent with lawyers and increased interest rates from banks for financing. Multiple executives noted that increased costs have led to a reduced capability to lay new fiber optic cable or just generally improving investments in consumer services.

“At a time when small rural providers are seeing decreasing federal and state universal service support while subject to increasing deployment obligations, overly restrictive privacy requirements that necessitate expensive compliance programs will only divert funds towards regulatory compliance and away from broadband buildout in rural areas where such investment is critically needed.”

Along with increased costs, WTA noted that providing different regulatory standards to broadband Internet access services than are applied to other participants in the online ecosystem, including social media and search engines, could create consumer confusion as to which heightened standards applied to which Internet companies. Further, WTA asked the FCC to consider calibrating rules and expectations with the regulatory activity of the FTC, the agency which regulated ISP business activity prior to the Open Internet Order.

The fact that the Title II regulatory regime has hurt investment into Internet broadband infrastructure deployment for large and small ISPs alike seems remarkable given at least some of the reasoning behind the FCC’s 2015 Open Internet Order. The official order cites to the 2015 Broadband Progress Report, an FCC document released in February 2015 which concluded that broadband deployment, “especially in rural areas,” was failing to keep pace with the state of tech developments in the field. In those rural areas, 22 million Americans, or 53 percent of the country’s rural population, lacked access to Internet which could provide download speeds of 25 megabits per second (Mbps) and upload speeds of 3 Mbps. By contrast, only 8 percent of the country’s urban population lacked access to such services.

Further, the language of the Open Internet Order itself seems to contemplate how beneficial the order would be to the rollout of broadband infrastructure in rural areas. In reclassifying broadband Internet access services as Title II common carriers, Tom Wheeler’s FCC exercised broad forbearance of Title II rules in an attempt to create a light-touch regulatory framework. In finding that the statutory test for forbearance from 47 U.S.C. § 254, which governs the FCC’s regulatory approach to universal service, was met by the order, the FCC determined that the application of Section 254 provides legal certainty for offering service subsidies for the deployment of broadband networks, “including rural and low-income Americans.” In contemplating why the FCC was compelled to act to preserve an open Internet, the agency opined that the rules “are also critical for ensuring that people living and working in rural areas can take advantage of the substantial benefits that the open Internet has to offer.” It seems worth questioning, given the effects of Title II reclassification of broadband Internet access services on rural providers, whether the rules are achieving what they were supposed to achieve.

Analysis of the impact of open Internet rules on the cable industry calls the effects of the rules on competition among companies in the cable industry into question. A piece published in September 2015 by The Wall Street Journal discussed the effects of FCC regulatory activity on the cable and mobile industries, concluding that regulations in the telecommunications industry had done a better job of aiding industry incumbents in the broadband Internet market than they did at increasing competition in the sector. “[I]t will be a surprise to those net-neut advocates who made cable their whipping boys, and who now discover regulation is actually strengthening rather than weakening cable’s hold on the broadband business,” the article reads.