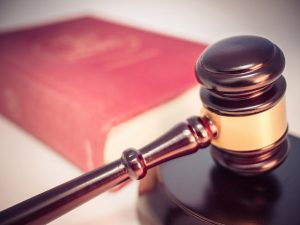 In late November, legal data analytics firm Lex Machina released its 2017 Trademark Litigation Report, which identifies trends in the current landscape regarding trademark litigation in U.S. district courts. The report covers various topics including types and amount of damages awards, top parties on the plaintiff and defendant side as well as the most popular jurisdictions in which trademark cases are filed. 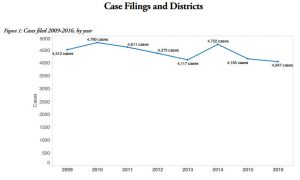 Overall, trademark litigation since 2009 has been remarkably stable, especially when compared to other areas of intellectual property litigation. Trademark case filings have generally declined between 2009 and 2016 and case filing activity within a single year has ranged from 4,000 cases filed up to 4,800 filings. By contrast, patent litigation reports from Lex Machina have shown a great deal of volatility in patent case filings over the same period of time. Quarterly intellectual property litigation reports released by Lex Machina have also indicated volatility in copyright suit filings regarding file sharing cases. There is one spike in trademark litigation that came in the third quarter of 2014 but those cases are related to a campaign by former National Football League players suing the NFL for the use of their likeness in films.

Analysis of claim overlaps in trademark cases show that trademark cases overlap most commonly with commercial claims; such claims are included in 8,502 cases out of the entire 38,486 trademark cases filed between January 2009 and October 2017. Commercial cases tracked by Lex Machina include business-to-business disputes involving breach of contract or some form of business tort claim, notes Lex Machina data scientist Brian Howard. “They may be doing some sort of joint venture or they may develop products together, and then in addition to a business dispute there’s a fight over the IP related to the product as well,” he said. False advertising, copyright and cybersquatting claims also saw a fair amount of overlap with trademark cases.

The leading plaintiff parties filing the most trademark cases tend to be high-end brand owners, especially fashion brands. The top plaintiff in trademark cases since 2009 has been fashion brand Coach Services, which has filed a total of 758 cases during that timeframe. That’s nearly twice as many cases filed by second-place Chanel, another fashion brand owner which has filed 389 trademark cases since 2009. Although Chanel and Coach produce luxury goods, Howard notes that most of the plaintiffs represent high-end brands, not necessarily just owners of luxury goods brands. “A lot of cases come from companies whose logo may be misused,” Howard said. “That’s why AAA is on there, a lot of people use the logo when they’re not entitled to it.” The American Automobile Association (AAA) is fifth in trademark case filings since 2009 with 229 suits.

Sream Inc. has been the third-most active plaintiff since 2009 but the company has filed a great majority of its cases over the past year-and-a-half. The 227 cases filed by Sream between January 2016 and October 2017 is a total which is multiples higher than the number of suits filed by any other entity; second-place Chanel filed 70 cases during that span. Sream is the American licensee making water pipes used for recreational smoking purposes which are sold under the German brand name RooR. As Howard notes, this high level of case filing activity may not be so much a function of Sream policing its trademarks more closely as much as it is a product of evolving state-level law on the legality of marijuana. “With the spread of legalization and the availability of medical marijuana, I would imagine that their products are being sold far more than ever before, leading to them being ripped off more than ever before,” Howard said.

Compared to the top plaintiffs in trademark cases, the top defendant parties tend to be involved in fewer cases, Outside of first-placed National Football League (549 cases), top defendants tended to be retail platforms where you might find generic competition to branded items. This includes both e-commerce platforms like Amazon.com (third place, 100 cases) and Google (seventh place, 55 cases) and brick-and-mortar stores like Wal-Mart (fourth place, 80 cases). Syngenta Corporation has the distinction of being both second place among top defendants with 274 cases filed against it since the beginning of 2009 but also the owner of the sixth-place defendant, Syngenta Biotechnology (58 cases). Howard notes that, while retail platforms tend to bubble towards the top, there is a long tail of individual parties, many of them anonymous, who are targeted in trademark suit filings. 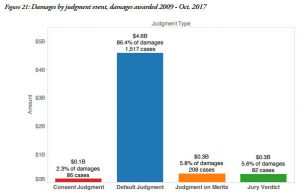 Looking at the types of damages being awarded in trademark cases and how they’re being awarded, it’s highly likely that most damages awarded in these cases might never be recovered. “You can see it as two separate worlds of trademark cases,” Howard said. “There are cases in which a defendant doesn’t show up and it goes straight to default judgment, and then there’s everything else.” $4.6 billion dollars, or 84.6 percent of all 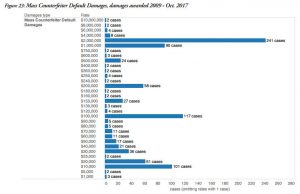 should I ask for?’” Howard said. “It seems like $2 million is a pretty darned good number to ask for in terms of how often the court has granted that rate per defendant.”

When separating default and consent judgments from other judgment types, the parties winning trademark damages via jury verdict or judgment on the merits look much different than the parties earning the most damages overall. “If the question is, ‘Who has a higher 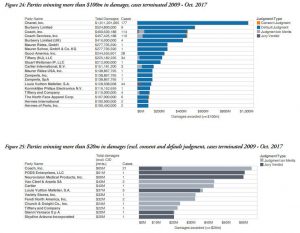 chance of collecting money?’, these are parties winning cases that don’t end in default but they’re still getting money awards,” Howard said. While Chanel and clothing apparel firm Burberry Limited are earning the largest damages awards overall, neither of them appear in the top 12 parties earning damages after jury verdicts or judgments on the merits. The top party in that regard is Coach, which was won $65 million in damages from those two events, with most damages coming after a judgment on the merits.